County Galway ( /ˈɡɔːlweɪ/ GAWL-way; Irish: Contae na Gaillimhe) is a county in Ireland. It is in the West of Ireland, taking up the south of the province of Connacht. 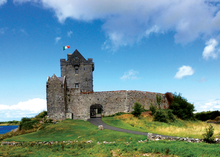 The first inhabitants in the Galway area arrived over 7000 years ago. Shell middens indicate the existence of people as early as 5000 BC.

The county originally comprised several kingdoms and territories which predate the formation of the county. These kingdoms included Aidhne, Uí Maine, Maigh Seóla, Conmhaícne Mara, Soghain and Máenmaige. County Galway became an official entity around 1569 AD. [7] The region known as Connemara retains a distinct identity within the county, though its boundaries are unclear, and so it may account for as much as one third, or as little as 20%, of the county.

The county includes a number of inhabited islands, such as the Aran Islands ( Irish: Oileáin Árann) and Inishbofin (Inis Bó Fine).

With the arrival of Christianity many monasteries were built in the county. Monasteries kept written records of events in the area and of its people. These were followed by a number of law-tracts, genealogies, annals and miscellaneous accounts. Extant manuscripts containing references to Galway include:

Nearly 20% of the population of County Galway live in the Gaeltacht (Irish-speaking districts). County Galway is home to the largest Gaeltacht Irish-speaking region in Ireland. There are over 48,000 people living within this region, which extends from Galway city westwards through Connemara. The region consists of the following Irish-speaking areas: Galway City Gaeltacht (parts of the city), Gaeltacht Cois Fharraige, Conamara Theas, Aran Islands, and Duiche Sheoigheach (a part of the northern Galway region known as "Joyce Country" and Maam Valley).

All schools within the Gaeltacht use the Irish language for classroom instruction. There is also a third-level constituent college of NUIG called Acadamh na hOllscolaíochta Gaeilge in Carraroe and Carna. Clifden is the largest town in the region. Galway City is also home to Ireland's only Irish-language theatre, Taibhdhearc na Gaillimhe. There is a strong Irish-language media presence in this area too, which boasts the radio station Raidió na Gaeltachta and Foinse newspaper in Carraroe and national TV station TG4 in Baile na hAbhann. The Aran Islands are also part of the Galway Gaeltacht.

According to Census 2016, there were 84,249 people in County Galway who could speak Irish. [14] According to Census 2011, the Galway city and county Gaeltacht has a population of 48,907, of which 30,978 said they could speak Irish; 23,788 can be classed as native Irish speakers, while 7,190 speak Irish daily only within the classroom. There are 3,006 attending the ten Gaelscoil (Irish language primary schools) and three Gaelcholáiste (Irish language secondary schools) outside the Galway Gaeltacht. [15] According to the Irish Census 2016, there are 9,445 people in the county who identify themselves as being daily Irish speakers outside the education system. [14] 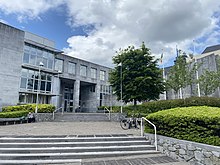 Galway City Council and Galway County Council are the local authorities for the respective local government areas. The local government area of County Galway includes some suburbs of the city not within the city area. Each local authority is responsible for certain local services such as sanitation, planning and development, libraries, the collection of motor taxation, local roads and social housing.

County Galway is home to Na Beanna Beola ( Twelve Bens) mountain range, Na Sléibhte Mhám Toirc (the Maum Turk mountains), and the low mountains of Sliabh Echtghe (Slieve Aughty). The highest point in the county is one of the Twelve Bens, Benbaun, at 729m.

The location of County Galway, situated on the west coast of Ireland, allows it to be directly influenced by the Gulf Stream. Temperature extremes are rare and short lived, though inland areas, particularly east of the Corrib, can boast some of the highest recorded temperatures of the summer in the island of Ireland (sometimes exceeding 30 °C); though these temperatures only occur when land warmed east winds sweep the area; the opposite effect can occur in the winter. Overall, however, Galway is influenced mainly by Atlantic airstreams which bring ample rainfall in between the fleeting sunshine. Rainfall occurs in every month of the year, though the late autumn and winter months can be particularly wet as Atlantic cyclonic activity increases and passes over and around the area, and which is why Galway tends to bear the brunt of severe windstorms that can occur between August and March. The county on average receives about 1300mm of rainfall annually, though some areas along the west coast of the county can receive up to 1900mm and beyond. Extreme weather such as blizzards, thunderstorms, flash flooding and hail, though rare, can and do occur, particularly when air masses of continental origin are undercut by more humid and unstable Atlantic flows.

One of the least densely populated counties, County Galway harbors a variety of wildlife. The region's biodiversity is best represented by Connemara National Park, situated in the west of the county.

See also: List of towns and villages in County Galway

According to numbers published by Galway Chamber of Commerce in early 2019, there were then 196 information and communications technology (ICT) organisations in Galway, including IBM, SAP, Oracle and Cisco. [22] There is a number of medical device companies in the area, including Medtronic (with approximately 1,800 employees) and Boston Scientific (2,800 employees). [22]

Gaelic games are the most popular sport in the county. Galway had traditional regions in which Gaelic football or hurling is played. For example, in south and eastern County Galway, in places such as Portumna, Gort, Clarinbridge and Athenry, hurling is the dominant sport with successful teams at county and national level. Most of the rest of the county is considered to be footballing territory, with most of the county players being from The Tuam area, Oughterard, Moycullen or parts of Galway city.

Connacht Rugby competes in the United Rugby Championship is based in Galway city. The two main amateur rugby clubs in the county are Galway Corinthians RFC and Galwegians RFC which compete in the All-Ireland League.

Wikivoyage has a travel guide for County Galway.

Wikisource has the text of a 1906 New International Encyclopedia article about " County Galway".