From Wikipedia, the free encyclopedia
(Redirected from Countability)
Mathematical set that can be enumerated
"Countable" redirects here. For the linguistic concept, see Count noun. For the statistical concept, see Count data. For the company, see Countable (app). Not to be confused with (recursively) enumerable sets.

In mathematics, a set is countable if either it is finite or it can be made in one to one correspondence with the set of natural numbers. [a] Equivalently, a set is countable if there exists an injective function from it into the natural numbers; this means that each element in the set may be associated to a unique natural number, or that the elements of the set can be counted one at a time, although the counting may never finish due to an infinite number of elements.

In more technical terms, assuming the axiom of countable choice, a set is countable if its cardinality (its number of elements) is not greater than that of the natural numbers. A countable set that is not finite is said countably infinite.

The concept is attributed to Georg Cantor, who proved the existence of uncountable sets, that is, sets that are not countable; for example the set of the real numbers.

A note on terminology

Although the terms "countable" and "countably infinite" as defined here are quite common, the terminology is not universal. [1] An alternative style uses countable to mean what is here called countably infinite, and at most countable to mean what is here called countable. [2] [3] To avoid ambiguity, one may limit oneself to the terms "at most countable" and "countably infinite", although with respect to concision this is the worst of both worlds.[ citation needed] The reader is advised to check the definition in use when encountering the term "countable" in the literature.

The terms enumerable [4] and denumerable [5] [6] may also be used, e.g. referring to countable and countably infinite respectively, [7] but as definitions vary the reader is once again advised to check the definition in use. [8]

The most concise definition is in terms of cardinality. A set

is countable if its cardinality

is less than or equal to

( aleph-null), the cardinality of the set of natural numbers

is countably infinite if

. A set is uncountable if it is not countable, i.e. its cardinality is greater than

; the reader is referred to Uncountable set for further discussion. [9]

, the following propositions are equivalent:

Similarly, the following propositions are equivalent:

In 1874, in his first set theory article, Cantor proved that the set of real numbers is uncountable, thus showing that not all infinite sets are countable. [17] In 1878, he used one-to-one correspondences to define and compare cardinalities. [18] In 1883, he extended the natural numbers with his infinite ordinals, and used sets of ordinals to produce an infinity of sets having different infinite cardinalities. [19]

A set is a collection of elements, and may be described in many ways. One way is simply to list all of its elements; for example, the set consisting of the integers 3, 4, and 5 may be denoted {3, 4, 5}, called roster form. [20] This is only effective for small sets, however; for larger sets, this would be time-consuming and error-prone. Instead of listing every single element, sometimes an ellipsis ("...") is used to represent many elements between the starting element and the end element in a set, if the writer believes that the reader can easily guess what ... represents; for example, {1, 2, 3, ..., 100} presumably denotes the set of integers from 1 to 100. Even in this case, however, it is still possible to list all the elements, because the number of elements in the set is finite. If we number the elements of the set 1,2, and so on, up to

, this gives us the usual definition of "sets of size

Bijective mapping from integer to even numbers

Some sets are infinite; these sets have more than

is any integer that can be specified. (No matter how large the specified integer

, infinite sets have more than

elements.) For example, the set of natural numbers, denotable by {0, 1, 2, 3, 4, 5, ...}, [a] has infinitely many elements, and we cannot use any natural number to give its size. It might seem natural to divide the sets into different classes: put all the sets containing one element together; all the sets containing two elements together; ...; finally, put together all infinite sets and consider them as having the same size. This view works well for countably infinite sets and was the prevailing assumption before Georg Cantor's work. For example, there are infinitely many odd integers, infinitely many even integers, and also infinitely many integers overall. We can consider all these sets to have the same "size" because we can arrange things such that, for every integer, there is a distinct even integer:

(see picture). What we have done here is arrange the integers and the even integers into a one-to-one correspondence (or bijection), which is a function that maps between two sets such that each element of each set corresponds to a single element in the other set. This mathematical notion of "size", cardinality, is that two sets are of the same size if and only if there is a bijection between them. We call all sets that are in one-to-one correspondence with the integers countably infinite and say they have cardinality

Georg Cantor showed that not all infinite sets are countably infinite. For example, the real numbers cannot be put into one-to-one correspondence with the natural numbers (non-negative integers). The set of real numbers has a greater cardinality than the set of natural numbers and is said to be uncountable.

By definition, a set

is countable if there exists a bijection between

and a subset of the natural numbers

. For example, define the correspondence

Since every element of

is paired with precisely one element of

, and vice versa, this defines a bijection, and shows that

is countable. Similarly we can show all finite sets are countable.

As for the case of infinite sets, a set

is countably infinite if there is a bijection between

. As examples, consider the sets

, the set of positive integers, and

, the set of even integers. We can show these sets are countably infinite by exhibiting a bijection to the natural numbers. This can be achieved using the assignments n ↔ n+1 and n ↔ 2n, so that

Theorem — A subset of a countable set is countable. [21]

is countably infinite, as can be seen by following a path like the one in the picture: 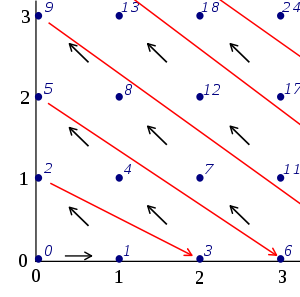 The resulting mapping proceeds as follows:

This mapping covers all such ordered pairs.

This form of triangular mapping recursively generalizes to

are natural numbers, by repeatedly mapping the first two elements of an

-tuples to the set of natural numbers

is proved. For the set of

-tuples made by the Cartesian product of finitely many different sets, each element in each tuple has the correspondence to a natural number, so every tuple can be written in natural numbers then the same logic is applied to prove the theorem.

Theorem — The Cartesian product of finitely many countable sets is countable. [22] [b]

The set of all integers

and the set of all rational numbers

may intuitively seem much bigger than

. But looks can be deceiving. If a pair is treated as the numerator and denominator of a vulgar fraction (a fraction in the form of

are integers), then for every positive fraction, we can come up with a distinct natural number corresponding to it. This representation also includes the natural numbers, since every natural number

is also a fraction

(the set of all integers) and

(the set of all rational numbers) are countable. [c]

In a similar manner, the set of algebraic numbers is countable. [24] [d]

Sometimes more than one mapping is useful: a set

is proved as countable if

With the foresight of knowing that there are uncountable sets, we can wonder whether or not this last result can be pushed any further. The answer is "yes" and "no", we can extend it, but we need to assume a new axiom to do so.

For example, given countable sets 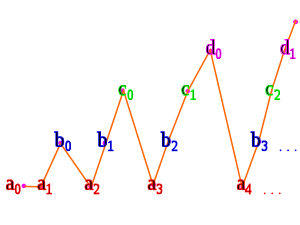 Using a variant of the triangular enumeration we saw above:

This only works if the sets

are disjoint. If not, then the union is even smaller and is therefore also countable by a previous theorem.

Theorem — The set of all finite-length sequences of natural numbers is countable.

Theorem — The set of all finite subsets of the natural numbers is countable.

These follow from the definitions of countable set as injective / surjective functions. [g]

Cantor's theorem asserts that if

is a set and

is its power set, i.e. the set of all subsets of

, then there is no surjective function from

. A proof is given in the article Cantor's theorem. As an immediate consequence of this and the Basic Theorem above we have:

is not countable; i.e. it is uncountable.

For an elaboration of this result see Cantor's diagonal argument.

The set of real numbers is uncountable, [h] and so is the set of all infinite sequences of natural numbers.

If there is a set that is a standard model (see inner model) of ZFC set theory, then there is a minimal standard model (see Constructible universe). The Löwenheim–Skolem theorem can be used to show that this minimal model is countable. The fact that the notion of "uncountability" makes sense even in this model, and in particular that this model M contains elements that are:

was seen as paradoxical in the early days of set theory, see Skolem's paradox for more.

The minimal standard model includes all the algebraic numbers and all effectively computable transcendental numbers, as well as many other kinds of numbers.

Countable sets can be totally ordered in various ways, for example: