From Wikipedia
https://en.wikipedia.org/wiki/Costume_designer
Person who designs costumes for a film, stage production or television show 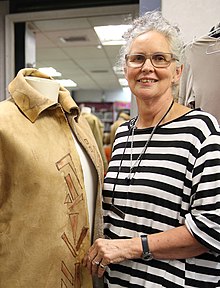 Designers typically seek to enhance a character's personality, and to create an evolving plot of color, changing social status, or period through the visual design of garments and accessories.[ citation needed] They may distort or enhance the body—within the boundaries of the director's vision. The designer must ensure that the designs let the actor move as the role requires. The actor must execute the director's blocking of the production without damaging the garments. Garments must be durable and washable, especially for plays with extended runs or films with near- real time pacing (meaning that most costumes will not change between scenes) but whose principal photography phase may stretch across several weeks. The designer must consult not only with the director, but the set and lighting designers to ensure that all elements of the overall production design work together. The designer must possess strong artistic capabilities and a thorough knowledge of pattern development, draping, drafting, textiles and fashion history. The designer must understand historical costuming, and the movement style and poise that period dress may require.

During the late-19th century, company managers in the US usually selected costumes for a show. Many were pulled from a rental houses, only a few were designed. Though designers in other theatrical disciplines were recognized, few who specialized in costumes were. The few that were included Caroline Siedle, C. Wilhelm, Percy Anderson, and Mrs. John Alexander. They sometimes even received credit on the title page of a playbill rather than in the back. [2]

In the 20th century, film costume designers like Edith Head and Adrian became well known. Edith Head (born Edith Claire Posener),went on and won eight Academy Awards for Best Costume Design between 1949 and 1973.Later, those working in television like Nolan Miller ( Dynasty), Janie Bryant ( Mad Men), and Patricia Field ( Sex and the City) became more prominent, some becoming authors and having their own clothing and jewelry lines. [3]

Both residential and academic designers are generally also required to act as Shop Master or Mistress of an onsite costume shop, in addition to designing productions. In a resident theatre, there is almost always a shop staff of stitchers, [4] drapers, cutters and craft artisans. In an academic environment the shop "staff" is generally students, who are learning about costume design and construction. Most universities require costume design students to work a specified number of hours in the shop as part of their course work.

Unions in the United States and Canada

The International Alliance of Theatrical Stage Employees is the sole union in the United States and Canada that represents costume designers. It has two local unions that costume designers can belong to: