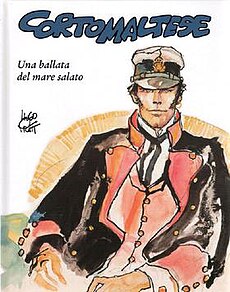 Corto Maltese is a series of adventure and fantasy comics named after the character Corto Maltese, an adventurous sailor. It was created by the Italian comic book creator Hugo Pratt in 1967. The comics are highly praised as some of the most artistic and literary graphic novels ever written and have been translated into numerous languages and adapted into several animated films.

The series features Corto Maltese, an enigmatic sea captain who lives in the first three decades of the 20th century. Born in Valletta on the island of Malta on 10 July 1887, the son of a sailor from Cornwall, and a gypsy from Seville.

In his adventures full of real-world references, Corto has often crossed with real historical characters like the American author Jack London and his nurse Virginia Prentiss, the American outlaw Butch Cassidy, the German World War I flying ace Red Baron, and many others.

The character debuted in the serial Ballad of the Salty Sea, one of several Pratt stories published in the first edition of the magazine Sergeant Kirk in July 1967. [1] The story centers around smugglers and pirates in the World War I-era Pacific Islands. In 1970, Pratt moved to France and began a series of short Corto Maltese stories for the French magazine Pif Gadget, an arrangement lasting four years and producing many 20-page stories. In 1974 he returned to full-length stories, sending Corto to 1918 Siberia in the story Corto Maltese in Siberia, first serialised in the Italian comics magazine Linus.

In 1976, Ballad of the Salty Sea was published in book format and was awarded the prize for best foreign realistic comic album at the Angoulême International Comics Festival. [2]

Pratt continued to produce new stories over the next two decades, many first appearing in the eponymous comics magazine Corto Maltese, until 1988 when the final story Mu, the Lost Continent was serialised, ending in June 1989.

On October 7, 2014, Italian publisher Cong, who owns the rights to Corto Maltese, announced that a new album was being made by writer Juan Díaz Canales and artist Rubén Pellejero. [3] "Under the Midnight Sun" was released in Europe on September 30, 2015 and takes place in 1915. In September 2017, a second album, "Equatoria" set in 1911 was published. In November 2019, a third album, "All Saints Day" set in 1912–1913 was published. The fourth album by Canales and Pellejero was published in September 2022, entitled "Berlin Nocturne". It takes place in Berlin and Prague in 1924.

Corto Maltese (whose name derives from the Andalusian Argot and means "quick hands") is a laconic sea captain adventuring during the early 20th century (1900–1920s). A "rogue with a heart of gold", he is tolerant and sympathetic to the underdog. Born in Valletta on July 10, 1887, he is the son of a British sailor from Cornwall and an Andalusian– Romani [4] witch and prostitute known as "La Niña de Gibraltar". As a boy growing up in the Jewish quarter of Córdoba, Maltese discovered that he had no fate line on his palm and therefore carved his own with his father's razor, determining that his fate was his to choose. Although maintaining a neutral position, Corto instinctively supports the disadvantaged and oppressed.

The character embodies the author's skepticism of national, ideological and religious assertions. Corto befriends people from all walks of life, including the murderous Russian Rasputin (no relation with the historical figure, apart from physical resemblance and some character traits), British heir Tristan Bantam, voodoo priestess Gold Mouth and Czech academic Jeremiah Steiner. He also knows and meets various real-life historical figures, including Jack London, Ernest Hemingway, Hermann Hesse, Butch Cassidy, James Joyce, Gabriele D'Annunzio, Frederick Rolfe, Joseph Conrad, Sükhbaatar, John Reed, White Russian general Roman von Ungern-Sternberg, Enver Pasha of Turkey and Sergei Semenov, modelled after Grigory Semyonov. His acquaintances treat him with great respect, as when a telephone call to Joseph Stalin frees him from arrest when he is threatened with execution on the border of Turkey and Armenia.

Corto's favourite book is Utopia by Thomas More, but he never finishes it. He also read books by London, Lugones, Stevenson, Melville and Conrad, and quotes Rimbaud.

Corto Maltese stories range from straight historical adventure to occult dream sequences. He is present when the Red Baron is shot down, helps the Jívaro in South America, and flees Fascists in Venice, but also unwittingly helps Merlin and Oberon to defend Britain and helps Tristan Bantam to visit the lost continent of Mu.

Chronologically, the first adventure, Corto Maltese: The Early Years, happens during the Russo-Japanese War. In other albums he experiences the Great War in several locations, participates in the Russian Civil War after the October Revolution, and appears during the early stages of Fascist Italy. In a separate series by Pratt, The Desert Scorpions, Corto is said to be missing in action in Spain during the Spanish Civil War.

This is a list of the twelve original Corto Maltese novels in chronological order. French editions were published by Casterman, Italian by Edizioni Lizard, English editions by IDW's EuroComics imprint.

In 2015 the series was continued by Ruben Pellejero and Juan Díaz Canales, with the following albums published thus far:

In 2021 a reboot series was launched by Martin Quenehen and Bastien Vivès reimagining the character for the 21st Century.