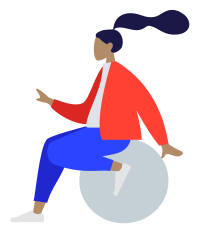 Corporate Memphis is a term used (often disparagingly) to describe a flat, geometric art style, widely used in Big Tech illustrations in the late 2010s [1] and early 2020s. [2] It is often criticized as seeming uninspired or dystopian. [1]

Corporate Memphis is considered to be rooted in a style which has been dubbed flat art — a broad category of illustrative styles characterized by flat shapes and exaggerated proportions. [2] However, the inception of Corporate Memphis as its own style is often attributed to Alegria, an illustration system commissioned by Facebook from design agency Buck Studios in 2017. [3] [4]

The style's title, which has been colloquially assigned, is a reference to the Memphis Group, an Italian architecture group from the 1980s known for its designs that are often thought to be garish. [2] It is also known as the Alegria style, [1] Globohomo [5] or Big Tech art style. [6] Illustrators working in this style often refer to it as flat art. [2] 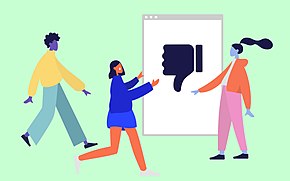 Common motifs are flat human characters in action, with disproportionate features such as long and bendy limbs, [2] small torsos, [7] minimal or no facial features, and bright colors without any blending. Skin tones are often depicted in a non-representational manner, with colors such as blues and purples being employed in order to create a sense of inclusivity. [8]

The style has been criticized for being generic, [9] overused, and attempting to sanitize public perception by presenting human interaction in utopian optimism. [1] Criticism of the art style is often rooted in critiques of capitalism and neoliberalism. [7] Some argue that the ubiquity of the art style has facilitated a form of cultural homogenization. [10] Others have observed that in its visual branding, Corporate Memphis "makes big tech companies look friendly, approachable, and concerned with human-level interaction and community– which is largely the opposite of what they really are," and that its visual minimalism reflects artistic laziness. [2]