From Wikipedia
https://en.wikipedia.org/wiki/Contiguous_United_States
48 states of the United States apart from Alaska and Hawaii

A map showing the contiguous United States and, in insets at the lower left, the two states that are not contiguous

The contiguous United States or officially the conterminous United States, [1] also known as the Lower 48, [1] consists of the 48 adjoining U.S. states and the District of Columbia on the continent of North America. [2] The terms exclude the non-contiguous states of Alaska and Hawaii and all other offshore insular areas, such as American Samoa, Guam, the Northern Mariana Islands, Puerto Rico, and the U.S. Virgin Islands. [3] [4] These differ from the related term continental United States, which includes Alaska (also on the North American continent but separated from the 48 states by British Columbia and Yukon of Canada) but excludes the Hawaiian Islands and all U.S. territories in the Caribbean and the Pacific. [1] [5]

The contiguous United States would be placed fifth on the list of countries and dependencies by area. The total area of the country, including Alaska and Hawaii, ranks third or fourth. In land area only, the country ranks fourth, ahead of Brazil and Australia, but behind Russia, Canada and China. [9] Brazil is 431,000 square kilometers (166,000 sq mi) larger than the contiguous United States, but smaller than the entire United States, while Russia, Canada, and maybe China are the only countries larger than both. The 2020 census population of this area was 328,571,074, comprising 99.13% of the nation's population, and a density of 111.04 inhabitants/sq mi (42.872/km2), compared to 93.844/sq mi (36.233/km2) for the nation as a whole. [10]

While conterminous U.S. has the precise meaning of contiguous U.S. (both adjectives meaning "sharing a common boundary"), other terms commonly used to describe the 48 contiguous states have a greater degree of ambiguity.

Because Alaska is also a part of North America, the term continental United States also includes that state, so the term is qualified with the explicit inclusion of Alaska to resolve any ambiguity. [3] [11] [12] [13] On May 14, 1959, the United States Board on Geographic Names issued the following definitions based partially on the reference in the Alaska Omnibus Bill, which defined the continental United States as "the 49 States on the North American Continent and the District of Columbia..." The Board reaffirmed these definitions on May 13, 1999. [14] However, even before Alaska became a state, it was properly included within the continental U.S. due to being an incorporated territory. [15]

The term mainland United States is sometimes used synonymously with continental United States, but technically refers only to those parts of states connected to the landmass of North America, thereby excluding not only Hawaii and overseas insular areas, but also islands which are part of continental states but separated from the mainland, such as the Aleutian Islands ( Alaska), San Juan Islands ( Washington), the Channel Islands ( California), the Keys ( Florida), the barrier islands ( Gulf and East Coast states), and Long Island (New York). [16]

"CONUS" redirects here. For the sea snail, see Conus. For people with the surname "Conus", and other uses, see Conus (disambiguation).

CONUS, a technical term used by the U.S. Department of Defense, General Services Administration, NOAA/National Weather Service, and others, has been defined both as the continental United States, and as the 48 contiguous states. [17] [18] The District of Columbia is not always specifically mentioned as being part of CONUS. [18]

OCONUS is derived from CONUS with O for outside added, thus referring to Outside of Continental United States (OCONUS). [17] [19]

Zone of the Interior

During World War II, the first four numbered Air Forces of the United States Army Air Forces (USAAF) were said to be assigned to the Zone of the Interior by the American military organizations of the time—the future states of Alaska and Hawaii, then each only organized incorporated territories of the Union, were respectively covered by the Eleventh Air Force and Seventh Air Force during the war.[ citation needed]

Residents of Alaska, Hawaii and off-shore U.S. territories have unique labels for the contiguous United States because of their own locations relative to them. 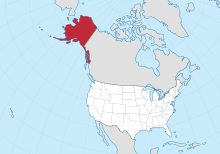 Alaska became the 49th state of the United States on January 3, 1959. Alaska is on the northwest end of the North American continent, but separated from the rest of the United States West Coast by the Canadian province of British Columbia. The term Lower 48 has, for many years, been a common Alaskan equivalent for "contiguous United States"; [22] [23] today, many Alaskans use the term "Outside", though a few persons may use "Outside" to refer to any location not within Alaska. [24]

Hawaii (consisting of nearly all the Hawaiian Islands) became the 50th state of the United States on August 21, 1959. It is the southernmost and so far, the latest state to join the Union. Not part of any continent, Hawaii is located in the Pacific Ocean, about 2,200 miles (3,541 km) from North America and almost halfway to Asia. In Hawaii and overseas American territories, for instance, the terms the Mainland or U.S. Mainland are often used to refer to the 49 states in North America. [25] [26]

Puerto Rico is an unincorporated territory of the United States located in the northeast Caribbean Sea, approximately 1,000 miles (1,609 km) southeast of Miami, Florida. Puerto Ricans born in Puerto Rico are U.S. citizens and are free to move to the mainland United States. The term Stateside Puerto Rican refers to residents of a U.S. state or the District of Columbia, who were born in or trace family ancestry to Puerto Rico. [27]

American Samoa is a U.S. territory located in the South Pacific Ocean in Polynesia, south of the equator — it is 2,200 miles (3,500 km) southwest of Hawaii. [30] In American Samoa, the contiguous United States is called the "mainland United States" or "the states"; those not from American Samoa are called palagi (outsiders). [31]

Apart from off-shore U.S. islands, a few continental portions of the contiguous U.S. are accessible by road only by traveling through Canada. Point Roberts, Washington; Elm Point, Minnesota; and the Northwest Angle in Minnesota are three such places. Alburgh, Vermont, is not directly connected by land, but is accessible by road via bridges from within Vermont and from New York. [32] By contrast, Hyder, Alaska is physically part of contiguous Alaska and its easternmost town, but the only practical access is by road through Canada or by seaplane.

The 48 contiguous states are:

In addition, the District of Columbia is within the contiguous United States.