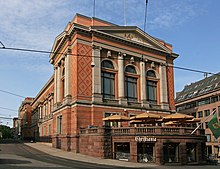 The Conservative Press Association ( Norwegian: Den Konservative Presses Forening; shortened DKPF) was a Norwegian media institution whose stated objective was the furtherance of conservative daily newspapers. Amongst its members were editors, journalists, publishers and businesspeople who were involved in declared conservative newspapers. [1] The activity in the association faded out concurrently with the discontinuance of party newspapers in Norway.

Christian Friele was honorary member of the association, despite not attending any of its meetings.

The Conservative Press Association was established on 29 August 1892 in the headquarters of the Norwegian Order of Freemasons, with Nils Vogt and Amandus Schibsted as initiators. [2] It was not the first press association in Norway; the Norwegian Journalist Association had erstwhile been established on 24 January 1883. [3] Vogt was elected the first chairman, and served in this position until 1906, apart from an interruption from 1898 to 1906. [4] The editor of Morgenbladet, Christian Friele, was an honorary member of the association, despite not attending any of its meetings. [5] In 1894, the Liberal Press Association ( Norwegian: Venstres Presseforening) was established. Despite their irreconcilable political positions, the two press associations cooperated extensively; in 1899 they issued a leaflet on Norway's political position in the dissolution of the personal union with Sweden in 1905. [2]

In the 1930s, it was called for a unification of the conservative newspapers in the country. [9] Rolv Werner Erichsen, an ardent conservative, established an office for the administration of the Conservative Party's newspapers in 1935. [10] It was located in the editorial office of the Morgenbladet newspaper and distributed news material to newspapers that subscribed to the office's deliveries. [9] In the late 1930s, the association remained sceptical towards fascism and nazism, and argued against creating affinities between the conservative newspapers, Nasjonal Samling and the Fatherland League. It also opposed proposals to encroach free speech. [11]

The editor Johs. Nesse of Aftenposten summoned the first meeting in the association after the war, on 19 October 1945. Chief editor Harald Torp was elected chairman, despite not attending the meeting. The association experienced increasing number of members after the war; in 1945 it had 55, whilst it in the following year had 65 members. [12] The efforts to unite the conservative press were resumed after the war; in 1945 the joint body Norsk Høyrepresse ("Norwegian Conservative Press") was established, comprising DKPF and Høyres Bladeierforening ("The Conservative Party's Newspaper Owner Association"). The joint body organised the merger of Høirepressens Propaganda- og Organisasjonskontor and Høirepressens Oslokontor; together they formed Høires Pressekontor, which eventually was renamed Høyres Pressebyrå. [13] [14]