Computer programming is the process of performing a particular computation (or more generally, accomplishing a specific computing result), usually by designing and building an executable computer program. Programming involves tasks such as analysis, generating algorithms, profiling algorithms' accuracy and resource consumption, and the implementation of algorithms (usually in a chosen programming language, commonly referred to as coding). [1] [2] The source code of a program is written in one or more languages that are intelligible to programmers, rather than machine code, which is directly executed by the central processing unit. The purpose of programming is to find a sequence of instructions that will automate the performance of a task (which can be as complex as an operating system) on a computer, often for solving a given problem. Proficient programming thus usually requires expertise in several different subjects, including knowledge of the application domain, specialized algorithms, and formal logic.

Tasks accompanying and related to programming include testing, debugging, source code maintenance, implementation of build systems, and management of derived artifacts, such as the machine code of computer programs. These might be considered part of the programming process, but often the term software development is used for this larger process with the term programming, implementation, or coding reserved for the actual writing of code. Software engineering combines engineering techniques with software development practices. Reverse engineering is a related process used by designers, analysts, and programmers to understand an existing program and re-implement its function. [3] 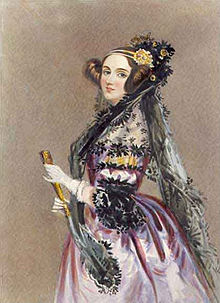 Programmable devices have existed for centuries. As early as the 9th century, a programmable music sequencer was invented by the Persian Banu Musa brothers, who described an automated mechanical flute player in the Book of Ingenious Devices. [4] [5] In 1206, the Arab engineer Al-Jazari invented a programmable drum machine where a musical mechanical automaton could be made to play different rhythms and drum patterns, via pegs and cams. [6] [7] In 1801, the Jacquard loom could produce entirely different weaves by changing the "program" – a series of pasteboard cards with holes punched in them.

The first computer program is generally dated to 1843, when mathematician Ada Lovelace published an algorithm to calculate a sequence of Bernoulli numbers, intended to be carried out by Charles Babbage's Analytical Engine. [9]

Data and instructions were once stored on external punched cards, which were kept in order and arranged in program decks.

In the 1880s Herman Hollerith invented the concept of storing data in machine-readable form. [10] Later a control panel (plug board) added to his 1906 Type I Tabulator allowed it to be programmed for different jobs, and by the late 1940s, unit record equipment such as the IBM 602 and IBM 604, were programmed by control panels in a similar way, as were the first electronic computers. However, with the concept of the stored-program computer introduced in 1949, both programs and data were stored and manipulated in the same way in computer memory. [11] 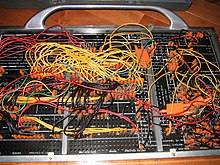 Wired control panel for an IBM 402 Accounting Machine. Wires connect pulse streams from the card reader to counters and other internal logic and ultimately to the printer.

High-level languages made the process of developing a program simpler and more understandable, and less bound to the underlying hardware. The first compiler related tool, the A-0 System, was developed in 1952 [12] by Grace Hopper, who also coined the term 'compiler'. [13] [14] FORTRAN, the first widely used high-level language to have a functional implementation, came out in 1957, [15] and many other languages were soon developed—in particular, COBOL aimed at commercial data processing, and Lisp for computer research.

These compiled languages allow the programmer to write programs in terms that are syntactically richer, and more capable of abstracting the code, making it easy to target for varying machine instruction sets via compilation declarations and heuristics. Compilers harnessed the power of computers to make programming easier [15] by allowing programmers to specify calculations by entering a formula using infix notation.

Programs were mostly entered using punched cards or paper tape. By the late 1960s, data storage devices and computer terminals became inexpensive enough that programs could be created by typing directly into the computers. Text editors were also developed that allowed changes and corrections to be made much more easily than with punched cards.

Whatever the approach to development may be, the final program must satisfy some fundamental properties. The following properties are among the most important: [16] [17]

In computer programming, readability refers to the ease with which a human reader can comprehend the purpose, control flow, and operation of source code. It affects the aspects of quality above, including portability, usability and most importantly maintainability.

Readability is important because programmers spend the majority of their time reading, trying to understand, reusing and modifying existing source code, rather than writing new source code. Unreadable code often leads to bugs, inefficiencies, and duplicated code. A study found that a few simple readability transformations made code shorter and drastically reduced the time to understand it. [19]

The presentation aspects of this (such as indents, line breaks, color highlighting, and so on) are often handled by the source code editor, but the content aspects reflect the programmer's talent and skills.

Various visual programming languages have also been developed with the intent to resolve readability concerns by adopting non-traditional approaches to code structure and display. Integrated development environments (IDEs) aim to integrate all such help. Techniques like Code refactoring can enhance readability.

The academic field and the engineering practice of computer programming are both largely concerned with discovering and implementing the most efficient algorithms for a given class of problems. For this purpose, algorithms are classified into orders using so-called Big O notation, which expresses resource use, such as execution time or memory consumption, in terms of the size of an input. Expert programmers are familiar with a variety of well-established algorithms and their respective complexities and use this knowledge to choose algorithms that are best suited to the circumstances.

Popular modeling techniques include Object-Oriented Analysis and Design ( OOAD) and Model-Driven Architecture ( MDA). The Unified Modeling Language ( UML) is a notation used for both the OOAD and MDA.

Some languages are very popular for particular kinds of applications, while some languages are regularly used to write many different kinds of applications. For example, COBOL is still strong in corporate data centers [22] often on large mainframe computers, Fortran in engineering applications, scripting languages in Web development, and C in embedded software. Many applications use a mix of several languages in their construction and use. New languages are generally designed around the syntax of a prior language with new functionality added, (for example C++ adds object-orientation to C, and Java adds memory management and bytecode to C++, but as a result, loses efficiency and the ability for low-level manipulation). 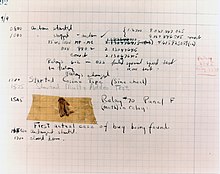 The first known actual bug causing a problem in a computer was a moth, trapped inside a Harvard mainframe, recorded in a log book entry dated September 9, 1947. [23] "Bug" was already a common term for a software defect when this insect was found.

Debugging is a very important task in the software development process since having defects in a program can have significant consequences for its users. Some languages are more prone to some kinds of faults because their specification does not require compilers to perform as much checking as other languages. Use of a static code analysis tool can help detect some possible problems. Normally the first step in debugging is to attempt to reproduce the problem. This can be a non-trivial task, for example as with parallel processes or some unusual software bugs. Also, specific user environment and usage history can make it difficult to reproduce the problem.

After the bug is reproduced, the input of the program may need to be simplified to make it easier to debug. For example, when a bug in a compiler can make it crash when parsing some large source file, a simplification of the test case that results in only few lines from the original source file can be sufficient to reproduce the same crash. Trial-and-error/divide-and-conquer is needed: the programmer will try to remove some parts of the original test case and check if the problem still exists. When debugging the problem in a GUI, the programmer can try to skip some user interaction from the original problem description and check if remaining actions are sufficient for bugs to appear. Scripting and breakpointing is also part of this process.

Debugging is often done with IDEs. Standalone debuggers like GDB are also used, and these often provide less of a visual environment, usually using a command line. Some text editors such as Emacs allow GDB to be invoked through them, to provide a visual environment.

Different programming languages support different styles of programming (called programming paradigms). The choice of language used is subject to many considerations, such as company policy, suitability to task, availability of third-party packages, or individual preference. Ideally, the programming language best suited for the task at hand will be selected. Trade-offs from this ideal involve finding enough programmers who know the language to build a team, the availability of compilers for that language, and the efficiency with which programs written in a given language execute. Languages form an approximate spectrum from "low-level" to "high-level"; "low-level" languages are typically more machine-oriented and faster to execute, whereas "high-level" languages are more abstract and easier to use but execute less quickly. It is usually easier to code in "high-level" languages than in "low-level" ones. Programming languages are essential for software development. They are the building blocks for all software, from the simplest applications to the most sophisticated ones.

Allen Downey, in his book How To Think Like A Computer Scientist, writes:

The details look different in different languages, but a few basic instructions appear in just about every language:

Many computer languages provide a mechanism to call functions provided by shared libraries. Provided the functions in a library follow the appropriate run-time conventions (e.g., method of passing arguments), then these functions may be written in any other language.

Computer programmers are those who write computer software. Their jobs usually involve:

Although programming has been presented in the media as a somewhat mathematical subject, some research shows that good programmers have strong skills in natural human languages, and that learning to code is similar to learning a foreign language. [24][ better source needed]

Wikibooks has a book on the topic of: Computer Programming

Wikibooks has a book on the topic of: Windows Programming