From Wikipedia
https://en.wikipedia.org/wiki/Compound_interest
Compounding sum paid for the use of money 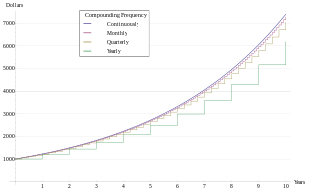 The effect of earning 20% annual interest on an initial $1,000 investment at various compounding frequencies

The compounding frequency is the number of times per year (or rarely, another unit of time) the accumulated interest is paid out, or capitalized (credited to the account), on a regular basis. The frequency could be yearly, half-yearly, quarterly, monthly, weekly, daily, or continuously (or not at all, until maturity).

For example, monthly capitalization with interest expressed as an annual rate means that the compounding frequency is 12, with time periods measured in months.

The effect of compounding depends on:

There are usually two aspects to the rules defining these rates: 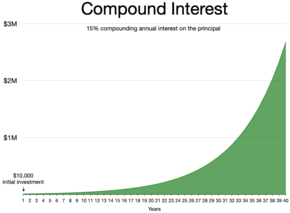 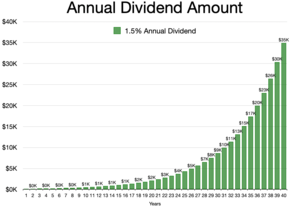 Annual dividend of 1.5% on initial $10,000 investment
$266,864 in total dividend payments over 40 years
Dividends were not reinvested in this scenario

The total accumulated value, including the principal sum

The total compound interest generated is the final value minus the initial principal: [4]

Subtracting the original principal from this amount gives the amount of interest received:

The amount of interest received can be calculated by subtracting the principal from this amount.

The interest is less compared with the previous case, as a result of the lower compounding frequency.

Accumulation functions for simple and compound interest are

, then these two functions are the same.

As n, the number of compounding periods per year, increases without limit, the case is known as continuous compounding, in which case the effective annual rate approaches an upper limit of er − 1, where e is a mathematical constant that is the base of the natural logarithm.

As the number of compounding periods

In mathematics, the accumulation functions are often expressed in terms of e, the base of the natural logarithm. This facilitates the use of calculus to manipulate interest formulae.

For any continuously differentiable accumulation function a(t), the force of interest, or more generally the logarithmic or continuously compounded return is a function of time defined as follows:

This is the logarithmic derivative of the accumulation function.

; this can be viewed as a particular case of a product integral.)

When the above formula is written in differential equation format, then the force of interest is simply the coefficient of amount of change:

A way of modeling the force of inflation is with Stoodley's formula:

where p, r and s are estimated.

When interest is continuously compounded, use

The interest on loans and mortgages that are amortized—that is, have a smooth monthly payment until the loan has been paid off—is often compounded monthly. The formula for payments is found from the following argument.

An exact formula for the monthly payment (

This can be derived by considering how much is left to be repaid after each month.
The Principal remaining after the first month is

that is, the initial amount plus interest less the payment.
If the whole loan is repaid after one month then

After the second month

If the whole loan was repaid after two months,

This equation generalises for a term of n months,

. This is a geometric series which has the sum

which can be rearranged to give

In spreadsheets, the PMT() function is used. The syntax is:

A formula that is accurate to within a few percent can be found by noting that for typical U.S. note rates (

which yields a simplification so that

installments. In terms of these variables the approximation can be written

implying that it can be expanded in even powers of

It follows immediately that

can be expanded in even powers of

plus the single term:

It will prove convenient then to define

which can be expanded:

is valid to better than 1% provided

The exact payment amount is

so the approximation is an overestimate of about a sixth of a percent.

Given an principal (initial) deposit and a recurring deposit, the total return of an investment can be calculated via the compound interest gained per unit of time. If required, the interest on additional non-recurring and recurring deposits can also be defined within the same formula (see below). [5]

The compound interest for each deposit is:

If two or more types of deposits occur (either recurring or non-recurring), the compound value earned can be represented as

where C is each lump sum and k are non-monthly recurring deposits, respectively, and x and y are the differences in time between a new deposit and the total period t is modeling.

A practical estimate for reverse calculation of the rate of return when the exact date and amount of each recurring deposit is not known, a formula that assumes a uniform recurring monthly deposit over the period, is: [6]

Compound interest when charged by lenders was once regarded as the worst kind of usury and was severely condemned by Roman law and the common laws of many other countries. [7]

The Florentine merchant Francesco Balducci Pegolotti provided a table of compound interest in his book Pratica della mercatura of about 1340. It gives the interest on 100 lire, for rates from 1% to 8%, for up to 20 years. [8] The Summa de arithmetica of Luca Pacioli (1494) gives the Rule of 72, stating that to find the number of years for an investment at compound interest to double, one should divide the interest rate into 72.

Richard Witt's book Arithmeticall Questions, published in 1613, was a landmark in the history of compound interest. It was wholly devoted to the subject (previously called anatocism), whereas previous writers had usually treated compound interest briefly in just one chapter in a mathematical textbook. Witt's book gave tables based on 10% (the then maximum rate of interest allowable on loans) and on other rates for different purposes, such as the valuation of property leases. Witt was a London mathematical practitioner and his book is notable for its clarity of expression, depth of insight and accuracy of calculation, with 124 worked examples. [9] [10]

in 1683 by studying a question about compound interest.

In the 19th century, and possibly earlier, Persian merchants used a slightly modified linear Taylor approximation to the monthly payment formula that could be computed easily in their heads. [11]

Look up interest in Wiktionary, the free dictionary.