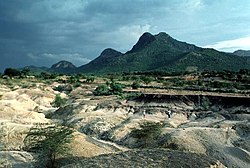 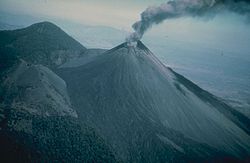 An eruption of Pacaya, Guatemala in 1976 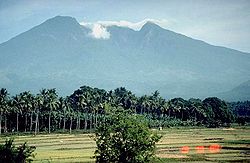 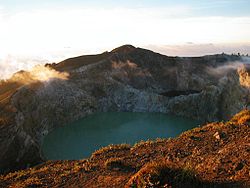 A complex volcano, also called a compound volcano or a volcanic complex, is a mixed landform consisting of related volcanic centers and their associated lava flows and pyroclastic rock. [1] They may form due to changes in eruptive habit or in the location of the principal vent area on a particular volcano. [2] Stratovolcanoes can also form a large caldera that gets filled in by a lava dome, or else multiple small cinder cones, lava domes and craters may develop on the caldera's rim. [2] [3]

Although a comparatively unusual type of volcano, they are widespread in the world and in geologic history. Metamorphosed ash flow tuffs are widespread in the Precambrian rocks of northern New Mexico, which indicates that caldera complexes have been important for much of Earth's history. Yellowstone National Park is on three partly covered caldera complexes. The Long Valley Caldera in eastern California is also a complex volcano; the San Juan Mountains in southwestern Colorado are formed on a group of Neogene-age caldera complexes, and most of the Mesozoic and Cenozoic rocks of Nevada, Idaho, and eastern California are also caldera complexes and their erupted ash flow tuffs. The Bennett Lake Caldera in British Columbia and the Yukon Territory is another example of a Cenozoic ( Eocene) caldera complex.