A graph of the common logarithm of numbers from 0.1 to 100

In mathematics, the common logarithm is the logarithm with base 10. [1] It is also known as the decadic logarithm and as the decimal logarithm, named after its base, or Briggsian logarithm, after Henry Briggs, an English mathematician who pioneered its use, as well as standard logarithm. Historically, it was known as logarithmus decimalis [2] or logarithmus decadis. [3] It is indicated by log(x), [4] log10 (x), [5] or sometimes Log(x) with a capital L (however, this notation is ambiguous, since it can also mean the complex natural logarithmic multi-valued function). On calculators, it is printed as "log", but mathematicians usually mean natural logarithm (logarithm with base e ≈ 2.71828) rather than common logarithm when they write "log". To mitigate this ambiguity, the ISO 80000 specification recommends that log10 (x) should be written lg(x), and loge (x) should be ln(x). 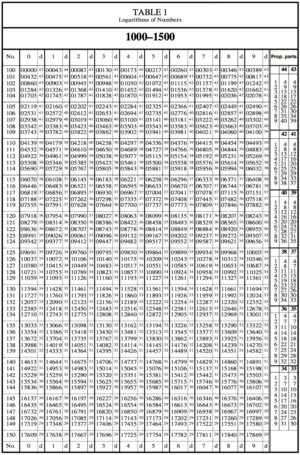 Page from a table of common logarithms. This page shows the logarithms for numbers from 1000 to 1500 to five decimal places. The complete table covers values up to 9999.

Before the early 1970s, handheld electronic calculators were not available, and mechanical calculators capable of multiplication were bulky, expensive and not widely available. Instead, tables of base-10 logarithms were used in science, engineering and navigation—when calculations required greater accuracy than could be achieved with a slide rule. By turning multiplication and division to addition and subtraction, use of logarithms avoided laborious and error-prone paper-and-pencil multiplications and divisions. [1] Because logarithms were so useful, tables of base-10 logarithms were given in appendices of many textbooks. Mathematical and navigation handbooks included tables of the logarithms of trigonometric functions as well. [6] For the history of such tables, see log table.

An important property of base-10 logarithms, which makes them so useful in calculations, is that the logarithm of numbers greater than 1 that differ by a factor of a power of 10 all have the same fractional part. The fractional part is known as the mantissa. [note 1] Thus, log tables need only show the fractional part. Tables of common logarithms typically listed the mantissa, to four or five decimal places or more, of each number in a range, e.g. 1000 to 9999.

The integer part, called the characteristic, can be computed by simply counting how many places the decimal point must be moved, so that it is just to the right of the first significant digit. For example, the logarithm of 120 is given by the following calculation:

Positive numbers less than 1 have negative logarithms. For example,

The bar over the characteristic indicates that it is negative, while the mantissa remains positive. When reading a number in bar notation out loud, the symbol

is read as "bar 2 point 07918…". An alternative convention is to express the logarithm modulo 10, in which case

* This step makes the mantissa between 0 and 1, so that its antilog (10mantissa) can be looked up.

The following table shows how the same mantissa can be used for a range of numbers differing by powers of ten:

Note that the mantissa is common to all of the 5  ×  10i. This holds for any positive real number

Since i is a constant, the mantissa comes from

, which is constant for given

Common logarithms are sometimes also called "Briggsian logarithms" after Henry Briggs, a 17th century British mathematician. In 1616 and 1617, Briggs visited John Napier at Edinburgh, the inventor of what are now called natural (base-e) logarithms, in order to suggest a change to Napier's logarithms. During these conferences, the alteration proposed by Briggs was agreed upon; and after his return from his second visit, he published the first chiliad of his logarithms.

Because base-10 logarithms were most useful for computations, engineers generally simply wrote "log(x)" when they meant log10 (x). Mathematicians, on the other hand, wrote "log(x)" when they meant loge (x) for the natural logarithm. Today, both notations are found. Since hand-held electronic calculators are designed by engineers rather than mathematicians, it became customary that they follow engineers' notation. So the notation, according to which one writes "ln(x)" when the natural logarithm is intended, may have been further popularized by the very invention that made the use of "common logarithms" far less common, electronic calculators. 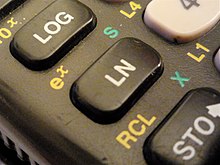 The logarithm keys (log for base-10 and ln for base-e) on a typical scientific calculator. The advent of hand-held calculators largely eliminated the use of common logarithms as an aid to computation.

The numerical value for logarithm to the base 10 can be calculated with the following identities: [5]

using logarithms of any available base

as procedures exist for determining the numerical value for logarithm base e (see Natural logarithm § Efficient computation) and logarithm base 2 (see Algorithms for computing binary logarithms).