Common Era (CE) and Before the Common Era (BCE) are year notations for the Gregorian calendar (and its predecessor, the Julian calendar), the world's most widely used calendar era. Common Era and Before the Common Era are alternatives to the Anno Domini (AD and BC) notations used by Dionysius Exiguus. The two notation systems are numerically equivalent: "2022 CE" and "AD 2022" each describe the current year; "400 BCE" and "400 BC" are the same year. [1] [2]

The expression traces back to 1615, when it first appeared in a book by Johannes Kepler as the Latin: annus aerae nostrae vulgaris (year of our common era), [3] [4] and to 1635 in English as " Vulgar Era". [a] The term "Common Era" can be found in English as early as 1708, [5] and became more widely used in the mid-19th century by Jewish religious scholars. Since the later 20th century, CE and BCE are popular in academic and scientific publications as religiously neutral terms. [6] [7] They are used by others who wish to be sensitive to non-Christians by not explicitly referring to Jesus as " Christ" nor as Dominus ("Lord") through use of the other abbreviations. [8] [9] [b] [c]

The year numbering system used with Common Era notation was devised by the Christian monk Dionysius Exiguus in the year 525 to replace the Era of Martyrs system, because he did not wish to continue the memory of a tyrant who persecuted Christians. [11] He numbered years from an initial reference date (" epoch"), an event he referred to as the Incarnation of Jesus. [11] [12] [13] Dionysius labeled the column of the table in which he introduced the new era as "Anni Domini Nostri Jesu Christi". [14]

This way of numbering years became more widespread in Europe with its use by Bede in England in 731. Bede also introduced the practice of dating years before what he supposed was the year of birth of Jesus, [15] and the practice of not using a year zero. [d] In 1422, Portugal became the last Western European country to switch to the system begun by Dionysius. [16] 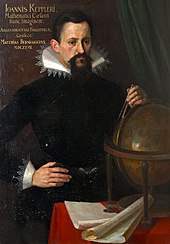 The term "Common Era" is traced back in English to its appearance as " Vulgar Era" to distinguish dates on the Ecclesiastic calendar in popular use from dates of the regnal year, the year of the reign of a sovereign, typically used in national law. (The word 'vulgar' originally meant 'of the ordinary people', with no derogatory associations.)

The English phrase "common Era" appears at least as early as 1708, [5] and in a 1715 book on astronomy it is used interchangeably with "Christian Era" and "Vulgar Era". [27] A 1759 history book uses common æra in a generic sense, to refer to the common era of the Jews. [28] The first use found so far of the phrase "before the common era" is in a 1770 work that also uses common era and vulgar era as synonyms, in a translation of a book originally written in German. [29] The 1797 edition of the Encyclopædia Britannica uses the terms vulgar era and common era synonymously. [30] In 1835, in his book Living Oracles, Alexander Campbell, wrote: "The vulgar Era, or Anno Domini; the fourth year of Jesus Christ, the first of which was but eight days", [31] and also refers to the common era as a synonym for vulgar era with "the fact that our Lord was born on the 4th year before the vulgar era, called Anno Domini, thus making (for example) the 42d year from his birth to correspond with the 38th of the common era". [32] The Catholic Encyclopedia (1909) in at least one article reports all three terms (Christian, Vulgar, Common Era) being commonly understood by the early 20th century. [33]

An adapted translation of Common Era into Latin as Era Vulgaris (era – or, with a macron, ēra – being an alternative form of aera; aera is the usual form [42]) was adopted in the 20th century by some followers of Aleister Crowley, and thus the abbreviation "e.v." or "EV" may sometimes be seen as a replacement for AD. [43]

History of the use of the CE/BCE abbreviation

Although Jews have their own Hebrew calendar, they often use the Gregorian calendar, without the AD prefix. [44] As early as 1825, the abbreviation VE (for Vulgar Era) was in use among Jews to denote years in the Western calendar. [45] As of 2005, Common Era notation has also been in use for Hebrew lessons for more than a century. [46] In 1856, Rabbi and historian Morris Jacob Raphall used the abbreviations CE and BCE in his book Post-Biblical History of The Jews. [47] [f] Jews have also used the term Current Era. [49]

Some academics in the fields of theology, education, archaeology and history have adopted CE and BCE notation despite some disagreement. [50] Several style guides now prefer or mandate its use. [51]

In 2002, an advisory panel for the religious education syllabus for England and Wales recommended introducing BCE/CE dates to schools, [52] and by 2018 some local education authorities were using them. [53] In 2018, the National Trust said it would continue to use BC/AD as its house style. [53] English Heritage explains its era policy thus: "It might seem strange to use a Christian calendar system when referring to British prehistory, but the BC/AD labels are widely used and understood." [54] Some parts of the BBC use BCE/CE, but some presenters have said they will not. [53] As of October 2019, the BBC News style guide has entries for AD and BC, but not for CE or BCE. [55]

The style guide for The Guardian says, under the entry for CE/BCE: "some people prefer CE (common era, current era, or Christian era) and BCE (before common era, etc) to AD and BC, which, however, remain our style". [56]

In the United States, the use of the BCE/CE notation in textbooks was reported in 2005 to be growing. [46] Some publications have transitioned to using it exclusively. For example, the 2007 World Almanac was the first edition to switch to BCE/CE, ending a period of 138 years in which the traditional BC/AD dating notation was used. BCE/CE is used by the College Board in its history tests, [57] and by the Norton Anthology of English Literature. Others have taken a different approach. The US-based History Channel uses BCE/CE notation in articles on non-Christian religious topics such as Jerusalem and Judaism. [58] The 2006 style guide for the Episcopal Diocese Maryland Church News says that BCE and CE should be used. [59]

In June 2006, in the United States, the Kentucky State School Board reversed its decision to use BCE and CE in the state's new Program of Studies, leaving education of students about these concepts a matter of local discretion. [60] [61] [62]

In 2011, media reports suggested that the BC/AD notation in Australian school textbooks would be replaced by BCE/CE notation. [63] The change drew opposition from some politicians and church leaders. Weeks after the story broke, the Australian Curriculum, Assessment and Reporting Authority denied the rumour and stated that the BC/AD notation would remain, with CE and BCE as an optional suggested learning activity. [64]

The use of CE in Jewish scholarship was historically motivated by the desire to avoid the implicit "Our Lord" in the abbreviation AD. Although other aspects of dating systems are based in Christian origins, AD is a direct reference to Jesus as Lord. [66] [67]

Proponents of the Common Era notation assert that the use of BCE/CE shows sensitivity to those who use the same year numbering system as the one that originated with and is currently used by Christians, but who are not themselves Christian. [68]

[T]he Christian calendar no longer belongs exclusively to Christians. People of all faiths have taken to using it simply as a matter of convenience. There is so much interaction between people of different faiths and cultures – different civilizations, if you like – that some shared way of reckoning time is a necessity. And so the Christian Era has become the Common Era. [70]

Adena K. Berkowitz, in her application to argue before the United States Supreme Court, opted to use BCE and CE because "Given the multicultural society that we live in, the traditional Jewish designations – B.C.E. and C.E. – cast a wider net of inclusion". [71]

Christian, non-Christian, and non-religious individuals who oppose the usage of Common Era often note the fact that there is no difference in the origin of two systems. BCE and CE are still based on BC and AD and denote the periods before and after Jesus was born. [72]

Some oppose the Common Era notation for explicitly religious reasons, because the BC/AD tradition is based on the presumptive year of the conception or birth of Jesus. Some Christians are offended by the removal of the reference to him in era notation. [73] The Southern Baptist Convention supports retaining the BC/AD abbreviations. [74]

Roman Catholic priest and writer on interfaith issues Raimon Panikkar argued that the BCE/CE usage is the less inclusive option, since in his view they are still using the Christian calendar, forcing it on other nations. [75]

In 1993, the English-language expert Kenneth G. Wilson speculated a slippery slope scenario in his style guide that "if we do end by casting aside the AD/BC convention, almost certainly some will argue that we ought to cast aside as well the conventional numbering system [that is, the method of numbering years] itself, given its Christian basis." [76] The short-lived French Republican Calendar, for example, began with the first year of the French First Republic and rejected the seven-day week (with its connections to the Book of Genesis) for a ten-day week.[ citation needed]

The abbreviation BCE, just as with BC, always follows the year number. Unlike AD, which still often precedes the year number, CE always follows the year number (if context requires that it be written at all). [76] Thus, the current year is written as 2022 in both notations (or, if further clarity is needed, as 2022 CE, or as AD 2022), and the year that Socrates died is represented as 399 BCE (the same year that is represented by 399 BC in the BC/AD notation). The abbreviations are sometimes written with small capital letters, or with periods (e.g., "B.C.E." or "C.E."). [77] The US-based Society of Biblical Literature style guide for academic texts on religion prefers BCE/CE to BC/AD. [78]

Similar conventions in other languages