From Wikipedia
https://en.wikipedia.org/wiki/Comb_(anatomy)
Crest on the top of the head of some gallinaceous birds
For other uses, see Coxcomb. 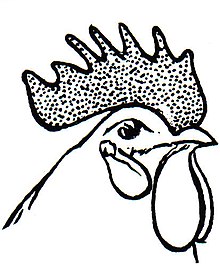 A comb is a fleshy growth or crest on the top of the head of gallinaceous birds, such as turkeys, pheasants, and domestic chickens. Its alternative name cockscomb (with several spelling variations) reflects that combs are generally larger on males than on females (a male gallinaceous bird is called a cock). There can be several fleshy protuberances on the heads and throats of gallinaceous birds, i.e. the comb, wattle, and earlobe, which collectively are called caruncles, however, in turkeys caruncle refers specifically to the fleshy nodules on the head and throat.

Chicken combs are most commonly red (but may be black or dark purple in breeds such as Silkies or Sebrights), but in other species the color may vary from light grey to deep blue or red; [1] turkey combs can vary in color from bright red to blue.

The comb may be a reliable indicator of health or vigor and is used for mate-assessment in some poultry species. [2]

Comb shape varies considerably depending on the breed or species of bird. The "comb" most often refers to chickens in which the most common shape is the "single comb" of a rooster from breeds such as the Leghorn. Other common comb types are the "rose comb" (e.g. the Rosecomb) or "pea comb" (e.g. the Brahma or the Araucana). Other distinctive shapes have been selectively bred for, such as the "buttercup comb" of the Sicilian Buttercup, "V combs" (popularly called "devil horn") in the Houdan and other breeds, the "cushion comb" of the Chantecler, and "walnut comb" of Malay game. [3]

Combs are used in cookery, often in combination with wattles or chicken kidneys.

Combs were formerly used in French cuisine as garnishes. They were also used to prepare salpicons served in vol-au-vents, profiteroles, etc. in which they were often combined with other luxury ingredients such as truffles, sweetbreads, or morels in a cream sauce.

In Italian cuisine, combs are an important ingredient in the famous sauce called Cibreo, which also includes chicken livers, wattles, and unlaid eggs. It is used as a sauce for tagliatelle and in the molded potato-ricotta ring Cimabella con cibreo. [4]

Combs are prepared by parboiling and skinning, then cooking in court-bouillon. After preparation, they are greyish.

Because of its bright color and distinctive shape, "cockscomb" also describes various plants, including the florists' plant Celosia cristata, the meadow weed yellow rattle, sainfoin, wild poppy, lousewort, Erythronium and Erythrina crista-galli; the characteristic jester's cap; a shape of pasta (creste di galli); and so on.

In Puerto Rico, prior to the abolishment of chicken fights, the comb would often be removed prior to a cockfight, this was to prevent rival rooster from pulling and ripping it off during a match.