From Wikipedia, the free encyclopedia
Values ascribed to colors in Chinese cultural tradition 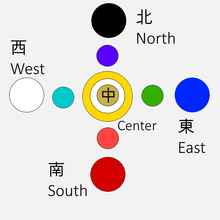 Chinese culture attaches certain values to colors, like which colors are considered auspicious (吉利) or inauspicious (不利). The Chinese word for "color" is yánsè (顏色). In Classical Chinese, the character sè (色) more accurately meant "color in the face", or "emotion". It was generally used alone and often implied sexual desire or desirability. During the Tang Dynasty, the word yánsè came to mean all color. A Chinese idiom which is used to describe many colors, Wǔyánliùsè (五顏六色), can also mean colors in general.

In traditional Chinese art and culture, black, red, qing (青) ( a conflation of the idea of green and blue), white and yellow are viewed as standard colors. These colors correspond to the five elements ( 五行) of water, fire, wood, metal and earth, taught in traditional Chinese physics. Throughout the Shang, Tang, Zhou and Qin dynasties, China's emperors used the Theory of the Five Elements to select colors. Other colours were considered by Confucius as 'inferior'. [1] 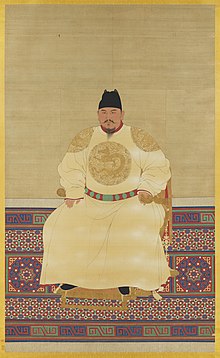 Yellow of a golden hue, corresponding with earth, is considered the most beautiful and prestigious color. [2] The Chinese saying Yellow generates Yin and Yang implies that yellow is the center of everything. Associated with but ranked above brown, yellow signifies neutrality and good luck. Yellow is sometimes paired with red in place of gold.

The Yellow River is the cradle of Chinese civilisation. Yellow was the emperor's color in Imperial China and is held as the symbolic color of the five legendary emperors of ancient China, such as the Yellow Emperor. The Yellow Dragon is the zoomorphic incarnation of the Yellow Emperor of the centre of the universe in Chinese religion and mythology. The Flag of the Qing dynasty featured golden yellow as the background. The Plain Yellow Banner and the Bordered Yellow Banner were two of the upper three banners of Later Jin and Qing dynasty.

Yellow often decorates royal palaces, altars and temples, and the color was used in the dragon robes and attire of the emperors. [2] It was a rare honour to receive the imperial yellow jacket.

Yellow also represents freedom from worldly cares and is thus esteemed in Buddhism. Monks' garments are yellow, as are elements of Buddhist temples. Yellow is also used as a mourning color for Chinese Buddhists.

Yellow is also symbolic of heroism, as opposed to the Western association of the color with cowardice. [3] 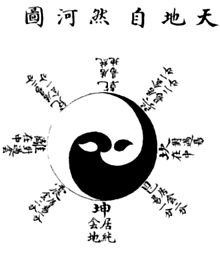 18th-century representation of the Taijitu of Zhao Huiqian (1370s)

Black, corresponding to water, is a neutral color. The I Ching, or Book of Changes, regards black as Heaven's color. The saying "heaven and earth of black" was rooted in the observation that the northern sky was black for a long time. They believed Tian Di, or Heavenly Emperor, resided in the North Star.

The Taiji symbol uses black and white to represent the unity of yin and yang. Ancient Chinese people regarded black as the king of colors and honored black more consistently than any other color. Lao Zi said know the white, keep the black and the Dao school believes black is the color of the Dao.

In modern China, black is used in daily clothing. Black, along with white, is associated with death and mourning and was formerly worn at funerals, but depends on the age of passing.

White is also the color of mourning. It is associated with death and is used predominantly in funerals in Chinese culture. [3] Ancient Chinese people wore white clothes and hats only when they mourned for the dead.

Red is found everywhere during Chinese New Year and other holiday celebrations and family gatherings. In addition to the new year, red has been used in Chinese weddings since ancient times, which can represent the traditional Chinese wedding color.

A red envelope is a monetary gift which is given in Chinese society during holiday or special occasions. The red color of the packet symbolizes good luck. Red is strictly forbidden at funerals as it is a traditionally symbolic color of happiness; [4] however, as the names of the dead were previously written in red, it may be considered offensive to use red ink for Chinese names in contexts other than official seals.

In modern China, red remains a very popular color and is affiliated with and used by the Chinese government.

Generally blue or azure and green is associated with health, prosperity, and harmony. The old term is qing. Azure was used for the roof tiles of the Temple of Heaven as well as its ornate interior and a number of other structures to represent heaven. It is also the color of jade as well as celadon that was developed to imitate it.

The five intermediary colors (五間色 wǔjiànsè) are formed as combinations of the five elemental colors. These are: [6]