This CockcroftŌĆōWalton particle accelerator was used during the development of the atomic bomb. Built in 1937 by Philips of Eindhoven it is now in the National Science Museum in London, England.

750 kV Cockcroft-Walton accelerator used as the initial particle injector of the Japanese KEK accelerator, Tsukuba, Japan. The CW generator is on the right, the particle source is on the left.

The CockcroftŌĆōWalton (CW) generator, or multiplier, is an electric circuit that generates a high DC voltage from a low-voltage AC or pulsing DC input. It was named after the British and Irish physicists John Douglas Cockcroft and Ernest Thomas Sinton Walton, who in 1932 used this circuit design to power their particle accelerator, performing the first artificial nuclear disintegration in history. [1] They used this voltage multiplier cascade for most of their research, which in 1951 won them the Nobel Prize in Physics for " Transmutation of atomic nuclei by artificially accelerated atomic particles". The circuit was discovered in 1919, by Heinrich Greinacher, a Swiss physicist. For this reason, this doubler cascade is sometimes also referred to as the Greinacher multiplier. CockcroftŌĆōWalton circuits are still used in particle accelerators. They also are used in everyday electronic devices that require high voltages, such as X-ray machines, microwave ovens and photocopiers.

The CW generator is a voltage multiplier that converts AC or pulsing DC electrical power from a low voltage level to a higher DC voltage level. It is made up of a voltage multiplier ladder network of capacitors and diodes to generate high voltages. Unlike transformers, this method eliminates the requirement for the heavy core and the bulk of insulation/potting required. Using only capacitors and diodes, these voltage multipliers can step up relatively low voltages to extremely high values, while at the same time being far lighter and cheaper than transformers. The biggest advantage of such circuits is that the voltage across each stage of the cascade is equal to only twice the peak input voltage in a half-wave rectifier. In a full-wave rectifier it is three times the input voltage. It has the advantage of requiring relatively low-cost components and being easy to insulate. One can also tap the output from any stage, like in a multitapped transformer.

To understand the circuit operation, see the diagram of the two-stage version at right. Assume the circuit is powered by an alternating voltage Vi with a peak value of Vp, and initially the capacitors are uncharged. After the input voltage is turned on

With each change in input polarity, current flows up the "stack" of capacitors through the diodes, until they are all charged. All the capacitors are charged to a voltage of 2Vp, except for C1, which is charged to Vp. The key to the voltage multiplication is that while the capacitors are charged in parallel, they are connected to the load in series. Since C2 and C4 are in series between the output and ground, the total output voltage (under no-load conditions) is Vo = 4Vp.

The number of stages is equal to the number of capacitors in series between the output and ground.

One way to look at the circuit is that it functions as a charge "pump", pumping electric charge in one direction, up the stack of capacitors. The CW circuit, along with other similar capacitor circuits, is often called charge pump. For substantial loads, the charge on the capacitors is partially depleted, and the output voltage drops according to the output current divided by the capacitance.

In practice, the CW has a number of drawbacks. As the number of stages is increased, the voltages of the higher stages begin to "sag", primarily due to the electrical impedance of the capacitors in the lower stages. And, when supplying an output current, the voltage ripple rapidly increases as the number of stages is increased (this can be corrected with an output filter, but it requires a stack of capacitors in order to withstand the high voltages involved). For these reasons, CW multipliers with large number of stages are used only where relatively low output current is required. The sag can be reduced by increasing the capacitance in the lower stages, and the ripple can be reduced by increasing the frequency of the input and by using a square waveform. By driving the CW from a high-frequency source, such as an inverter, or a combination of an inverter and HV transformer, the overall physical size and weight of the CW power supply can be substantially reduced.

3 MV CW accelerator at Kaiser Wilhelm Institute, Berlin in 1937, said to be the most powerful CW at the time (the two 4-stage ladders produced opposite polarity). Note the three human figures at top center for scale. 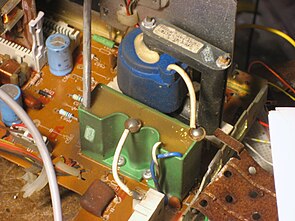