From Wikipedia, the free encyclopedia
Mountain range in Canada and the United States
This article is about the mountain ranges of the west coast of North America. For other uses, see Coast Range.

The Coast Mountains ( French: La chaîne Côtière) are a major mountain range in the Pacific Coast Ranges of western North America, extending from southwestern Yukon through the Alaska Panhandle and virtually all of the Coast of British Columbia south to the Fraser River. [1] The mountain range's name derives from its proximity to the sea coast, and it is often referred to as the Coast Range. [2] The range includes volcanic and non-volcanic mountains and the extensive ice fields of the Pacific and Boundary Ranges, and the northern end of the volcanic system known as the Cascade Volcanoes. The Coast Mountains are part of a larger mountain system called the Pacific Coast Ranges or the Pacific Mountain System, which includes the Cascade Range, the Insular Mountains, the Olympic Mountains, the Oregon Coast Range, the California Coast Ranges, the Saint Elias Mountains and the Chugach Mountains. The Coast Mountains are also part of the American Cordillera—a Spanish term for an extensive chain of mountain ranges—that consists of an almost continuous sequence of mountain ranges that form the western backbone of North America, Central America, South America and Antarctica.

The Coast Mountains are approximately 1,600 kilometres (1,000 mi) long and average 300 kilometres (190 mi) in width. [2] The range's southern and southeastern boundaries are surrounded by the Fraser River and the Interior Plateau while its far northwestern edge is delimited by the Kelsall and Tatshenshini Rivers at the north end of the Alaska Panhandle, beyond which are the Saint Elias Mountains, and by Champagne Pass in the Yukon Territory. [3] [4] Covered in dense temperate rainforest on its western exposures, the range rises to heavily glaciated peaks, including the largest temperate-latitude ice fields in the world. On its eastern flanks, the range tapers to the dry Interior Plateau and the subarctic boreal forests of the Skeena Mountains and Stikine Plateau.

The Coast Mountains are part of the Pacific Ring of Fire—the ring of volcanoes and associated mountains around the Pacific Ocean—and contain some of British Columbia's highest mountains. Mount Waddington is the highest mountain of the Coast Mountains and the highest that lies entirely within British Columbia, located northeast of the head of Knight Inlet with an elevation of 4,019 metres (13,186 ft). [5]

Just north of the Pacific Ranges lies the central subdivision known as the Kitimat Ranges. This subdivision extends from the Bella Coola River and Burke Channel in the south to the Nass River in the north.

The third and northernmost subdivision of the Coast Mountains is the Boundary Ranges, extending from the Nass River in the south to the Kelsall River in the north. It is also the largest subdivision of the Coast Mountains, spanning the British Columbia-Alaska border and northwards into Yukon flanking the west side of the Yukon River drainage as far as Champagne Pass, north of which being the Yukon Ranges. The Boundary Ranges include several large icefields, including the Juneau Icefield between Juneau, Alaska and Atlin Lake in British Columbia, and the Stikine Icecap, which lies between the lower Stikine River and the Whiting River.

Because the Coast Mountains are just east of the Pacific Ocean, they have a profound effect on British Columbia's climate by forcing moisture-laden air off the Pacific Ocean to rise, dropping heavy rainfalls on the western slopes where lush forests exist. [2] This precipitation is among the heaviest in North America. [2] The eastern slopes are relatively dry and less steep and protect the British Columbia Interior from the Pacific weather systems, resulting in dry warm summers and dry cold winters. [2]

The Coast Mountains consists of deformed igneous and metamorphosed structurally complex pre- Tertiary rocks. These originated in diverse locations around the globe: the area is built of several different terranes of different ages with a broad range of tectonic origins. In addition, oceanic crust under the Pacific Ocean is being subducted at the southern portion of the range to form a north–south line of volcanoes called the Garibaldi Volcanic Belt, a northern extension of the Cascade Volcanoes in the northwestern United States, and contains the most explosive young volcanoes in Canada. Further north the northwesterly structural trend of the Coast Mountains lies partly in a large continental rift responsible for the creation of several volcanoes. These volcanoes form part of the Northern Cordilleran Volcanic Province, the most volcanically active area in Canada.

One of the major aspects that changed early during the Coast Range Arc was the status of the northern end of the Farallon Plate, a portion now known as the Kula Plate. [6] About 85 million years ago, the Kula Plate broke off from the Farallon Plate to form a mid-ocean ridge known to geoscientists as the Kula-Farallon Ridge. [6] This change apparently had some important ramifications for regional geologic evolution. When this change was completed, Coast Range Arc volcanism returned and sections of the arc were uplifted considerably in latest Cretaceous time. [8] This started a period of mountain building that affected much of western North America called the Laramide orogeny. [9] In particular a large area of dextral transpression and southwest-directed thrust faulting was active from 75 to 66 million years ago. [8] Much of the record of this deformation has been overridden by Tertiary age structures and the zone of Cretaceous dextral thrust faulting appears to have been widespread. [8] It was also during this period when massive amounts of molten granite intruded highly deformed ocean rocks and assorted fragments from pre-existing island arcs, largely remnants of the Bridge River Ocean. [6] This molten granite burned the old oceanic sediments into a glittering medium-grade metamorphic rock called schist. [6] The older intrusions of the Coast Range Arc were then deformed under the heat and pressure of later intrusions, turning them into layered metamorphic rock known as gneiss. [6] In some places, mixtures of older intrusive rocks and the original oceanic rocks have been distorted and warped under intense heat, weight and stress to create unusual swirled patterns known as migmatite, appearing to have been nearly melted in the procedure. [6]

Volcanism began to decline along the length of the arc about 60 million years ago during the Albian and Aptian faunal stages of the Cretaceous period. [7] This resulted from the changing geometry of the Kula Plate, which progressively developed a more northerly movement along the Pacific Northwest. [6] Instead of subducting beneath the Pacific Northwest, the Kula Plate began subducting underneath southwestern Yukon and Alaska and during the early Eocene period. [6] Volcanism along the entire length of the Coast Range Arc shut down about 50 million years ago and many of the volcanoes have disappeared from erosion. [6] What remains of the Coast Range Arc to this day are outcrops of granite when magma intruded and cooled at depth beneath the volcanoes, forming the present Coast Mountains. [6] During construction of intrusions 70 and 57 million years ago, the northern motion of the Kula Plate might have been between 140 mm (6 in) and 110 mm (4 in) per year. [10] However, other geologic studies determined the Kula Plate moved at a rate as fast as 200 mm (8 in) per year. [10] 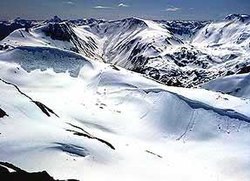