Clinton is a city in and the county seat of Anderson County, Tennessee, United States. [6] Clinton is included in the Knoxville metropolitan area. Its population was 10,056 at the 2020 census.

Prehistoric Native American habitation was not uncommon throughout the Clinch valley, especially during the Woodland period (1000 B.C. – 1000 A.D.) and the Mississippian period (1000–1550 A.D.). A number of such habitation sites were excavated in the 1930s and 1950s in anticipation of the construction of Norris Dam and Melton Hill Dam, respectively. The Melton Hill excavations uncovered two substantial Woodland period villages along the Clinch at Bull Bluff and Freels Bend, both approximately 20 miles (32 km) downstream from Clinton. [7]

By the time Euro-American explorers and long hunters arrived in the Clinch valley in the mid-18th century, what is now Anderson County was part of a vast stretch of land claimed by the Cherokee. [8] Although the Treaty of Holston, signed in 1791, was intended as a negotiation with the Cherokee to prohibit Euro-American settlement of the area including what is today Anderson County, the treaty became ineffective as more settlers moved through the Appalachian Mountains from Virginia and North Carolina into Tennessee. The earliest settlers in Anderson County included the Wallace, Gibbs, Freels, Frost and Tunnell families. The flooding of white settlers into the Indian domain was cause for several skirmishes, which eased after the Treaty of Tellico in 1798 (including an origination point for the land to be relinquished from the Cherokee being the Tellico Blockhouse) allowed for greater ease in settling the area. [9]

Founded in 1801, the town of Burrville was named in honor of Aaron Burr, first-term Vice President under Thomas Jefferson. Land was selected and partitioned for a courthouse, and Burrville was designated as the county seat for the newly formed Anderson County. The county was partitioned from portions of Grainger County and Knox County in 1801; neighboring Roane County was also formed from a portion of Knox County in 1801, making Anderson and Roane counties effectively "sister counties". [10]

On November 8, 1809, by act of Tennessee State Legislature, the town of Burrville was renamed because of the disgrace felt when Burr was charged with treason for conspiring with the governor of the Louisiana Purchase, to form another country from part of the Louisiana Purchase and part of Mexico. The selection of the name "Clinton" was most likely to honor George Clinton or his nephew, DeWitt Clinton. [11] George Clinton was one of Burr's New York political rivals who, along with Alexander Hamilton, destroyed Burr's bid for the governorship of the state of New York after his single-term vice presidency. George Clinton succeeded Burr as the second-term vice president for Thomas Jefferson in 1805 (and also served as James Madison's vice president, making Clinton the first vice president to serve under two presidents and the first vice president to die in office). Because of the political position of George Clinton as vice president at the time of Burrville's name change, compared to DeWitt Clinton's position as the mayor of New York City, most likely the residents of the town of Burrville would have been more readily identifiable and more honorable toward George Clinton than DeWitt; therefore, it is most likely Clinton was named after George Clinton, barring historical proof.

The Clinton Engineer Works, named after Clinton, was the official name for the Manhattan Project site in Tennessee which produced the enriched uranium used in the 1945 bombing of Hiroshima, as well as the first examples of reactor-produced plutonium. The site was also known by the name of its largest township, Oak Ridge. The works were located starting about 3 miles (4.8 km) southwest of Clinton, continued for 10 miles (16 km) towards Kingston and contained roughly 58,900 acres (23,800 ha).

In 1956, Clinton gained national attention when segregationists opposed the desegregation of Clinton High School. Following the U.S. Supreme Court decision in the case of Brown v. Board of Education, a court order required the desegregation of the high school. Twelve African-American students enrolled in the high school in the fall of 1956. On August 27, 1956, the Clinton Twelve attended classes at Clinton High School for the first time, becoming the first African-Americans to desegregate a state-supported public school in the Southeast. While the first day of classes occurred without incident, pro-segregation forces led by John Kasper and Asa Carter arrived in Clinton the following week and rallied the city's white citizens. Riots broke out in early September, forcing Governor Frank G. Clement to station National Guard units in Clinton throughout September. Sporadic violence and threats continued for the next two years, culminating in the bombing of Clinton High School on October 5, 1958. With an influx of outside aid, however, the school was quickly rebuilt. [12]

In the 1990s, the Rogers Group, a firm specializing in road paving, began a campaign to reactivate an abandoned quarry and build an asphalt plant just east of Clinton near the community of Bethel. The initiative met with opposition from local and environmental groups, who were concerned that the plant would release cancer-causing toxins into nearby residential neighborhoods. Others were concerned about plummeting property values, noise pollution, damage from rock blasting, and environmental damage to Buffalo Creek. The company argued that it would follow stringent environmental and pollution guidelines, retention ponds would limit runoff, and that the site would be surrounded by vegetation. Nevertheless, Anderson County refused to rezone the quarry property for industrial uses, and Rogers Group sued the county in 1995. [13] [14]

In December 2006, after Rogers Group's lawsuit had stagnated, the city of Clinton voted to annex the quarry property. [13] On August 20, 2007, the Clinton City Council voted 6–1 to rezone the quarry property for industrial uses, paving the way for the plant's construction. In response, a local advocacy group known as Citizens for Safety and Clean Air filed a lawsuit on behalf of several Bethel residents in Anderson County Chancery Court contending that the council's rezoning was unconstitutional and seeking an injunction preventing the council from rezoning the property as an industrial zone. [15] 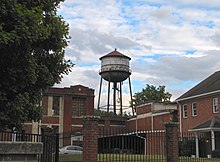 In 2018, urban developers and city officials met with the proposal to redevelop the downtown and waterfront area of Clinton after the Tennessee Department of Transportation began construction on a new bridge to carry US 25W- SR 9 across the Clinch River. [16] The highlight of the project is the 7-acre site of the former Magnet Mills complex, having 1,400 feet of Clinch River frontage. Proposed additions to the site include improved commercial development and pedestrian access in the downtown area, and a waterfront esplanade and multi-story mixed-use buildings with upper-level residential space and ground level retail and restaurant space. [16] Since 2018, an unknown developer based out of Knoxville has planned, under contract, the purchase of the Magnet Mills site along with a nearby plot of land with the intention of converting the area into a mix of residential and retail use. [17] The City of Clinton has also applied for grants towards the improvement of the streets and sidewalks in the city's downtown area. [17] In July 2019, the remaining structures of Magnet Mills site, excluding the water tower, were demolished as the developer closed the sale on mill site. [18] In early 2019, Aspire, a 450-acre multi-amenity park, was planned for development south of Clinton's downtown area. The park, proposed by the local non-profit organization, the Hollingsworth Foundation, which owns land for the site along with the Tennessee Valley Authority, plans for the park to give visitors access to hiking and mountain biking trails, event venues, kayak ports, and flower gardens. [19] In October 2019, construction work began on the site of the park. [20] 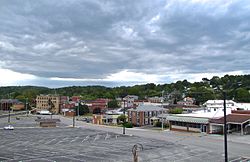 Clinton is surrounded by a series of long, narrow ridges that represent the western fringe of the Appalachian Ridge and Valley Province. Northwest of Clinton is Walden Ridge, the eastern escarpment of the Cumberland Plateau.

Clinton is concentrated around the junction of Tennessee State Route 61 and U.S. Route 25W. State Route 61 connects the city to Norris and Andersonville to the northeast and the community of Marlow and the town of Oliver Springs to the southwest, following a natural series of pathways through the mountain terrain. U.S. Route 25W connects the city to Knoxville to the southeast and Rocky Top and Caryville to the north. Interstate 75 intersects TN-61 northeast of downtown Clinton.

The climate in this area is characterized by relatively high temperatures and evenly distributed precipitation throughout the year. According to the Köppen Climate Classification system, Clinton has a Humid subtropical climate, abbreviated "Cfa" on climate maps. [23]

Clinton uses the council-manager government system, which was established in 1890 when the city was incorporated. Clinton is governed by a seven-member city council composed of the mayor and six council members. [26]

Clinton is represented in the Tennessee House of Representatives in the 33rd district by Representative John Ragan, a Republican. [27]

In the Tennessee State Senate, the city is represented by the 5th district by senator and Lieutenant Governor of Tennessee Randy McNally, also a Republican. [28]

Clinton is represented in the United States House of Representatives by Representative Chuck Fleischmann of the 3rd congressional district, a Republican. [29]