Cleveland Street in central London runs north to south from Euston Road ( A501) to the junction of Mortimer Street and Goodge Street. It lies within Fitzrovia, in the W1 post code area. Cleveland Street also runs along part of the border between Bloomsbury (ward) which is located in London Borough of Camden, and West End (ward) and Marylebone High Street (ward) in the City of Westminster. [1] In the 17th century, the way was known as the Green Lane, when the area was still rural, or Wrastling Lane, after a nearby amphitheatre for boxing and wrestling. [2] 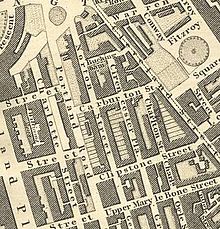 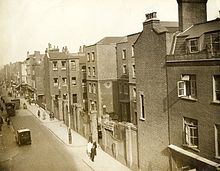 Cleveland Street marks the border between the City of Westminster to its west and the London Borough of Camden to the east. This border is ancient, largely following the old divide between the western parish of Saint Marylebone and the parish of Saint Pancras to the east and can be traced back as far as 1792. [4] The street was also a boundary between large estates, such as the Bedford Estate and the Berners Estate. [5] Maps show that the southern end of modern Cleveland Street, beyond Riding House Street, was known as Upper Newman Street and then Norfolk Street. The northern section was once known as Upper Cleveland Street and Buckingham Place. [6]

It became Cleveland Street for its full length after a renumbering was ordered by the Metropolitan Board of Works in 1867. [7]

The name comes from the Charles FitzRoy, 2nd Duke of Cleveland whose estate was connected in the 19th century with the Southampton (Wriothesley) property [8] via Henry Fitzroy, 1st Duke of Grafton. The Southampton property later became the Bedford Estate. Cleveland Street is renowned for several historical events and buildings, the most notable recent one being the BT Tower.

The Cleveland Street Scandal happened in 1889 at 19 Cleveland Street (now demolished) which at the time housed a male brothel in which teenage telegraph boys served as prostitutes. [9] The scandal was rumoured to involve Prince Albert Victor, Duke of Clarence and Avondale, an heir to the throne of Great Britain, though this allegation has never been substantiated. [10] A show inspired by the Cleveland Street scandal and titled Cleveland Street The Musical - with book and lyrics by Glenn Chandler - ran in London between April and May 2011.

In his book Jack the Ripper: The Final Solution, Stephen Knight mentions Cleveland Street in conjunction with two houses in the street. According to Knight's theory, the royal family was connected with the Jack The Ripper murders from 1888, via the same Prince Albert Victor who he claims met his later wife, Catholic prostitute Annie Elizabeth Crook, at the studio of the painter Walter Sickert at 15 Cleveland Street. After their secret wedding, Annie Elizabeth Crook was allegedly settled in a flat at 6 Cleveland Street. [11] The conspiracy theory behind the murders described in Knight's book has been loosely adapted into From Hell (1999), a graphic novel by Alan Moore from which a movie with the same title was adapted in 2001. Several scenes in the movie take place in Cleveland Street, although they were not shot on location. [12]

The Cleveland Street Workhouse [21] is of particular importance in light of the fact that Charles Dickens is known to have lived nearby in what is now 22 Cleveland Street. Dickens lived there as a young child between 1815–1816 and then again as a teenager between 1828 and 1831. His residence in the street has led to the suggestion that the nearby workhouse was probably the inspiration for Oliver Twist. [22] [23]

Cleveland Street hosted the Middlesex Hospital, closed in 2005 and since demolished. The hospital occupied an entire block on the western side of the southern section of the street. The future of this site is currently uncertain, despite its sale by nationalised Icelandic Kaupthing Bank to Aviva Investors and Exemplar Properties. [24]