Claustrophobia is the fear of confined spaces. It can be triggered by many situations or stimuli, including elevators, especially when crowded to capacity, windowless rooms, and hotel rooms with closed doors and sealed windows. Even bedrooms with a lock on the outside, small cars, and tight-necked clothing can induce a response in those with claustrophobia. It is typically classified as an anxiety disorder, which often results in panic attacks. The onset of claustrophobia has been attributed to many factors, including a reduction in the size of the amygdala and classical conditioning.

One study indicates that anywhere from 5-10% of the world population is affected by severe claustrophobia, but only a small percentage of these people receive some kind of treatment for the disorder.

The term claustrophobia comes from Latin claustrum "a shut in place" and Greek φόβος, phóbos, "fear".

Claustrophobia is classified as a mental and behavioral disorder, [1] specifically an anxiety disorder. Symptoms generally develop during childhood or adolescence. [2] Claustrophobia is typically thought to have one key symptom: fear of suffocation. In at least one, if not several, of the following areas: small rooms, MRI or CAT scan apparatus, cars, buses, airplanes, trains, tunnels, underwater caves, cellars, elevators and caves.

Being enclosed or thinking about being enclosed in a confined space can trigger fears of not being able to breathe properly, and running out of oxygen. It is not always the small space that triggers these emotions, but it's more the fear of the possibilities of what could happen while confined to that area. [2] When anxiety levels start to reach a certain ppo level, the person may start to experience:

The fear of enclosed spaces is an irrational fear. Most claustrophobic people who find themselves in a room without windows consciously know that they are not in danger, yet these same people will be afraid, possibly terrified to the point of incapacitation, and many do not know why.

The red structure is the amygdala.

In generating a fight-or-flight response, the amygdala acts in the following way: The amygdala's anterior nuclei associated with fear each other. Nuclei send out impulses to other nuclei, which influence respiratory rate, physical arousal, the release of adrenaline, blood pressure, heart rate, behavioral fear response, and defensive responses, which may include freezing up. These reactions constitute an 'autonomic failure' in a panic attack.

A study done by Fumi Hayano found that the right amygdala was smaller in patients who suffered from panic disorders. The reduction of size occurred in a structure known as the corticomedial nuclear group which the CE nucleus belongs to. This causes interference, which in turn causes abnormal reactions to aversive stimuli in those with panic disorders. In claustrophobic people, this translates as panicking or overreacting to a situation in which the person finds themselves physically confined.

Claustrophobia results as the mind comes to connect confinement with danger. It often comes as a consequence of a traumatic childhood experience, [3] although the onset can come at any point in an individual's life. Such an experience can occur multiple times, or only once, to make a permanent impression on the mind. [4] The majority of claustrophobic participants in an experiment done by Lars-Göran Öst reported that their phobia had been "acquired as a result of a conditioning experience. [5]" In most cases, claustrophobia seems to be the result of past experiences.

A few examples of common experiences that could result in the onset of claustrophobia in children (or adults) are as follows:

The term 'past experiences', according to one author, can extend to the moment of birth. In John A. Speyrer's "Claustrophobia and the Fear of Death and Dying", the reader is brought to the conclusion that claustrophobia's high frequency is due to birth trauma, about which he says is "one of the most horrendous experiences we can have during our lifetime", and it is in this helpless moment that the infant develops claustrophobia. [6] 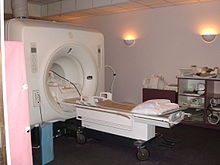 In an MRI, the patient is inserted into the tube.

Magnetic resonance imaging (MRI) can trigger claustrophobia. An MRI scan entails lying still for some time in a narrow tube. In a study involving claustrophobia and MRI, it was reported that 13% of patients experienced a panic attack during the procedure. The procedure has been linked not only to the triggering of 'preexisting' claustrophobia, but also to the onset of the condition in some people. [7] Panic attacks experienced during the procedure can stop the person from adjusting to the situation, thereby perpetuating the fear. [8]

The conditions inside a mine

S.J. Rachman tells of an extreme example, citing the experience of 21 miners. These miners were trapped underground for 14 days, during which six of the miners died of suffocation. After their rescue, ten of the miners were studied for ten years. All but one were greatly affected by the experience, and six developed phobias to "confining or limiting situations". The only miner who did not develop any noticeable symptoms was the one who acted as leader. [9]

Another factor that could cause the onset of claustrophobia is "information received. [5]" As Aureau Walding states in "Causes of Claustrophobia", many people, especially children, learn who and what to fear by watching parents or peers. This method does not only apply to observing a teacher, but also observing victims. Vicarious classical conditioning also includes when a person sees another person exposed directly to an especially unpleasant situation. [10] This would be analogous to observing someone getting stuck in a tight space, suffocated, or any of the other examples that were listed above.

There is research that suggests that claustrophobia isn't entirely a classically conditioned or learned phobia. It is not necessarily an inborn fear, but it is very likely what is called a prepared phobia. As Erin Gersley says in "Phobias: Causes and Treatments", humans are genetically predisposed to become afraid of things that are dangerous to them. Claustrophobia may fall under this category because of its "wide distribution… early onset and seeming easy acquisition, and its non-cognitive features. [11]" The acquisition of claustrophobia may be part of a vestigial evolutionary survival mechanism, [3] a dormant fear of entrapment and/or suffocation that was once important for the survival of humanity and could be easily awakened at any time. [12] Hostile environments in the past would have made this kind of pre-programmed fear necessary, and so the human mind developed the capacity for "efficient fear conditioning to certain classes of dangerous stimuli". [10]

Rachman provides an argument for this theory in his article: "Phobias". He agrees with the statement that phobias generally concern objects that constitute a direct threat to human survival, and that many of these phobias are quickly acquired because of an "inherited biological preparedness". [13] This brings about a prepared phobia, which is not quite innate, but is widely and easily learned. As Rachman explains in the article: "The main features of prepared phobias are that they are very easily acquired, selective, stable, biologically significant, and probably [non-cognitive]." 'Selective' and 'biologically significant' mean that they only relate to things that directly threaten the health, safety, or survival of an individual. 'Non-cognitive' suggests that these fears are acquired unconsciously. Both factors point to the theory that claustrophobia is a prepared phobia that is already pre-programmed into the mind of a human being.

Claustrophobia is the fear of being closed into a small space. It is typically classified as an anxiety disorder and often results in a rather severe panic attack. It is also confused sometimes with Cleithrophobia (the fear of being trapped). [14]

Diagnosis of claustrophobia usually transpires from a consultation about other anxiety-related conditions. Certain criteria have to be met to be diagnosed with specific phobias. This criteria includes: [2]

This method was developed in 1979 by interpreting the files of patients diagnosed with claustrophobia and by reading various scientific articles about the diagnosis of the disorder. Once an initial scale was developed, it was tested and sharpened by several experts in the field. Today, it consists of 20 questions that determine anxiety levels and desire to avoid certain situations. Several studies have proved this scale to be effective in claustrophobia diagnosis. [15]

This method was developed by Rachman and Taylor, two experts in the field, in 1993. This method is effective in distinguishing symptoms stemming from fear of suffocation. In 2001, it was modified from 36 to 24 items by another group of field experts. This study has also been proven very effective by various studies. [15]

Cognitive therapy is a widely accepted form of treatment for most anxiety disorders. [16] It is also thought to be particularly effective in combating disorders where the patient doesn't actually fear a situation but, rather, fears what could result from being in such a situation. [16] The ultimate goal of cognitive therapy is to modify distorted thoughts or misconceptions associated with whatever is being feared; the theory is that modifying these thoughts will decrease anxiety and avoidance of certain situations. [16] For example, cognitive therapy would attempt to convince a claustrophobic patient that elevators are not dangerous but are, in fact, very useful in getting you where you would like to go faster. A study conducted by S.J. Rachman shows that cognitive therapy decreased fear and negative thoughts/connotations by an average of around 30% in claustrophobic patients tested, proving it to be a reasonably effective method. [17]

This method forces patients to face their fears by complete exposure to whatever fear they are experiencing. [16] This is usually done in a progressive manner starting with lesser exposures and moving upward towards severe exposures. [16] For example, a claustrophobic patient would start by going into an elevator and work up to an MRI. Several studies have proven this to be an effective method in overcoming various phobias, claustrophobia included. [16] S.J. Rachman has also tested the effectiveness of this method in treating claustrophobia and found it to decrease fear and negative thoughts/connotations by an average of nearly 75% in his patients. [17] Of the methods he tested in this particular study, this was by far the most significant reduction. [17]

This method attempts to recreate internal physical sensations within a patient in a controlled environment and is a less intense version of in vivo exposure. [16] This was the final method of treatment tested by S.J. Rachman in his 1992 study. [17] It lowered fear and negative thoughts/connotations by about 25%. [17] These numbers did not quite match those of in vivo exposure or cognitive therapy, but still resulted in significant reductions. [17]

Other forms of treatment that have also been shown to be reasonably effective are psychoeducation, counter-conditioning, regressive hypnotherapy and breathing re-training. Medications often prescribed to help treat claustrophobia include antidepressants and beta blockers, which help to relieve the heart-pounding symptoms often associated with anxiety attacks.