Chestnut is a hair coat color of horses consisting of a reddish-to-brown coat with a mane and tail the same or lighter in color than the coat. Chestnut is characterized by the absolute absence of true black hairs. It is one of the most common horse coat colors, seen in almost every breed of horse.

Chestnut is a very common coat color but the wide range of shades can cause confusion. The lightest chestnuts may be mistaken for palominos, while the darkest shades can be so dark they appear black. Chestnuts have dark brown eyes and black skin, and typically are some shade of red or reddish brown. The mane, tail, and legs may be lighter or darker than the body coat, but unlike the bay they are never truly black. Like any other color of horse, chestnuts may have pink skin with white hair where there are white markings, and if such white markings include one or both eyes, the eyes may be blue. Chestnut foals may be born with pinkish skin, which darkens shortly afterwards. [1]

Chestnut is produced by a recessive gene. Unlike many coat colors, chestnut can be true-breeding; that is, assuming they carry no recessive modifiers like pearl or mushroom, the mating between two chestnuts will produce chestnut offspring every time. This can be seen in breeds such as the Suffolk Punch and Haflinger, which are exclusively chestnut. Other breeds including the Belgian and Budyonny are predominantly chestnut. However, a chestnut horse need not have two chestnut parents. This is especially apparent in breeds like the Friesian horse and Ariegeois pony which have been selected for many years to be uniformly black, but on rare occasions still produce chestnut foals. 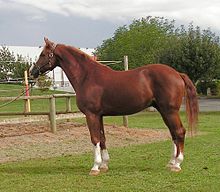 A chestnut horse with white markings.

Chestnuts can vary widely in shade and different terms are sometimes used to describe these shades, even though they are genetically indistinguishable. Collectively, these coat colors are usually called "red" by geneticists.

This light, flaxen, mealy chestnut Haflinger might be mistaken for a palomino

Chestnut is considered a "base color" in the discussion of equine coat color genetics. Additional coat colors based on chestnut are often described in terms of their relationship to chestnut: 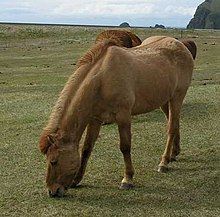 A red dun has a light reddish- tan body and dark red primitive markings and points.

Combinations of multiple dilution genes do not always have consistent names. For example, "dunalinos" are chestnuts with both the dun gene and one copy of the cream gene.

Bay horses have a red body but black " points"

The chestnut color, called "red" by geneticists, is created by an allele that is a mutation from the wildtype and is genetically the most recessive coat color that exists in modern horses. The gene for "red" color is designated as "e". This is because the presence or absence of red color in horses is determined by the equine melanocortin 1 receptor (MC1R), a protein positioned on chromosome 3 (ECA3) at the Extension locus. The wild type version of the gene encoding MC1R is the E allele (colloquially, though imprecisely, called the "Extension gene"), and is part of the genetic pathway that allows melanocytes to produce eumelanin, or black pigment. [5] When the "E" allele is not present, no eumelanin is produced, but the "e" allele still allows melanin to be produced in the form of pheomelanin, or red pigment, creating a chestnut or red-based coat color. In general, alleles that create fully functional MC1R proteins are inherited dominantly and result in a black-based coat color ("E"), while mutated alleles that create "dysfunctional" MC1R are recessive and result in a lighter coat color ("e").

Red hair color in horses ("e") is created by a missense mutation in the code for MC1R, which results in a protein that cannot bind to the Melanocyte-stimulating hormone (MSH), [6] which is released by the pituitary gland, [5] and stimulates the production and release of melanin in skin and hair. So long as one functional copy ("E") is present, the protein is formed normally and black pigment is produced. However, when only mutant copies ("e) of the gene are available, non-functional MC1R proteins are produced. As a result, no black pigment is deposited into the hair and the entire coat is red-based. However, the skin of chestnut horses is still generally black, unless affected by other genes. Some chestnut foals are also born with lighter eyes and lightened skin, which darken not long after birth. This is not the same as the blue eyes and pink skin seen at birth in foals carrying the champagne gene. It is a genetic mechanism not fully understood, but may be related to the pheomelanistic characteristics of "e".

A chestnut foal with body-clipped head and neck, showing two-toned hair shaft, lighter at the roots

The recessive nature of the chestnut or "red" coat in horses occurs because a single copy of the E allele is dominant over the e allele. Therefore, for example, bay and black horses may be heterozygous for e and if so, could produce a chestnut foal when bred to another horse with at least one copy of "e". However, all chestnut horses are homozygous for the "e" allele and thus breeding a chestnut to another chestnut will always produce a chestnut foal. Thus, unlike many coat colors, chestnut can be true-breeding; if any color other than chestnut occurs, then one of the parents was not chestnut.

Red can occur in horses that carry "E" when other genes influence its expression. In some cases, MC1R exists but is locally antagonized by the agouti signalling peptide (ASIP), or "agouti gene", which "suppresses" black color and allows some red pigment to be formed. This results in localized regions of black-rich or red-rich pigmentation, as seen in bay horses.