listen)) is a commune in the southwestern suburbs of Paris. It is located 10.8 km (6.7 mi) from the center of Paris.

The French writer Chateaubriand lived in the estate Vallée-aux-Loups at Châtenay-Malabry. The Garden City in the Butte Rouge, the Cité Jardins, is one of the earliest examples of housing at moderated rents ( HLM).

Châtenay is the location of École Centrale Paris, of the Faculty of Pharmacy of the University of Paris-Sud and of French national laboratory of doping detection. It is also the home of the Arboretum de la Vallée-aux-Loups. The high-speed LGV Atlantique crosses the city through a tunnel covered by a park called Coulée verte (greenway).

From 31 December 2002, it was part of the Agglomeration community of Hauts de Bièvre, which merged into the Métropole du Grand Paris in January 2016.

Châtenay-Malabry is situated near the Parc de Sceaux.

A highly wooded area, it can be crossed by the Coulée verte du sud parisien [ fr], which includes part of Via Turonesis which is one of the routes through France on the pilgrimage to the tomb of St. James the Great. As for the North and South entrances, they are, to say the least, a part of the urban fabric of the town.

The two main entrances to the town are located west and east of the Division Leclerc avenue, which is the main road of the town. In the direction of Verrières Forest is a large roundabout which appears as a clearing in the forest before diving into the urban landscape. In the direction of Antony is a simple roundabout located at the southeast corner of the Sceaux Park.

Originally simply called Châtenay, the name of the commune officially became Châtenay-Malabry in 1920.

House of Chateaubriand in the Vallée-aux-Loups estate 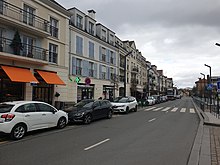 Châtenay-Malabry is twinned with