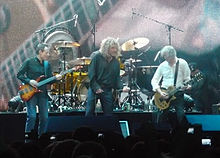 The surviving members of Led Zeppelin perform in 2007, from left to right: John Paul Jones, Robert Plant, and Jimmy Page 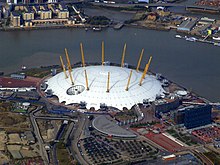 The O2 is the United Kingdom's second-largest arena 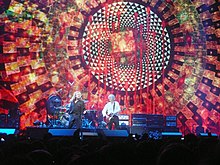 Celebration Day is a concert film and live album by the English rock band Led Zeppelin, recorded at the Ahmet Ertegun Tribute Concert on 10 December 2007, in The O2 Arena, London. The film was given a limited theatrical release starting on 17 October 2012, and was released on several home audio and video formats on 19 November 2012. The performance, the film, and album releases have been widely praised.

In 2007, a benefit concert to commemorate the life of music executive Ahmet Ertegun was staged with a reunited Led Zeppelin as the main act. They played many of their most famous songs to an enthusiastic crowd and coordinated a professional recording of the show [2] with 16 cameras, [3] with the prospect of a home video release. Rumours immediately circulated that the recording would become available, but the following year, band member Jimmy Page said that release wasn't certain and that it required mixing and would be a "massive job to embark on." [4] Bassist John Paul Jones agreed that he would like to see it released commercially, but that there was no timeline. [5] Even through 2010, Page was uncertain of the status of the album. [6] On 9 September 2012, the band updated its Facebook page, which led to widespread speculation that the release was finally ready. [7] Details leaked over the following days, with theatre web sites announcing airings of the film slated for the following month. [8]

On 13 September, the band revealed that the film would hit theatres on 17 October, with premieres in Berlin, London, Los Angeles, New York City, and Tokyo [9] and that the home video was scheduled for 19 November. [10] The surviving members of the band appeared at a press event on 21 September to promote the release. [11] They debuted the film at London's famed Hammersmith Apollo on October 12 (of 2012) and answered questions afterward; when queried about more reunion performances, the trio were coy. [12]

Like the 2007 greatest hits album Mothership, the cover and promotional art were designed by Shepard Fairey. Alan Moulder worked with Jimmy Page on mixing the album but used only a minimal amount of overdubs and corrections, as both the performance itself and the recording were of high quality. [13]

The album was released in a standard edition consisting of one DVD or Blu-ray bundled with two soundtrack CDs. A triple vinyl LP was initially announced to be released on 10 December 2012 but distribution started in the middle of February 2013. The deluxe edition includes bonus video from the Shepperton rehearsals and news footage from the BBC. Additionally, there is an audio-only Blu-ray with DTS-HD MA 24-bit/48 kHz sound and no video.

The concert performance was well received. NME published that the show "prove[d] that they can still perform to the level that originally earned them their legendary reputation." [14] Writing for The New Yorker, Sasha Frere-Jones opined, "the failed gigs of the nineteen-eighties and nineties have been supplanted by a triumph, and the band should be pleased to have done Ertegun proud with such a spirited performance." [15]

The film has also received acclaim from critics. Marc Lee of The Daily Telegraph gave it five out of five stars and concluded that "Celebration Day is a celebration of rock 'n' roll at its most moving, magical and magnificent." [16] The initial screening opened to over 1,500 screens in 40 countries and grossed over USD$2 million, [1] leading to further showings worldwide. [17] In 2013, it won a Classic Rock Roll of Honours Award for Film of the Year. [18]

In terms of sales, it debuted on the Billboard 200 at No. 9. [21] According to the International Federation of the Phonographic Industry (IFPI), Celebration Day was the 13th-best-selling album globally of 2012 with sales of 1.8 million copies. [22]