From Wikipedia
(Redirected from Byzantine technology)
https://en.wikipedia.org/wiki/Byzantine_technology
Inventions of the Byzantine empire heir of the Roman 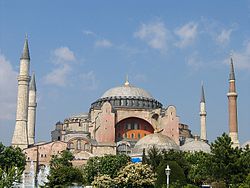 The characteristic multi-domed profile of the Byzantine Hagia Sophia, the first pendentive dome in history, has shaped Orthodox and Islamic architecture alike. [1]

This is a list of Byzantine inventions. The Byzantine or Eastern Roman Empire represented the continuation of the Roman Empire after a part of it collapsed. Its main characteristics were Roman state traditions, Greek culture and Christian faith. [2]

Greek fire, referred to by Byzantine chroniclers as "sea fire" or "liquid fire", [17] was primarily a naval weapon, used in ship-to-ship battle against enemy galleys. The exact composition was a well-guarded state secret, to the point that modern scholars continue to debate its ingredients, but the main method of projection is fairly clear, indicating effectively a flame-thrower: The liquid mixture, heated in a brazier and pressurized by means of a pump, was ejected by an operator through a siphon in any direction against the enemy. [18] Alternatively, it could be poured down from swivel cranes or hurled in pottery grenades. [19]
Greek fire held a fearsome reputation among Byzantium's numerous enemies who began to field – probably differently composed – combustibles of their own. [20] It was, however, no wonder weapon, but dependent on favourable conditions such as a calm sea and wind coming from behind. [21] When and how the use of Greek fire was discontinued is not exactly known. According to one theory, the Byzantines lost the secret due to over-compartmentalization long before the 1204 sack of Constantinople. [22]