Transformers: Animated is an American superhero animated television series based on the Transformers toy line. It was produced by Cartoon Network Studios and Hasbro Entertainment and animated by The Answer Studio, Mook Animation, and Studio 4°C (shorts). The series debuted on Cartoon Network on December 26, 2007, and ended on May 23, 2009; running for 42 episodes across three seasons. In Japan, the show debuted on April 3, 2010, on both TV Aichi and TV Tokyo. [5]

The show is set in its own stand-alone continuity, separate from any other previous Transformers continuities. Despite this, the series features many references to the other continuities; such as footage from the Generation 1 series being used as a historical film. [6]

The series began with a three-part movie-length episode called "Transform and Roll Out!". Stellar cycles (years) after the Autobots won the great war for Cybertron against the Decepticons, an Autobot maintenance crew led by Optimus Prime and consisting of Ratchet, Bulkhead, Prowl, and Bumblebee discover the legendary AllSpark buried on an asteroid. The Autobots take the AllSpark back to their ship, but are soon confronted by a crew of Decepticons led by the notorious warlord Megatron and consisting of Blitzwing, Lugnut, Blackarachnia, and Starscream. Megatron attacks the Autobot ship and tries to retrieve the AllSpark, but when an explosive planted on Megatron by the treacherous Starscream detonates, the ship crashes on Earth. The Autobots go into stasis to survive the crash, while the scattered remains of Megatron are discovered by a human scientist named Isaac Sumdac.

Half a century later, Professor Issac Sumdac is the CEO of a robotics company known as Sumdac Systems, which is based in a futuristic version of Detroit in the 2050s. Optimus Prime and the Autobots awaken from stasis and defend the people of Detroit from a monster, resulting in them becoming local celebrities. They befriend Professor Sumdac's young daughter Sari, who teaches them about Earth customs, and whose security card is transformed into a metallic toll which possesses a fraction of the AllSpark's vast cosmic power. Starscream arrives on Earth and tries to take the all-powerful AllSpark for himself, but the Autobots successfully stop him and save the Earth once again.

The Autobots settle into their new home and learn about Earth culture and customs, all of the while defending Detroit from various threats. Megatron's disembodied head, which has been in Professor Sumdac's laboratory since the ship crashed, comes back online and manipulates Sumdac into building him a new body, pretending that he is an Autobot. Blitzwing and Lugnut arrive on Earth searching for Megatron, while Blackarachnia targets Optimus Prime, blaming him for her techno-organic mutation. New Transformers introduced in the first season include the Autobot Arcee (who only appears in Ratchet's flashbacks), the Decepticon Soundwave, the bounty-hunter Lockdown, and the Dinobots Grimlock, Snarl, and Swoop. Several human villains are also introduced, including Nanosec (who can run at extreme speeds), the Headmaster (who pilots a machine that attaches to and controls large robots) and Meltdown (who is covered in a toxic and corrosive substance). The season ends with Megatron returning with a new body (built by the all-powerful AllSpark from his old body, while also killing Starscream for his betrayal), and the AllSpark exploding into many fragments that scatter across Detroit.

The Autobot Elite Guard members Ultra Magnus, Sentinel Prime, and Jazz arrive on Earth to retrieve the AllSpark, only to learn of its destruction in the Season One finale. While Sentinel completely disbelieves Optimus's claims, Optimus and his team are eventually able to convince Magnus of Decepticon activity on Earth. The main theme for Season Two is the discovery of small fragments of the AllSpark littered across the city (and possibly, the entire planet), while the Decepticons work on building a space bridge back to Cybertron with the help of Issac Sumdac, who was kidnapped by Megatron in the previous season's finale. This is part of Megatron's plan to invade Cybertron from within, without the Autobots' awareness.

New characters introduced in season 2 include the Autobots Omega Supreme (who was revealed to be Optimus Prime's team's spaceship), Wreck-Gar, Wasp and Blurr, the Decepticons Shockwave, Swindle, Mixmaster and Scrapper, the human villain Slo-Mo (who is able to slow down time using a watch embedded with an AllSpark fragment), and Starscream's army of clones Thundercracker, Ramjet, Skywarp, Sunstorm, and Slipstream (none of the clones are openly referred to by name in the series, the names listed come from the toy-line, while Slipstream was retroactively given her name by Hasbro). At the end of the season, the Decepticon Space Bridge is destroyed, but Megatron, Starscream (resurrected by the AllSpark fragment in his forehead), and Omega Supreme are sucked through and lost in deep space. Sari meanwhile, notices an injury that exposes mechanical components under her skin, revealing that she is not entirely human.

Sari is shocked and distraught over the revelation that she is a robot, and instantly assumes that her "father" had actually built her, refusing to believe Sumdac's claim that he discovered her as a small liquid metal body (protoform). Upon examining Sari, Ratchet discovers something quite jarring; Sari is essentially human, but also part Cybertronian. Prowl does some research and discovers that Professor Sumdac was in fact telling the truth, and deduces that Sari is a Cybertronian protoform (the early development stage of all Cybertronians) that came into contact with Sumdac's genetic information. Sari later uses the great power from her Key to upgrade herself into an armored techno-organic teenage form that is far taller and much stronger; (similar to Kamen Rider & Super Sentai/ Power Rangers) equipped with several powerful weaponry and unique cybertronian abilities.

Meanwhile, on Cybertron, Shockwave (disguised as the Autobot Longarm Prime) sabotages several Elite Guard operations in preparation for Megatron's return, unaware that Megatron and Starscream are lost in deep space, trying to gain control of Omega Supreme. Suspecting that the double-agent may be the escaped convict Wasp, Ultra Magnus sends Sentinel and Jazz back to Earth to find and apprehend Wasp, who has found his way to Earth to exact revenge on Bumblebee for framing him. Soundwave and Arcee reappear, with Soundwave being accompanied by minions Laserbeak and Ratbat. New characters introduced in season 3 include the Constructicon Dirt Boss, the Autobot scientist Perceptor, Prowl's mentor Yoketron (who only appears in flashbacks of his most promising student Prowl), and the flying Elite Guard members Jetstorm and Jetfire.

In the two-part finale, "Endgame", Jazz joins Optimus Prime's team on Earth, while Megatron and Starscream also find their way back to Earth, using information stored deep within Arcee's subconscious mind to create an army of Omega Supreme-sized robots in Lugnut's likeness. Optimus defeats Megatron with the aid of Ultra Magnus' Magnus Hammer (which destroys Megatron's fusion cannon) and a "Wingblade" jetpack built by Professor Sumdac, Ratchet, and Sari while Prowl sacrifices his own vital Spark to reassemble most of the AllSpark into what resembles the Matrix of Leadership, killing Starscream in the process, and destroying the "Lugnut Supremes" all at once. Megatron is arrested, and the Autobots return to Cybertron, and are hailed as heroes upon arriving on their home world with Sari who is intent on learning what is to be an Autobot and finally learn about her unique origins.

A fourth season was initially planned for, consisting of more than just the regular thirteen or sixteen episodes, but was ultimately cancelled. According to The AllSpark Almanac II, The Complete AllSpark Almanac, and issue #71 of the Transformers Collectors' Club magazine, season four's main theme would have been the discovery of Energon deposits left by the Allspark across Detroit. Various ideas planned for the much longer cancelled fourth season include: 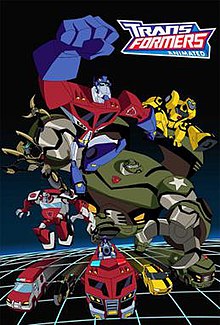 The main Autobots are Optimus Prime, Prowl, Ratchet, Bulkhead, and Bumblebee. The main Decepticon cast is made up of Megatron, Starscream, Blitzwing, Lugnut, and Blackarachnia. The main humans, or as the Transformers call them, "organics", [7] are Professor Isaac Sumdac, Sari Sumdac, and Captain Fanzone.

The series is animated by Japanese animation studios MOOK DLE, The Answer Studio, and Studio 4°C.[ citation needed] Formerly known by the working title Transformers: Heroes, its new simplified title was designed to specifically distinguish it from the live-action film released in July 2007, months before the first episode aired. [6] The series is distributed internationally by Entertainment Rights. [3]

The first episode was due to be screened in full on November 3–4, 2007, at the NTFA Mini-Con, a Transformers convention in Arlöv, Sweden, but US toymaker Hasbro pulled their approval of the screening of the full episode, despite it being green-lighted by Hasbro Nordic at first. The episode had to be cut down to the first 11 minutes. [9] [10]

While Transformers Animated had aired and completed its run in many other territories, the release of the series in Japan had been delayed. However, on December 18, 2009, it was announced through the launch of the official website that Takara Tomy would be bringing the series to Japan come Spring 2010. [5] Later, TV Aichi confirmed the exact date of broadcast, which was April 3, 2010, at 8:00AM on the TV Tokyo Network. [11] The website had launched with very little content available, with a trailer and wallpaper of Optimus Prime, later with adding Bumblebee media. As with the movie when released in Japan, Takara Tomy is not renaming Optimus to Convoy as they have done in past properties. However, in a solicitation preview of the key chains, Bulkhead was renamed as Ironhide in toy version. [12]

A two-disc set containing the complete first season, from "Home Is Where the Spark Is" to "Megatron Rising Part II".
Also includes a season 2 "sneak peek" photo gallery.

A two-disc set containing the complete second season, from "The Elite Guard" to "A Bridge to Close Part II", with audio commentary on selected episodes.
Also includes the shorts "Starscream Heckles Megatron" and "Explosive Punch" and a photo gallery.

Shout! Factory released the third season on DVD on June 10 as well as the complete series afterwards.

Whereas in North America the series was released in complete seasons, the UK instead got several single-disc "volumes" containing four episodes each, also featuring full-screen video, but with audio and subtitles in English and German.

Contains the feature-length premiere "Transform and Roll Out" and the shorts "Career Day" and "Evel Knievel Jump".

Contains episodes 4 Home Is Where the Spark Is, 5 Total Meltdown, 6 Blast From the Past and 7 Thrill of the Hunt

Contains episodes 8 Nanosac, 9 Along Came a Spider, 10 Sound and Fury, 11 Lost and Found

Contains episodes 17 The Elite Guard, 18 Return of the Headmaster, 19 Mission Accomplished and 20 Garbage In, Garbage Out

Contains episodes 21 Velocity, 22 Rise of the Constructicons, 23 A Fistful of Energon and 24 S.U.V - Society of Ultimate Villany

Germany saw the same releases as the UK.

Contains the feature-length premiere "Transform and Roll Out" and the shorts "Career Day" and "Evel Knievel Jump".

Contains the episodes "Home Is Where the Spark Is" through to "The Thrill of the Hunt".

Contains the episodes "Nanosec" through to "Lost and Found".

Contains the episodes "The Elite Guard" through to "Garbage In, Garbage Out"

Contains the episodes "Velocity" through to "SUV: Society of Ultimate Villainy"

Contains the episodes "Autoboot Camp" through to "A Bridge Too Close, Part II"

In a press release by Takara Tomy, it was announced that starting in Fall 2010, they would be releasing the series on DVD by Paramount Home Entertainment Japan. [32]

Transformers Animated: The Game is the first game based on the series. Released for the Nintendo DS platform in October 2008 by Activision.