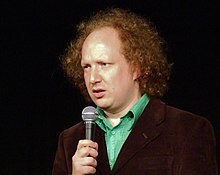 Andy Zaltzman is an English comedian

British humour carries a strong element of satire aimed at the absurdity of everyday life. Common themes include sarcasm, tongue-in-cheek, banter, insults, self-deprecation, taboo subjects, puns, innuendo, wit, and the British class system. [1] These are often accompanied by a deadpan delivery which is present throughout the British sense of humour. [2] It may be used to bury emotions in a way that seems unkind in the eyes of other cultures. [3] Jokes are told about everything and almost no subject is off-limits, though a lack of subtlety when discussing controversial issues is sometimes considered insensitive. [4] Many British comedy series have become successful internationally, serving as a representation of British culture to overseas audiences.

Some themes (with examples) that underpinned late-20th-century British humour were: [5]

Innuendo in British humour is evident in the literature as far back as Beowulf and Chaucer, and it is a prevalent theme in many British folk songs. Shakespeare often used innuendo in his comedies, but it is also often found in his other plays, as in Hamlet act 4 scene v:

Young men will do't if they come to't / By Cock, they are to blame.

Restoration comedy is notorious both for its innuendo and for its sexual explicitness, a quality encouraged by Charles II (1660–1685) personally and by the rakish aristocratic ethos of his court.

In the Victorian era, Burlesque theatre combined sexuality and humour in its acts. In the late 19th century, magazines such as Punch began to be widely sold, and innuendo featured in its cartoons and articles.

In the early 1930s, cartoon-style saucy postcards (such as those drawn by Donald McGill) became widespread, and at their peak 16 million saucy postcards were sold per year. They were often bawdy, with innuendo and double entendres, and featured stereotypical characters such as vicars, large ladies and put-upon husbands, in the same vein as the Carry On films. This style of comedy was common in music halls and in the comedy music of George Formby. Many comedians from music hall and wartime gang shows worked in radio after World War 2, and characters such as Julian and Sandy on Round the Horne used innuendo extensively. Innuendo also features heavily in many British films and TV series of the late 20th century. The Carry On series was based largely on smut and innuendo, and many of the sketches of The Two Ronnies are in a similar vein. Innuendo with little subtlety was epitomised by Benny Hill, and the Nudge Nudge sketch by Monty Python openly mocks the absurdity of such innuendo.

By the end of the 20th century more subtlety in sexual humour became fashionable, as in Not the Nine O'Clock News and Blackadder, while Bottom and Viz continued the smuttier trend. In contemporary British comedy Julian Clary is an example of a prolific user of innuendo.

Disrespect to members of the establishment and authority, typified by:

The absurd and the surreal, typified by:

Black humour, in which topics and events that are usually treated seriously are treated in a humorous or satirical manner, typified by:

The humour, not necessarily apparent to the participants, inherent in everyday life, as seen in:

The 'war' between parents/teachers and their children, typified by:

The British class system, especially class tensions between characters; and pompous or dim-witted members of the upper/middle classes or embarrassingly blatant social climbers, typified by:

Also, some comedy series focus on working-class families or groups, such as:

The lovable rogue, often from the impoverished working class, trying to 'beat the system' and better himself, typified by:

The embarrassment of social ineptitude, typified by:

The An Englishman, an Irishman and a Scotsman joke format is one common to many cultures, and is often used in English, including having the nationalities switched around to take advantage of other stereotypes. These stereotypes are somewhat fond, and these jokes would not be taken as xenophobic. This sort of affectionate stereotype is also exemplified by 'Allo 'Allo!, a programme that, although set in France in the Second World War, and deliberately performed in over-the-top accents, mocked British stereotypes as well as foreigners. This also applies to a lot of the regional stereotypes in the UK. Regional accent and dialect are used in such programmes as Hancock's Half Hour, Auf Wiedersehen, Pet and Red Dwarf, as these accents provide quick characterisation and social cues.

Although racism was a part of British humour, it is now frowned upon, and acts such as Bernard Manning and Jim Davidson are pilloried. Although some observers once argued certain comedy series of the 1970s were targeting racism rather than being in sympathy with it, such series as Love Thy Neighbour and It Ain't Half Hot Mum are no longer considered acceptable for repeat screenings. Along with the first of these two series, Till Death Us Do Part, was an attempt to deal humourously with the influx of immigrants to the United Kingdom, but it is now usually considered to have been counter-productive. Still much admired, however, Fawlty Towers featured the mistreatment of the Spanish waiter, Manuel, but the target was the bigotry of the lead character, Basil Fawlty. The Young Ones featured a police officer (in sunglasses) engaged in racial profiling, only to discover the man was white and wearing dark gloves. Later, The Fast Show has mocked people of other races, such as the Chanel 9 sketches, and Banzai has mimicked Japanese games shows, which have an exaggerated sense of violence, sex and public absurdity. Goodness Gracious Me turned stereotypes on their heads in sketches such as 'Going for an English' and when bargaining over the price of a newspaper. An episode from The Goodies depicted all of the black population of South Africa leaving to escape apartheid, leaving the Afrikaners with nobody to oppress – instead, they begin a system of discrimination based on height, targeting short people, labelled "apart-height".

Harsh sarcasm and bullying, though with the bully usually coming off worse than the victim – typified by:

Tolerance of, and affection for, the eccentric

Tolerance of, and affection for, the eccentric, especially when allied to inventiveness, typified by:

Usually, for television, the performance of a practical joke on an unsuspecting person whilst being covertly filmed, epitomised by: