Brendan James Fraser ( /ˈfreɪzər/ FRAY-zər; [1] born December 3, 1968 [2]) is an American-Canadian actor. [3] Fraser is known for his leading roles in blockbusters, comedies, and dramatic films. He gained prominence for his role as Rick O'Connell in The Mummy trilogy (1999–2008).

In 2018, Fraser said that he had been sexually assaulted by Philip Berk, the then-president of the Hollywood Foreign Press Association (HFPA), in 2003. The alleged assault, his subsequent divorce, the death of his mother, and health problems led to a pause in his career. [4] [5] His career was revitalized by his appearances in major films such as No Sudden Move (2021) and The Whale (2022).

Fraser, the youngest of four boys, was born in Indianapolis, Indiana, the son of Canadian parents Carol Mary ( née Genereux; 1937–2016) [10] and Peter Fraser. His mother was a sales counselor, and his father was a former journalist who worked as a Canadian foreign service officer for the Government Office of Tourism. [11] [12] [13] His maternal uncle, George Genereux, was the only Canadian to win a gold medal in the 1952 Summer Olympics, at the Olympic Trap. [14] He has three older brothers: Kevin, Regan, and Sean. [15] He has Irish, Scottish, German, Czech, and French-Canadian ancestry. [16] He holds dual Canadian and American citizenship. [17]

Fraser's family moved often during his childhood, living in Eureka, California; Seattle, Washington; Ottawa, Ontario; the Netherlands; and Switzerland. He attended Upper Canada College, [18] a private boarding school in Toronto. While on vacation in London, England, he attended his first professional theatre show in the West End, which began his interest in acting. [19]

He graduated from Seattle's Cornish College of the Arts in 1990. [12] [20] He began acting at a small acting college in New York City. He planned on studying toward a Master of Fine Arts in Acting from Southern Methodist University, but stopped in Hollywood on the way and decided to remain there to work in film. [21]

In 1991, Fraser made his film debut as a Seaman headed to Vietnam in Dogfight. He got his first leading film role in the 1992 comedy film Encino Man where he played a frozen pre-historic caveman who is thawed out in the present day. [22] The film was a moderate box office success. [23] That same year he starred with Matt Damon and Chris O'Donnell in School Ties.

In 1994, he played Steve Nebraska in The Scout and Montgomery "Monty" Kessler in With Honors as well as co-starred with Adam Sandler and Steve Buscemi in Airheads. All three were box office failures. He starred in films such as Philip Ridley's The Passion of Darkly Noon (1995) and The Twilight of the Golds (1997) which also did not fare well at the box office. He also had a small part in the movie Now and Then (1995).

He had his first major box office success with the 1997 comedy film George of the Jungle [24] which was based on the animated series of the same title created by Jay Ward.

He received critical acclaim for his dramatic role in 1998's Gods and Monsters, which was based on the life of James Whale ( Ian McKellen), who directed Frankenstein. The film was written and directed by Bill Condon, and follows the loss of creativity, ambiguous sexuality and the bond between a heterosexual gardener (played by Fraser) and a homosexual, tortured and ailing filmmaker (played by McKellen). [25] 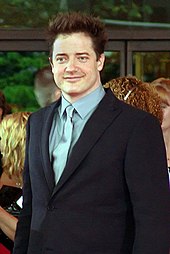 Fraser in Toronto in June 2006

His biggest commercial success came when he portrayed Rick O'Connell in the adventure fantasy film The Mummy (1999) and its sequel The Mummy Returns (2001). [26]

In between these successes, he also starred in the box office bombs Dudley Do-Right (1999) (which was based on another Jay Ward animated series) and Monkeybone (2001); though he did have moderate success with the 1999 romantic comedy Blast from the Past and the 2000 fantasy comedy Bedazzled, a remake of the 1967 British film of the same name. [24] He lent his voice for the unreleased animated film Big Bug Man, with Marlon Brando.

In 2002, he starred alongside Michael Caine in the political drama The Quiet American which was well received by critics. [27] The following year, he starred in the live-action/animated film Looney Tunes: Back in Action as its human lead, D.J. Drake (he also voiced the Tasmanian Devil). In 2004, he appeared as part of an ensemble cast in the Academy Award-winning film Crash. [28] 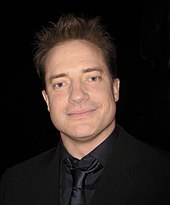 Fraser at the premiere of The Mummy: Tomb of the Dragon Emperor in July 2008

He has also made guest appearances on the television shows Scrubs, King of the Hill, and The Simpsons. In March 2006, he was inducted into Canada's Walk of Fame, [11] the first American-born actor to receive the honor. However, as of 2022, he does not have a star on the Hollywood Walk of Fame. After a six-year hiatus in the franchise, Fraser returned for the second sequel to The Mummy released in August 2008 and titled The Mummy: Tomb of the Dragon Emperor. Filming started in Montreal on July 27, 2007, and the film also starred Jet Li as Emperor Han. That same year, he starred in the 3D film adaptation of Jules Verne's Journey to the Center of the Earth and the fantasy film Inkheart (chosen personally for the lead role by the novel's author Cornelia Funke).

Fraser starred as "Brick" in the West End production of Tennessee Williams's Cat on a Hot Tin Roof in September 2001, directed by Anthony Page. Castmates included Ned Beatty, Frances O'Connor and Gemma Jones. The show closed on January 12, 2002, with Fraser garnering many excellent reviews. [29] In 2010, Fraser starred in a Broadway production of Elling, but the play closed after one week, due to lackluster reviews. [30] After appearing in the critically panned Furry Vengeance in 2010, Fraser moved from being represented by William Morris Endeavor to the Creative Artists Agency. [31] In 2010, he starred in Whole Lotta Sole directed by Terry George and in 2011, he was set to play William Tell in The Legend of William Tell: 3D, directed by Eric Brevig, with whom Fraser had also worked in Journey to the Center of the Earth. [32] Filming was delayed and late in 2011, Fraser sued the producer Todd Moyer for promised wages. Moyer later countersued for assault, [33] which Fraser dismissed as a desperate attempt to avoid paying his debt. [34] In 2013, he played an Elvis Presley impersonator in the ensemble black comedy Pawn Shop Chronicles. [35] 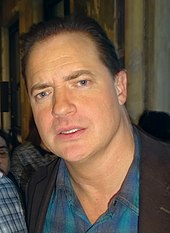 In 2016, Fraser replaced Ray Liotta in the Bollywood thriller Line of Descent. [36] Fraser later joined the recurring cast of the television drama series The Affair during season 3 where he portrayed the misery-minded prison guard Gunther. [37] He portrayed Getty family fixer James Fletcher Chace in the FX anthology series Trust, which premiered on March 25, 2018. [8] Fraser portrayed Clifford "Cliff" Steele / Robotman in the Titans TV series, with Jake Michaels physically portraying Robotman. He reprised the role in the spin-off series Doom Patrol, where he voices the character and appears as Steele in flashbacks; Riley Shanahan – replacing Jake Michaels in Titans – physically portrays Robotman. [9] This string of appearances led many publications to label his sudden comeback as the "Brenaissance". [38] [39] [40]

In September 2020, Fraser was cast as gangster Doug Jones in Steven Soderbergh's period crime film No Sudden Move, which was released in 2021. [41] In January 2021, Fraser was announced as the lead in Darren Aronofsky's upcoming film The Whale. [42] [43] The film premiered at the Venice International Film Festival in September 2022. Fraser's performance was highly praised and the film received a six-minute standing ovation at the festival. [44]

In August of the same year, Fraser was announced as part of the cast of Martin Scorsese's upcoming film Killers of the Flower Moon, as well as Max Barbakow's upcoming comedy film Brothers. [45] In October 2021, Fraser was cast to portray the villain Firefly in the superhero film Batgirl, set in the DC Extended Universe; [46] the release of the film was canceled in August 2022 after a change in Warner Bros. studio priorities. [47] [48]

After their home in Beverly Hills, California sold in April 2007 for $3 million, [50] Fraser's publicist announced in December 2007 that the couple had decided to divorce. [51] [52] Fraser was ordered to pay a monthly alimony sum of $50,000 for a period of 10 years or until remarriage of Smith, whichever occurred first, in addition to the $25,000 monthly payment for child support. [53] In early 2011, Fraser petitioned the courts for a reduction of his alimony payments, asserting that he was unable to meet the annual obligation of $600,000; he did not contest the child support payments. [53] In late 2011, Smith accused Fraser of fraud by hiding financial assets and not disclosing film contracts for Extraordinary Measures and Furry Vengeance. [53] In 2014, the court ruled against Fraser's request for a reduction in alimony and against Smith's allegation of fraud. [53] Both parents were credited for being actively engaged in the lives of their sons. [53]

Fraser speaks French [54] and serves on the board of directors for FilmAid International. [55] He is an accomplished amateur photographer [11] and has used several instant cameras in movies and on TV shows, most notably on his guest roles on Scrubs. In his first appearance, he used a Polaroid pack film, and on his second appearance, he used a Holga with a Polaroid back, a Japanese-only model. The book Collector's Guide to Instant Cameras has a dedication to Fraser. [56] He is also an accomplished amateur archer. [4] [57]

The physical demands of the stunts and maneuvers Fraser performed in his action and comedy roles eventually required him to undergo several surgeries over a period of seven years, including a partial knee replacement, a laminectomy, and vocal cord surgery. [58]

In 2018, Fraser said that he had been sexually assaulted by Philip Berk, the then-president of the Hollywood Foreign Press Association (HFPA), the nonprofit organization that votes for the Golden Globe Awards, at a luncheon in 2003. The alleged assault, his subsequent divorce, and the death of his mother launched Fraser into a depression that, combined with his health problems, led to a pause in his career. [4] [5]

Several publications and social media users interpreted that Fraser was "blacklisted" from Hollywood because of his allegation against Berk, allegations which Berk denies. [59] [60] In the 2018 GQ piece where Fraser first publicly made the allegation, he said "The phone does stop ringing in your career, and you start asking yourself why. There's many reasons, but was [this incident] one of them? I think it was." [4] In contrast, Fraser also clarified in his 2019 appearance on the radio show Sway in the Morning, "I don't think the HFPA really wield that much power." [61] In 2022, Fraser told GQ that if he receives a nomination by the HFPA for his latest film The Whale, he "will not participate" because of the "history" he has with the organization. [60]

Since 2018, Fraser has been a celebrity judge [62] [63] on the Dancing Stars of Greenwich annual charity gala which raises money for the non-profit organisation Abilis, a local charity which supports more than 800 individuals and their families with disabilities in Fairfield County, Connecticut. His former wife, Afton Fraser, also takes part in the dance competition. [64] [63] In 2022, Afton and Brendan Fraser received the Heart of Abilis Award for their support and fund raising work for the charity. [65]