From Wikipedia, the free encyclopedia
Written description of what a breed should look like

In animal husbandry or animal fancy, a breed standard is a description of the characteristics of a hypothetical or ideal example of a breed. [1]: xix  The description may include physical or morphological detail, genetic criteria, or criteria of athletic or productive performance.[ citation needed] It may also describe faults or deficiencies that would disqualify an animal from registration or from reproduction. [1]: xix  The hypothetical ideal example may be called a "breed type".[ citation needed]

Contents of a breed standard 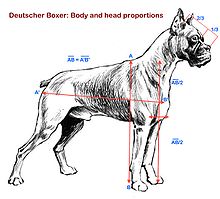 In the American Poultry Association breed standards for poultry, for example, ducks and geese are divided by weight, and chicken breeds are divided by size. Chickens are also divided into egg laying, meat, and ornamental varieties. [3] In cattle, breed standards allow for comparisons and the selection of the best breeds to raise. [4]

There is breed standard for dogs, cats, horses, chicken breeds, and others. The standard is used as a comparative parameter for judging animals in conformation shows competitions. [5]