From Wikipedia, the free encyclopedia
Bony "loops" present in fish, which support the gills 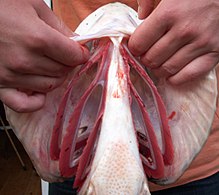 Gill arches supporting the gills in a pike

Branchial arches, or gill arches, are a series of bony "loops" present in fish, which support the gills. As gills are the primitive condition of vertebrates, all vertebrate embryos develop pharyngeal arches, though the eventual fate of these arches varies between taxa. In jawed fish, the first arch (the mandibular arch) develops into the jaws. The second gill arch (the hyoid arch) develops into the hyomandibular complex, which support the back of the jaw and the front of the gill series. The remaining posterior arches (simply called branchial arches) support the gills. In amphibians and reptiles, many elements are lost including the gill arches, resulting in only the oral jaws and a hyoid apparatus remaining. In mammals and birds, the hyoid is simplified further.

All basal vertebrates breathe with gills. The gills are carried right behind the head, bordering the posterior margins of a series of openings from the esophagus to the exterior. Each gill is supported by a cartilaginous or bony gill arch. [1] Bony fish (osteichthyans) have four pairs of arches, cartilaginous fish (chondrichthyans) have five to seven pairs, and primitive jawless fish ("agnathans") have up to seven. The vertebrate ancestor no doubt had more arches, as some of their chordate relatives have more than 50 pairs of gills. [2]

In amphibians and some primitive bony fish, the larvae bear external gills, branching off from the gill arches. [3] These are reduced in adulthood, their function taken over by the gills proper in fish and by lungs in most amphibians. Some neotenic amphibians retain the external larval gills in adulthood, the complex internal gill system as seen in fish apparently being irrevocably lost very early in the evolution of tetrapods. [4]

The branchial system is typically used for respiration and/or feeding. Many fish have modified posterior gill arches into pharyngeal jaws, often equipped with specialized pharyngeal teeth for handling particular prey items (long, sharp teeth in carnivorous moray eels compared to broad, crushing teeth in durophagous black carp). In amphibians and reptiles, the hyoid arch is modified for similar reasons. It is often used in buccal pumping and often plays a role in tongue protrusion for prey capture. In species with highly specialized ballistic tongue movements such as chameleons or some plethodontid salamanders, the hyoid system is highly modified for this purpose, while it is often hypertrophied in species which use suction feeding. Species such as snakes and monitor lizards, whose tongue has evolved into a purely sensory organ, often have very reduced hyoid systems.

The primitive arrangement is 7 (possibly 8) arches, each consisting of the same series of paired (left and right) elements. order from dorsal-most (highest) to ventral-most (lowest), these elements are the pharyngobranchial, epibranchial, ceratobranchial, hypobranchial, and basibranchial. The pharyngobranchials may articulate with the neurocranium, while the left and right basibranchials connect to each other (often fusing into a single bone). When part of the hyoid arch, the names of the bones are altered by replacing "-branchial" with "-hyal", thus "ceratobranchial" becomes "ceratohyal". [5]

Amniotes do not have gills. The gill arches form as pharyngeal arches during embryogenesis, and lay the basis of essential structures such as jaws, the thyroid gland, the larynx, the columella (corresponding to the stapes in mammals) and in mammals the malleus and incus. [2]