From Wikipedia, the free encyclopedia
Subfamily of mammals

Bovines ( subfamily Bovinae) comprise a diverse group of 10 genera of medium to large-sized ungulates, including cattle, bison, African buffalo, water buffalos, and the four-horned and spiral-horned antelopes. The evolutionary relationship between the members of the group is still debated, and their classification into loose tribes rather than formal subgroups reflects this uncertainty. General characteristics include cloven hooves and usually at least one of the sexes of a species having true horns. The largest extant bovine is the gaur.

In many countries, bovid milk and meat is used as food by humans. Cattle are kept as livestock almost everywhere except in parts of India and Nepal, where they are considered sacred by most Hindus. Bovids are used as draft animals and as riding animals. Small breeds of domestic bovid, such as the Miniature Zebu, are kept as pets. Bovid leather is durable and flexible and is used to produce a wide range of goods including clothing and bags. 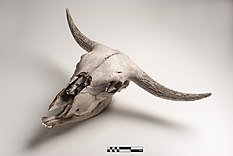