From Wikipedia
https://en.wikipedia.org/wiki/Bounty_hunter
Person who catches fugitives for a monetary reward
For other uses, see Bounty hunter (disambiguation).

A bounty hunter is a private agent working for bail bonds who captures fugitives or criminals for a commission or bounty. The occupation, officially known as bail enforcement agent, or fugitive recovery agent, has traditionally operated outside the legal constraints that govern police officers and other agents of the state. This is because a bail agreement between a defendant and a bail bondsman is essentially a civil contract that is incumbent upon the bondsman to enforce. As a result, bounty hunters hired by a bail bondsman enjoy significant legal privileges, such as forcibly entering a defendant's home without probable cause or a search warrant; however, since they are not police officers, bounty hunters are legally exposed to liabilities that normally exempt agents of the state—as these immunities enable police to perform their designated functions effectively without fear—and everyday citizens approached by a bounty hunter are neither required to answer their questions nor allowed to be detained. Bounty hunters are typically independent contractors paid a commission of the total bail amount that is owed by the fugitive; they provide their own PLI and only get paid if they are able to find the " skip" and bring them in.

Bounty hunting is a vestige of common law which was created during the Middle Ages. Bounty hunters primarily draw their legal imprimatur from an 1872 Supreme Court decision, Taylor v. Taintor. The practice historically existed in many parts of the world; however, as of the 21st century, it is found almost exclusively in the United States as the practice is illegal under the laws of most other countries. State laws vary widely as to the legality of the practice; Illinois, Kentucky, Oregon and Wisconsin have outlawed commercial bail bonds, while Wyoming offers few (if any) regulations governing the practice. [1] 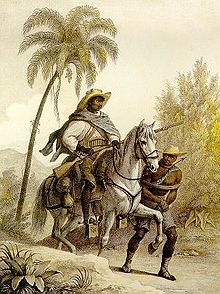 An Afro-Brazilian bounty hunter looking for escaped slaves in an 1823 portrait by Johann Moritz Rugendas.

Before the Civil War

In 1873, the Supreme Court noted that bounty hunters were a part of the U.S. law enforcement system with a decision in Taylor v. Taintor: [2]

When the bail is given, the principal is regarded as delivered to the custody of his sureties. Their domain is a continuance of the original imprisonment. Whenever they choose to do so, they may seize him and deliver him up to his discharge; and if it cannot be done at once, they may imprison him until it can be done. They may exercise their rights in person or by agent. They may pursue him into another state; may arrest him on the Sabbath; and if necessary, may break and enter his house for that purpose. The seizure is not made by virtue of due process. None is needed. It is likened to the arrest by the sheriff of an escaped prisoner.

In modern times, bounty hunters are known as bail enforcement agents or fugitive recovery agents and carry out arrests mostly of those who have skipped bail or whose bail has been revoked. [3] [4] The term "bounty hunting" is neither often used nor liked by many in the profession, due to its historical associations.[ citation needed]

When undertaking arrest warrants, agents may wear bullet-resistant vests, badges, and other clothing bearing the inscription "bail enforcement agent" or similar titles. [5] Many agents also use two-way radios to communicate with each other.[ citation needed] Many agents arm themselves with firearms, or sometimes with less lethal weapons, such as tasers, [5] batons, tear gas ( CS gas, pepper spray) [5] or pepper spray projectiles.[ citation needed]

In the United States, the National Association of Fugitive Recovery Agents is the professional association representing this industry. [6]

Bounty hunters in the United States are employed by bail bondsmen. The bounty hunter is usually paid about 10% of the total bail amount, but this commission can vary on an individual, case-by-case basis, usually depending upon the difficulty level of the assignment and the approach used to exonerate the bail bond. If the fugitive eludes bail, the bondsman, not the bounty hunter, is responsible for 100% of the total bail amount. This is a way of ensuring clients arrive at trial. As of 2003, bounty hunters claimed to catch 31,500 bail jumpers per year, about 90% of people who jump bail. [7]

Bounty hunters have varying levels of authority in their duties with regard to their targets, depending on which states they operate in. Barring restrictions applicable state by state, a bounty hunter may enter the fugitive's legal residence without any warrant, besides the original bail bonds contract signed by the fugitive, to execute a re-arrest.

In some states, bounty hunters do not undergo any formal training, [8] and are generally unlicensed, only requiring sanction from a bail bondsman to operate. In other states, however, they are held to varying standards of training and license. State legal requirements are often imposed on out-of-state bounty hunters, so a fugitive could temporarily escape rearrest by entering a state in which the bail agent has limited or no jurisdiction.[ citation needed]

In the United States legal system, the 1873 U.S. Supreme Court case Taylor v. Taintor, 16 Wall (83 U.S. 366, 21 L.Ed. 287), is cited as having established that the person into whose custody an accused is remanded as part of the accuser's bail has sweeping rights to that person. [9] Though this may have been accurate at the time the decision was reached, the portion cited was obiter dictum and has no binding precedential value. [10]

As of 2008, four states, Illinois, Kentucky, Oregon, and Wisconsin prohibited the practice, as they have abolished commercial bail bonds and banned the commercial bail bonds industry within their borders. [11] As of 2012, Nebraska and Maine similarly prohibit surety bail bonds. [12] Some states such as Texas and California require a license to engage in bounty hunting while others may have no restrictions. [13]

There have been some states that have rolled out specific laws that govern bounty hunting. For example, Minnesota laws provide that a bounty hunter cannot drive a white, black, maroon, or dark green vehicle, or wear any colors that are reserved for the police in the state (e.g. maroon, which is worn by the Minnesota Highway Patrol). [14]

The State of Connecticut has a detailed licensing process which requires any person who wants to engage in the business as a bail enforcement agent (bounty hunter) to first obtain a professional license from the Commissioner of Public Safety; specifically detailing that "No person shall, as surety on a bond in a criminal proceeding or as an agent of such surety, engage in the business of taking or attempting to take into custody the principal on the bond who has failed to appear in court and for whom a re-arrest warrant or capias has been issued unless such person is licensed as a bail enforcement agent". Connecticut has strict standards which require bail enforcement agents to pass an extensive background check and, while engaging in fugitive recovery operations, wear a uniform, notify the local police barrack, wear a badge, and only carry licensed and approved firearms, including handguns and long guns which are permitted. Recently, the Connecticut State Police converted its bail enforcement agent licensing unit to reflect the role bail enforcement agents play in the Connecticut criminal justice system; placing them in the newly defined Department of Emergency Services and Public Protection. [15]

Several schools in Connecticut have obtained certification by the Connecticut State Police to pre-license bail enforcement agents in a minimum of 20 hours of criminal justice training and a minimum of eight hours of firearms training. Some of the more advanced schools offer specialized training in the area of tactical firearms to prepare BEAs for conducting dangerous recovery operations. [16]

In Florida, a bounty hunter must obtain a "limited surety agent" license from the Florida Department of Financial Services - Bureau of Agent and Agency Licensing, to legally apprehend bail fugitives. [17]

Louisiana requires bounty hunters to wear clothing identifying them as such. [18]

A Nevada bounty hunter is referred to as a bail enforcement agent or bail enforcement solicitor. In order to meet state requirements, the bail agent must complete a minimum 80 hours of training (or a POST certification), and that they pass the required examinations and obtain a bail enforcement agent license by the Nevada Division of Insurance within nine months of employment. [19] [20] To acquire such license, one must be at least 21 years old, a United States citizen, have a high school diploma or equivalent, and undergo the required training and pass a state examination. [21][ citation needed]

A Texas bounty hunter is required to be a peace officer, Level III (armed) security officer, or a private investigator. [22] [23][ better source needed]

International extradition exists only by authority of an international treaty with the nation where the fugitive is located. Extradition treaties limit extradition to certain offenses and not all fugitives can be extradited. Generally, the crime being charged against the fugitive must be recognized as a crime in the jurisdiction from which extradition is being sought.

Bounty hunter Duane "Dog" Chapman, star of the TV series Dog the Bounty Hunter, was arrested in Mexico after he apprehended the multi-millionaire rapist and fugitive Andrew Luster. Chapman was subsequently released and returned to the U.S. [7] but was later declared a fugitive by a Mexican prosecutor and was subsequently arrested in the United States to be extradited back to Mexico. All charges were later dropped due to the crime passing the statute of limitations date. Chapman has maintained that under Mexico's citizen arrest law, he and his crew acted under proper policy.[ citation needed]

Daniel Kear of Fairfax, Virginia pursued and abducted Sidney Jaffe at a residence in Canada and returned him to Florida to face trial. Kear was extradited to Canada in 1983, and convicted of kidnapping. [24] [25]

Several bounty hunters have been arrested for killing the fugitive or apprehending the wrong individuals, mistaking innocent people for fugitives. [26]

In a Texas case, bounty hunters Richard James and his partner DG Pearson were arrested in 2001 for felony charges during an arrest. The charges were levied by the fugitive and his family, but were later dismissed against the hunters after the fugitive's wife shot a deputy sheriff in another arrest attempt of the fugitive by the county sheriff's department. The hunters sued the fugitive and family, winning the civil suit for malicious prosecution with a judgment amount of $1.5 million.[ citation needed]