From Wikipedia
(Redirected from Body double)
https://en.wikipedia.org/wiki/Body_double
Person who substitutes for another actor in a film scene such that their face is not shown
This article is about the job in visual-media production. For the film, see Body Double. For the novel, see Body Double (novel). For the strategic impersonation of political or military figures, see Political decoy.

In filmmaking, a double is a person who substitutes another actor such that the person's face is not shown. There are various terms associated with a double based on the specific body part or ability they serve as a double for, such as stunt double, "dance double", "butt double" and "hand double".

A body double or photography double is used in certain specific shots to replace the credited actor of a character. [1] The body double's face is obscured to maintain the illusion that they are the same character; usually by shooting their body at an angle that leaves their face out (such as by showing the body double from the back) or in post-production by superimposing the original actor's face over the body double's. The double's face is usually not seen on-camera, particularly when they do not facially resemble the actor; a wig will usually be employed if the double's hair color is different from that of the main actor. [2] This is in contrast to a stand-in, who replaces an actor for non-filming purposes such as scene arrangement and lighting adjustments. [3]

A body double must sometimes be able to recite his or her lines with the same timing as the actor, and also reproduce the exact physical actions in co-ordination with the other principal actors; usually, doubles must have a strong resemblance to the actor they replace. [4] An extensively used body double, especially when used in cases where the credited actor is unavailable, unwilling to film or has died, is known as a fake Shemp.

A double can be used for cases where special skills are needed—such as playing musical instruments, dancing or other athletic abilities. Also, if only a part of the body is shown, the term for the double might be more specific. A common double is a "hand double", who is used to shoot inserts where only the hand or arm is in the shot. [3] These inserts are often shot by the second unit with a double at a later point in production primarily because it allows the main unit to use the lead actors' time more efficiently.

Body doubles are often used for shots involving nudity. The reasons for this vary. Actors' nude bodies may have too many physical flaws and imperfections that would show on camera, especially due to aging, while some actors are uncomfortable performing nude. [5] [6] A common body double is the "butt double", mostly used with TV, since whole-body nudity is less common in that medium. The term "stunt butt" is also attested, as is " stunt cock". [7] [8]

In some productions, a scene calls for two characters in the same shot who are portrayed by a single actor. A body double can portray one of the characters, while the credited actor plays the other, thus enabling both characters to appear simultaneously on camera. An unusual example of body doubling took place in the movie Terminator 2: Judgment Day. A scene requiring Linda Hamilton to appear as two Sarah Connors in the same scene was created by employing Hamilton's identical twin sister Leslie as her double. [9] This has become less common with digital editing currently available which can splice together multiple takes, allowing for an actor to perform as each character in separate takes that are joined together to create the image of the characters in same setting, such as with Deep Roy, who portrayed the Oompa-Loompas in Charlie and the Chocolate Factory. [10]

The 1984 film Body Double, directed by Brian De Palma, featured a plot that hinged on the discovery that one character had in fact served as a body double for another. [11] [12] 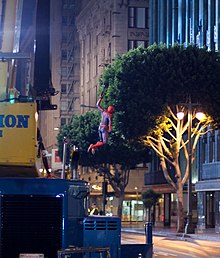 A stunt-double performing in a Spider-Man shoot

A stunt double is often a stunt performer, specifically a skilled replacement, used for dangerous sequences or other sophisticated stunts (especially fight scenes). Stunt doubles may be used in cases where an actor's physical condition or age precludes much activity, or when an actor is contractually prohibited from taking certain risks.

Stunt doubles should be distinguished from daredevils, who perform stunts for the sake of the stunt alone, often as a career. Sequences often do not place stunt doubles in the same mortal peril as the characters: for example, harnesses and wires can be digitally removed from the final film.

Many stunt doubles have long production careers as part of a star actor's contractual "support crew", along with the star's cooks, trainers, dressers, and assistants. Often stunt doubles have to look like their respective actors, in order to maintain the illusion that it is the actor on-screen. Stunt doubles for Eddie Murphy, John Wayne, Harrison Ford, Steve Martin, Salman Khan and Michael Landon have been associated with their lead actors for decades.

Non-humans are also known to have stunt doubles. For example, Enzo was the stunt double for his aging sire Moose on the sitcom Frasier. [13] Soccer, the Jack Russell terrier on Wishbone, reportedly hated swimming and therefore had stunt doubles. [14]

The Black Swan dance double controversy brought significant attention to dance doubles. After the 83rd Academy Awards, in which Natalie Portman won the Oscar for Best Actress for her role in Black Swan as a ballerina, controversy arose over how much credit for the dancing in the film was being given to her and how much to her "dance double", American Ballet Theatre soloist Sarah Lane. [15]