From Wikipedia
https://en.wikipedia.org/wiki/Blockbuster_(entertainment)
Term for a popular film
For the video rental chain, see Blockbuster LLC. 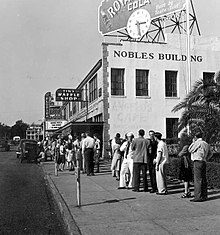 Queue for Gone with the Wind in Pensacola, Florida (1947)

A blockbuster is a work of entertainment—typically used to describe a feature film produced by a major film studio, but also other media—that is highly popular and financially successful. The term has also come to refer to any large-budget production intended for "blockbuster" status, aimed at mass markets with associated merchandising, sometimes on a scale that meant the financial fortunes of a film studio or a distributor could depend on it.

The term began to appear in the American press in the early 1940s, [1] referring to aerial bombs capable of destroying a whole block of buildings. [2] Its first known use in reference to films was in May 1943, when advertisements in Variety and Motion Picture Herald described the RKO film, Bombardier, as "The block-buster of all action-thrill-service shows!" Another trade advertisement in 1944 boasted that the war documentary, With the Marines at Tarawa, "hits the heart like a two ton blockbuster." Several theories have been put forward for the origin of the term in a film context. One explanation pertains to the practice of " block booking" whereby a studio would sell a package of films to theaters, rather than permitting them to select which films they wanted to exhibit. However, this practice was outlawed in 1948 before the term became common parlance; while pre-1948 high-grossing big-budget spectacles may be retrospectively labelled "blockbusters," this is not how they were known at the time. Another explanation is that trade publications would often advertise the popularity of a film by including illustrations showing long queues often extending around the block, but in reality the term was never used in this way. The term was actually first coined by publicists who drew on readers' familiarity with the blockbuster bombs, drawing an analogy with the bomb's huge impact. The trade press subsequently appropriated the term as short-hand for a film's commercial potential. Throughout 1943 and 1944 the term was applied to films such as Bataan, No Time for Love and Brazil. [3]

The term fell out of usage in the aftermath of World War II but was revived in 1948 by Variety in an article about big budget films. By the early 1950s the term had become standardised within the film industry and the trade press to denote a film that was large in spectacle, scale and cost, that would go on to achieve a high gross. In December 1950 the Daily Mirror predicted that Samson and Delilah would be "a box office block buster", and in November 1951 Variety described Quo Vadis as "a b.o. blockbuster [...] right up there with Birth of a Nation and Gone With the Wind for boxoffice performance [...] a super-spectacle in all its meaning". [3]

According to Stephen Prince, Akira Kurosawa's 1954 film Seven Samurai had a "racing, powerful narrative engine, breathtaking pacing, and sense-assaulting visual style" (what he calls a "kinesthetic cinema" approach to "action filmmaking and exciting visual design") that was "the clearest precursor" and became "the model for" the "visceral" Hollywood blockbuster "brand of moviemaking" that emerged in the 1970s. According to Prince, Kurosawa became "a mentor figure" to a generation of emerging American filmmakers who went on to develop the Hollywood blockbuster format in the 1970s, such as Steven Spielberg, George Lucas, Martin Scorsese and Francis Ford Coppola. [4]

In 1975, the usage of "blockbuster" for films coalesced around Steven Spielberg's Jaws. It was perceived as a new cultural phenomenon: fast-paced, exciting entertainment, inspiring interest and conversation beyond the theatre (which would later be called " buzz"), and repeated viewings. [5] The film is regarded as the first film of the "blockbuster era", and founded the blockbuster film genre. [6] Two years later, Star Wars expanded on the success of Jaws, setting box office records and enjoying a theatrical run that lasted more than a year. [7] After the success of Jaws and Star Wars, many Hollywood producers attempted to create similar "event" films with wide commercial appeal, and film companies began green-lighting increasingly large-budget films, and relying extensively on massive advertising blitzes leading up to their theatrical release. These two films were the prototypes for the "summer blockbuster" trend, [8] in which major film studios and distributors planned their annual marketing strategy around a big release by July 4. [9]

Eventually, the focus on creating blockbusters grew so intense that a backlash occurred, with some critics and film-makers decrying the prevalence of a "blockbuster mentality", [13] lamenting the death of the author-driven, "more artistic" small-scale films of the New Hollywood era (despite criticism of the praise the latter set of films received). [14] [15] This view is taken, for example, by film journalist Peter Biskind, who wrote that all studios wanted was another Jaws, and as production costs rose, they were less willing to take risks, and therefore based blockbusters on the "lowest common denominators" of the mass market. [16] In his book The Long Tail, Chris Anderson talks about blockbuster films, stating that a society that is hit-driven, and makes way and room for only those films that are expected to be a hit, is in fact a limited society. [17] In 1998, writer David Foster Wallace posited that films are subject to an inverse cost and quality law. [18]