This notion can be made more precise for an

. The original matrix is then considered as the "total" of these groups, in the sense that the

offset entry of some

Block matrix algebra arises in general from biproducts in categories of matrices. [3] 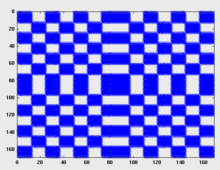 can be partitioned into four 2×2 blocks

The partitioned matrix can then be written as

It is possible to use a block partitioned matrix product that involves only algebra on submatrices of the factors. The partitioning of the factors is not arbitrary, however, and requires " conformable partitions" [4] between two matrices

such that all submatrix products that will be used are defined. [5] Given an

that are compatible with the partitions of

can be performed blockwise, yielding

column partitions. The matrices in the resulting matrix

are calculated by multiplying:

Or, using the Einstein notation that implicitly sums over repeated indices:

If a matrix is partitioned into four blocks, it can be inverted blockwise as follows:

where A and D are square blocks of arbitrary size, and B and C are conformable with them for partitioning. Furthermore, A and the Schur complement of A in P: P/A = D − CA−1B must be invertible. [6]

Equivalently, by permuting the blocks:

If A and D are both invertible, then:

By the Weinstein–Aronszajn identity, one of the two matrices in the block-diagonal matrix is invertible exactly when the other is.

The formula for the determinant of a

-matrix above continues to hold, under appropriate further assumptions, for a matrix composed of four submatrices

. The easiest such formula, which can be proven using either the Leibniz formula or a factorization involving the Schur complement, is

is invertible (and similarly if

-matrix, this simplifies to

If the blocks are square matrices of the same size further formulas hold. For example, if

This formula has been generalized to matrices composed of more than

blocks, again under appropriate commutativity conditions among the individual blocks. [9]

, the following formula holds (even if

do not commute)[ citation needed]

For the determinant and trace, the following properties hold

The eigenvalues and eigenvectors of

are simply those of the

where Ak, Bk and Ck are square sub-matrices of the lower, main and upper diagonal respectively.

A block Toeplitz matrix A has the form

A special form of matrix transpose can also be defined for block matrices, where individual blocks are reordered but not transposed. Let

, the block transpose of

As with the conventional trace operator, the block transpose is a linear mapping such that

. However, in general the property

does not hold unless the blocks of

B and defined as

This operation generalizes naturally to arbitrary dimensioned arrays (provided that A and B have the same number of dimensions).

In linear algebra terms, the use of a block matrix corresponds to having a linear mapping thought of in terms of corresponding 'bunches' of basis vectors. That again matches the idea of having distinguished direct sum decompositions of the domain and range. It is always particularly significant if a block is the zero matrix; that carries the information that a summand maps into a sub-sum.

Given the interpretation via linear mappings and direct sums, there is a special type of block matrix that occurs for square matrices (the case m = n). For those we can assume an interpretation as an endomorphism of an n-dimensional space V; the block structure in which the bunching of rows and columns is the same is of importance because it corresponds to having a single direct sum decomposition on V (rather than two). In that case, for example, the diagonal blocks in the obvious sense are all square. This type of structure is required to describe the Jordan normal form.

This technique is used to cut down calculations of matrices, column-row expansions, and many computer science applications, including VLSI chip design. An example is the Strassen algorithm for fast matrix multiplication, as well as the Hamming(7,4) encoding for error detection and recovery in data transmissions.

The technique can also be used where the elements of the A,B,C, and D matrices do not all require the same field for their elements. For example, The matrix A can be over the field of complex numbers, while the matrix D can be over the field of real numbers. This can lead to valid operations involving the matrices, while simplifying the operations within one of the matrices. For example, if D has only real elements finding its inverse takes less calculations than if complex elements must be considered. But the reals is a subfield of the complex numbers (further it can be considered a projection), so the matrices operations can be well defined.