From Wikipedia
https://en.wikipedia.org/wiki/Block_and_tackle
System of two or more pulleys and a rope or cable 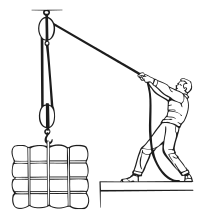 A block and tackle [1] [2] or only tackle [3] is a system of two or more pulleys with a rope or cable threaded between them, usually used to lift heavy loads.

The pulleys are assembled to form blocks and then blocks are paired so that one is fixed and one moves with the load. The rope is threaded through the pulleys to provide mechanical advantage that amplifies the force applied to the rope. [4]

Various ways of rigging a tackle. All these are "rove to disadvantage" [6] (see below).

A block is a set of pulleys or sheaves mounted on a single frame. An assembly of blocks with a rope threaded through the pulleys is called tackle. The process of threading ropes or cables through blocks is called "reeving", and a threaded block and tackle is said to have been "rove". [7] A block and tackle system amplifies the tension force in the rope to lift heavy loads. They are common on boats and sailing ships, where tasks are often performed manually, as well as on cranes and drilling rigs, where once rove, the tasks are performed by heavy equipment.

In the diagram shown here, the number of rope sections of the tackles shown is as follows:

Note that the gun tackle, double tackle and threefold purchase all have the same number of pulleys in both blocks (one, two and three, respectively) whereas the Luff tackle and Gyn tackle have mis-matched blocks with differing numbers of pulleys.

A gun tackle has a single pulley in both the fixed and moving blocks with 2 rope parts (n) supporting the load (FB) of 100 N. The mechanical advantage is 2, requiring a force of only 50 N to lift the load.

A block and tackle is characterized by the use of a single continuous rope to transmit a tension force around one or more pulleys to lift or move a load. Its mechanical advantage is the number of parts of the rope that act on the load. The mechanical advantage of a tackle dictates how much easier it is to haul or lift the load.

If frictional losses are neglected, the mechanical advantage of a block and tackle is equal to the number of parts in the line that either attach to or run through the moving blocks—in other words, the number of supporting rope sections.

An ideal block and tackle with a moving block supported by n rope sections has the mechanical advantage (MA),

where FA is the hauling (or input) force and FB is the load. 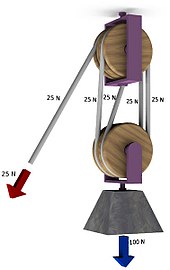 A double tackle has two pulleys in both the fixed and moving blocks with four rope parts (n) supporting the load (FB) of 100 N. The mechanical advantage is 4, requiring a force of only 25 N to lift the load.

The mechanical advantage of any tackle can be increased by interchanging the fixed and moving blocks so the rope is attached to the moving block and the rope is pulled in the direction of the lifted load. In this case the block and tackle is said to be "rove to advantage." [8]

Diagram 3 shows three rope parts supporting the load W, which means the tension in the rope is W/3. Thus, the mechanical advantage is three-to-one.

By adding a pulley to the fixed block of a gun tackle the direction of the pulling force is reversed though the mechanical advantage remains the same, Diagram 3a. This is an example of the Luff tackle.

The decision of which to use depends on pragmatic considerations for the total ergonomics of working with a particular situation. Reeving to advantage is the most efficient use of equipment and resources. For example, if the load is to be hauled parallel to the ground, reeving to advantage enables the pulling force to be in the direction of the load movement, allowing obstacles to be managed more easily.

Reeving to disadvantage adds an extra sheave to change the direction of the pulling line to a potentially more ergonomic direction, which increases friction losses without improving the velocity ratio. Situations in which reeving to disadvantage may be more desirable include lifting from a fixed point overhead--the additional pulley allows pulling downwards instead of upwards so that the weight of the lifter can offset the weight of the load, or allows pulling sideways, enabling multiple lifters to combine effort. 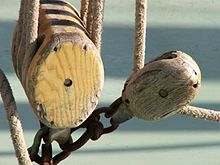 Wooden block on a sailing ship.

The formula used to find the effort required to raise a given weight using a block and fall:

is the force applied to the hauling part of the line (the input force),

is the weight of the load (the output force),

is the ideal mechanical advantage of the system (which is the same as the number of segments of line extending from the moving block), and

is the mechanical efficiency of the system (equal to one for an ideal frictionless system; a fraction less than one for real-world systems with energy losses due to friction and other causes). If

is the number of sheaves in the purchase, and there is a roughly

This approximation is more accurate for smaller values of

. [10] A more precise estimate of efficiency is possible by use of the sheave friction factor,

(which may be obtainable from the manufacturer or published tables [11]). The relevant equation is: [11]

The increased force produced by a tackle is offset by both the increased length of rope needed and the friction in the system. In order to raise a block and tackle with a mechanical advantage of 6 a distance of 1 metre, it is necessary to pull 6 metres of rope through the blocks. Frictional losses also mean there is a practical point at which the benefit of adding a further sheave is offset by the incremental increase in friction which would require additional force to be applied in order to lift the load. Too much friction may result in the tackle not allowing the load to be released easily, [notes 1] or by the reduction in force needed to move the load being judged insufficient because undue friction has to be overcome as well.

When installing a block on an existing line, it is often inconvenient at best to thread the rope through the block to be added. 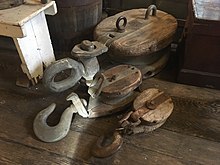 Three snatch blocks showing the ‘snatch’ in the closed, opened, and securely moused

Examples of use (in an arborocultural setting) include: tail minding/tending, and for setting a rigging point in the tree above the cut to take place - a positive rigging situation.

Examples of use (again, in relation to tree care) may include setting a block below the current cut, resulting in a 'negative' rigging situation, in which shock loads can be significant - especially if removing large sections of vertical stem.