Birds of prey or predatory birds, also known as raptors, are hypercarnivorous bird species that actively hunt and feed on other vertebrates (mainly mammals, reptiles and other smaller birds). In addition to speed and strength, these predators have keen eyesight for detecting prey from a distance or during flight, strong feet with sharp talons for grasping or killing prey, and powerful, curved beaks for tearing off flesh. [1] [2] [3] Although predatory birds primarily hunt live prey, many species (such as fish eagles, vultures and condors) also scavenge and eat carrion. [1]

Although the term "bird of prey" could theoretically be taken to include all birds that actively hunt and eat other animals, [3] ornithologists typically use the narrower definition followed in this page,[ citation needed] excluding piscivorous predators such as storks, herons, gulls, skuas, penguins and kingfishers nor primarily insectivorous birds such as songbirds or birds like shrikes. Some extinct predatory birds had talons similar to those of modern birds of prey, including mousebird relatives ( Sandcoleidae), [4] Messelasturidae and some Enantiornithes, [5] indicating possible convergent evolution.

The term raptor is derived from the Latin word rapio, meaning "to seize or take by force". [6] The common names for various birds of prey are based on structure, but many of the traditional names do not reflect the evolutionary relationships between the groups.

Variations in shape and size

Some names have not generalised, and refer to single species (or groups of closely related (sub)species), such as the merlin (Falco columbarius).

The taxonomy of Carl Linnaeus grouped birds (class Aves) into orders, genera, and species, with no formal ranks between genus and order. He placed all birds of prey into a single order, Accipitres, subdividing this into four genera: Vultur (vultures), Falco (eagles, hawks, falcons, etc.), Strix (owls), and Lanius (shrikes). This approach was followed by subsequent authors such as Gmelin, Latham and Turton. 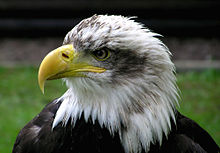 The order Accipitriformes is believed to have originated 44 million years ago when it split from the common ancestor of the secretarybird (Sagittarius serpentarius) and the accipitrid species. [10] The phylogeny of Accipitriformes is complex and difficult to unravel. Widespread paraphylies were observed in many phylogenetic studies. [11] [12] [13] [14] [15] More recent and detailed studies show similar results. [16] However, according to the findings of a 2014 study, the sister relationship between larger clades of Accipitriformes was well supported (e.g. relationship of Harpagus kites to buzzards and sea eagles and these latter two with Accipiter hawks are sister taxa of the clade containing Aquilinae and Harpiinae). [10]

The diurnal birds of prey are formally classified into six families of three different orders (Accipitriformes, Falconiformes and Cariamiformes).

These families (with the exception of Cariamidae) were traditionally grouped together in a single order Falconiformes but are now split into two orders, the Falconiformes and Accipitriformes. The Cathartidae are sometimes placed separately in an enlarged stork family, Ciconiiformes, and may be raised to an order of their own, Cathartiiformes.

The secretary bird and/or osprey are sometimes listed as subfamilies of Acciptridae: Sagittariinae and Pandioninae, respectively.

Australia's letter-winged kite is a member of the family Accipitridae, although it is a nocturnal bird.

The nocturnal birds of prey—the owls—are classified separately as members of two extant families of the order Strigiformes:

Below is a simplified phylogeny of Telluraves which is the clade where the birds of prey belong to along with passerines and several near-passerine lineages. [17] [18] [19] The orders in bold text are birds of prey orders; this is to show the polyphly of the group as well as their relationships to other birds. 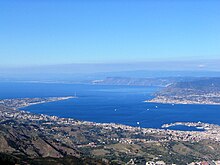 An obliged point of transit of the migration of the birds of prey is the bottleneck-shaped Strait of Messina, Sicily, here seen from Dinnammare mount, Peloritani.

The earliest event occurred nearly 14 to 12 million years ago. This result seems to be one of the oldest dates published so far in the case of birds of prey. [10] For example, a previous reconstruction of migratory behaviour in one Buteo clade [15] with a result of the origin of migration around 5 million years ago was also supported by that study.

Migratory species of raptors may have had a southern origin because it seems that all of the major lineages within Accipitridae had an origin in one of the biogeographic realms of the Southern Hemisphere. The appearance of migratory behaviour occurred in the tropics parallel with the range expansion of migratory species to temperate habitats. [10] Similar results of southern origin in other taxonomic groups can be found in the literature. [20] [21] [22]

A recent study discovered new connections between migration and the ecology, life history of raptors. A brief overview from abstract of the published paper shows that "clutch size and hunting strategies have been proved to be the most important variables in shaping distribution areas, and also the geographic dissimilarities may mask important relationships between life history traits and migratory behaviours. The West Palearctic-Afrotropical and the North-South American migratory systems are fundamentally different from the East Palearctic-Indomalayan system, owing to the presence versus absence of ecological barriers." [23] Maximum entropy modelling can help in answering the question: why species winters at one location while the others are elsewhere. Temperature and precipitation related factors differ in the limitation of species distributions. "This suggests that the migratory behaviours differ among the three main migratory routes for these species" [23] which may have important conservational consequences in the protection of migratory raptors. 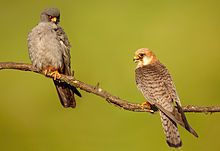 Birds of prey (raptors) are known to display patterns of sexual dimorphism. It is commonly believed that the dimorphisms found in raptors occur due to sexual selection or environmental factors. In general, hypotheses in favor of ecological factors being the cause for sexual dimorphism in raptors are rejected. This is because the ecological model is less parsimonious, meaning that its explanation is more complex than that of the sexual selection model. Additionally, ecological models are much harder to test because a great deal of data is required. [24]

Dimorphisms can also be the product of intrasexual selection between males and females. It appears that both sexes of the species play a role in the sexual dimorphism within raptors; females tend to compete with other females to find good places to nest and attract males, and males competing with other males for adequate hunting ground so they appear as the most healthy mate. [25] It has also been proposed that sexual dimorphism is merely the product of disruptive selection, and is merely a stepping stone in the process of speciation, especially if the traits that define gender are independent across a species. Sexual dimorphism can be viewed as something that can accelerate the rate of speciation. [26]

In non-predatory birds, males are typically larger than females. However, in birds of prey, the opposite is the case. For instance, the kestrel is a type of falcon in which males are the primary providers, and the females are responsible for nurturing the young. In this species, the smaller the kestrels are, the less food is needed and thus, they can survive in environments that are harsher. This is particularly true in the male kestrels. It has become more energetically favorable for male kestrels to remain smaller than their female counterparts because smaller males have an agility advantage when it comes to defending the nest and hunting. Larger females are favored because they can incubate larger numbers of offspring, while also being able to brood a larger clutch size. [27]

It is a long-standing belief that birds lack any sense of smell, but it has become clear that many birds do have functional olfactory systems. Despite this, most raptors are still considered to primarily rely on vision, with raptor vision being extensively studied. A 2020 review of the existing literature combining anatomical, genetic, and behavioural studies showed that, in general, raptors have functional olfactory systems that they are likely to use in a range of different contexts. [28]

Birds of prey have been historically persecuted both directly and indirectly. In the Danish Faeroe Islands, there were rewards Naebbetold (by royal decree from 1741) given in return for the bills of birds of prey shown by hunters. In Britain, kites and buzzards were seen as destroyers of game and killed, for instance in 1684-5 alone as many as 100 kites were killed. Rewards for their killing were also in force in the Netherlands from 1756. From 1705 to 1800, it has been estimated that 624087 birds of prey were killed in a part of Germany that included Hannover, Luneburg, Lauenburg and Bremen with 14125 claws deposited just in 1796–7. [29] Many species also develop lead poisoning after accidental consumption of lead shot when feeding on animals that had been shot by hunters. [30] Lead pellets from direct shooting that the birds have escaped from also cause reduced fitness and premature deaths. [31]

Some evidence supports the contention that the African crowned eagle occasionally views human children as prey, with a witness account of one attack (in which the victim, a seven-year-old boy, survived and the eagle was killed), [32] and the discovery of part of a human child skull in a nest. This would make it the only living bird known to prey on humans, although other birds such as ostriches and cassowaries have killed humans in self-defense and a lammergeier might have killed Aeschylus by accident. [33] Many stories of Brazilian Indians speak about children mauled by Uiruuetê, the Harpy Eagle in Tupi language.[ citation needed] Various large raptors like golden eagles are reported attacking human beings, [34] but its unclear if they intend to eat them or if they have ever been successful in killing one.

Some fossil evidence indicates large birds of prey occasionally preyed on prehistoric hominids. The Taung Child, an early human found in Africa, is believed to have been killed by an eagle-like bird similar to the crowned eagle. The extinct Haast's eagle may have preyed on humans in New Zealand, and this conclusion would be consistent with Maori folklore. Leptoptilos robustus [35] might have preyed on both Homo floresiensis and anatomically modern humans, and the Malagasy crowned eagle, teratorns, Woodward's eagle and Caracara major [36] are similar in size to the Haast's eagle, implying that they similarly could pose a threat to a human being.

Although not birds of prey, Australian magpies have injured bike riders and passersby alike by swooping at the back of their heads. [37] In an extreme case, one swooping caused a mother who was carrying her five-month-old baby to trip over and fall, leading to the baby's death from critical brain injuries in August 2021. [38]