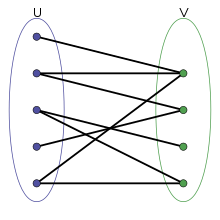 Example of a bipartite graph without cycles

In the mathematical field of graph theory, a bipartite graph (or bigraph) is a graph whose vertices can be divided into two disjoint and independent sets

, that is every edge connects a vertex in

are usually called the parts of the graph. Equivalently, a bipartite graph is a graph that does not contain any odd-length cycles. [1] [2]

may be thought of as a coloring of the graph with two colors: if one colors all nodes in

blue, and all nodes in

green, each edge has endpoints of differing colors, as is required in the graph coloring problem. [3] [4] In contrast, such a coloring is impossible in the case of a non-bipartite graph, such as a triangle: after one node is colored blue and another green, the third vertex of the triangle is connected to vertices of both colors, preventing it from being assigned either color.

to denote a bipartite graph whose partition has the parts

denoting the edges of the graph. If a bipartite graph is not connected, it may have more than one bipartition; [5] in this case, the

notation is helpful in specifying one particular bipartition that may be of importance in an application. If

, that is, if the two subsets have equal cardinality, then

is called a balanced bipartite graph. [3] If all vertices on the same side of the bipartition have the same degree, then

When modelling relations between two different classes of objects, bipartite graphs very often arise naturally. For instance, a graph of football players and clubs, with an edge between a player and a club if the player has played for that club, is a natural example of an affiliation network, a type of bipartite graph used in social network analysis. [6]

Another example where bipartite graphs appear naturally is in the ( NP-complete) railway optimization problem, in which the input is a schedule of trains and their stops, and the goal is to find a set of train stations as small as possible such that every train visits at least one of the chosen stations. This problem can be modeled as a dominating set problem in a bipartite graph that has a vertex for each train and each station and an edge for each pair of a station and a train that stops at that station. [7]

A third example is in the academic field of numismatics. Ancient coins are made using two positive impressions of the design (the obverse and reverse). The charts numismatists produce to represent the production of coins are bipartite graphs. [8]

More abstract examples include the following:

Bipartite graphs may be characterized in several different ways:

For a vertex, the number of adjacent vertices is called the degree of the vertex and is denoted

. The degree sum formula for a bipartite graph states that [22]

. For example, the complete bipartite graph K3,5 has degree sequence

The bipartite realization problem is the problem of finding a simple bipartite graph with the degree sequence being two given lists of natural numbers. (Trailing zeros may be ignored since they are trivially realized by adding an appropriate number of isolated vertices to the digraph.)

Relation to hypergraphs and directed graphs

The biadjacency matrix of a bipartite graph

that has a one for each pair of adjacent vertices and a zero for nonadjacent vertices. [23] Biadjacency matrices may be used to describe equivalences between bipartite graphs, hypergraphs, and directed graphs.

A hypergraph is a combinatorial structure that, like an undirected graph, has vertices and edges, but in which the edges may be arbitrary sets of vertices rather than having to have exactly two endpoints. A bipartite graph

A similar reinterpretation of adjacency matrices may be used to show a one-to-one correspondence between directed graphs (on a given number of labeled vertices, allowing self-loops) and balanced bipartite graphs, with the same number of vertices on both sides of the bipartition. For, the adjacency matrix of a directed graph with n vertices can be any (0,1) matrix of size

It is possible to test whether a graph is bipartite, and to return either a two-coloring (if it is bipartite) or an odd cycle (if it is not) in linear time, using depth-first search. The main idea is to assign to each vertex the color that differs from the color of its parent in the depth-first search forest, assigning colors in a preorder traversal of the depth-first-search forest. This will necessarily provide a two-coloring of the spanning forest consisting of the edges connecting vertices to their parents, but it may not properly color some of the non-forest edges. In a depth-first search forest, one of the two endpoints of every non-forest edge is an ancestor of the other endpoint, and when the depth first search discovers an edge of this type it should check that these two vertices have different colors. If they do not, then the path in the forest from ancestor to descendant, together with the miscolored edge, form an odd cycle, which is returned from the algorithm together with the result that the graph is not bipartite. However, if the algorithm terminates without detecting an odd cycle of this type, then every edge must be properly colored, and the algorithm returns the coloring together with the result that the graph is bipartite. [26]

Alternatively, a similar procedure may be used with breadth-first search in place of depth-first search. Again, each node is given the opposite color to its parent in the search forest, in breadth-first order. If, when a vertex is colored, there exists an edge connecting it to a previously-colored vertex with the same color, then this edge together with the paths in the breadth-first search forest connecting its two endpoints to their lowest common ancestor forms an odd cycle. If the algorithm terminates without finding an odd cycle in this way, then it must have found a proper coloring, and can safely conclude that the graph is bipartite. [27]

For the intersection graphs of

line segments or other simple shapes in the Euclidean plane, it is possible to test whether the graph is bipartite and return either a two-coloring or an odd cycle in time

, even though the graph itself may have up to 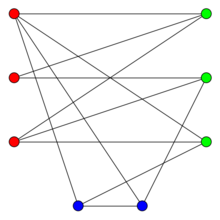 A graph with an odd cycle transversal of size 2: removing the two blue bottom vertices leaves a bipartite graph.

Odd cycle transversal is an NP-complete algorithmic problem that asks, given a graph G = (V,E) and a number k, whether there exists a set of k vertices whose removal from G would cause the resulting graph to be bipartite. [29] The problem is fixed-parameter tractable, meaning that there is an algorithm whose running time can be bounded by a polynomial function of the size of the graph multiplied by a larger function of k. [30] The name odd cycle transversal comes from the fact that a graph is bipartite if and only if it has no odd cycles. Hence, to delete vertices from a graph in order to obtain a bipartite graph, one needs to "hit all odd cycle", or find a so-called odd cycle transversal set. In the illustration, every odd cycle in the graph contains the blue (the bottommost) vertices, so removing those vertices kills all odd cycles and leaves a bipartite graph.

The edge bipartization problem is the algorithmic problem of deleting as few edges as possible to make a graph bipartite and is also an important problem in graph modification algorithmics. This problem is also fixed-parameter tractable, and can be solved in time

A matching in a graph is a subset of its edges, no two of which share an endpoint. Polynomial time algorithms are known for many algorithmic problems on matchings, including maximum matching (finding a matching that uses as many edges as possible), maximum weight matching, and stable marriage. [32] In many cases, matching problems are simpler to solve on bipartite graphs than on non-bipartite graphs, [33] and many matching algorithms such as the Hopcroft–Karp algorithm for maximum cardinality matching [34] work correctly only on bipartite inputs.

As a simple example, suppose that a set

of people are all seeking jobs from among a set of

jobs, with not all people suitable for all jobs. This situation can be modeled as a bipartite graph

where an edge connects each job-seeker with each suitable job. [35] A perfect matching describes a way of simultaneously satisfying all job-seekers and filling all jobs; Hall's marriage theorem provides a characterization of the bipartite graphs which allow perfect matchings. The National Resident Matching Program applies graph matching methods to solve this problem for U.S. medical student job-seekers and hospital residency jobs. [36]

The Dulmage–Mendelsohn decomposition is a structural decomposition of bipartite graphs that is useful in finding maximum matchings. [37]

Bipartite graphs are extensively used in modern coding theory, especially to decode codewords received from the channel. Factor graphs and Tanner graphs are examples of this. A Tanner graph is a bipartite graph in which the vertices on one side of the bipartition represent digits of a codeword, and the vertices on the other side represent combinations of digits that are expected to sum to zero in a codeword without errors. [38] A factor graph is a closely related belief network used for probabilistic decoding of LDPC and turbo codes. [39]

In computer science, a Petri net is a mathematical modeling tool used in analysis and simulations of concurrent systems. A system is modeled as a bipartite directed graph with two sets of nodes: A set of "place" nodes that contain resources, and a set of "event" nodes which generate and/or consume resources. There are additional constraints on the nodes and edges that constrain the behavior of the system. Petri nets utilize the properties of bipartite directed graphs and other properties to allow mathematical proofs of the behavior of systems while also allowing easy implementation of simulations of the system. [40]

In projective geometry, Levi graphs are a form of bipartite graph used to model the incidences between points and lines in a configuration. Corresponding to the geometric property of points and lines that every two lines meet in at most one point and every two points be connected with a single line, Levi graphs necessarily do not contain any cycles of length four, so their girth must be six or more. [41]