From Wikipedia
https://en.wikipedia.org/wiki/Biological_life_cycle
Series of stages of an organism 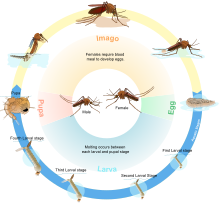 Life cycle of a mosquito. An adult female mosquito lays eggs which develop through several stages to adulthood. Reproduction completes and perpetuates the cycle.

In biology, a biological life cycle (or just life cycle or lifecycle when the biological context is clear) is a series of changes in form that an organism undergoes, returning to the starting state. "The concept is closely related to those of the life history, development and ontogeny, but differs from them in stressing renewal." [1] [2] Transitions of form may involve growth, asexual reproduction, or sexual reproduction.

In some organisms, different "generations" of the species succeed each other during the life cycle. For plants and many algae, there are two multicellular stages, and the life cycle is referred to as alternation of generations. The term life history is often used, particularly for organisms such as the red algae which have three multicellular stages (or more), rather than two. [3]

Life cycles that include sexual reproduction involve alternating haploid (n) and diploid (2n) stages, i.e., a change of ploidy is involved. To return from a diploid stage to a haploid stage, meiosis must occur. In regard to changes of ploidy, there are three types of cycles:

The study of reproduction and development in organisms was carried out by many botanists and zoologists.

Wilhelm Hofmeister demonstrated that alternation of generations is a feature that unites plants, and published this result in 1851 (see plant sexuality).

Some terms (haplobiont and diplobiont) used for the description of life cycles were proposed initially for algae by Nils Svedelius, and then became used for other organisms. [4] [5] Other terms (autogamy and gamontogamy) used in protist life cycles were introduced by Karl Gottlieb Grell. [6] The description of the complex life cycles of various organisms contributed to the disproof of the ideas of spontaneous generation in the 1840s and 1850s. [7] 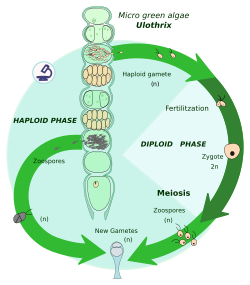 A zygotic meiosis is a meiosis of a zygote immediately after karyogamy, which is the fusion of two cell nuclei. This way, the organism ends its diploid phase and produces several haploid cells. These cells divide mitotically to form either larger, multicellular individuals, or more haploid cells. Two opposite types of gametes (e.g., male and female) from these individuals or cells fuse to become a zygote.

In the whole cycle, zygotes are the only diploid cell; mitosis occurs only in the haploid phase.

The individuals or cells as a result of mitosis are haplonts, hence this life cycle is also called haplontic life cycle. Haplonts are: 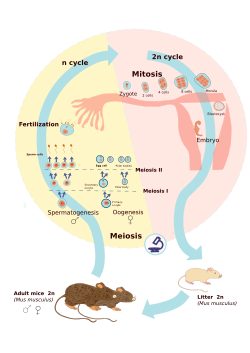 In the whole cycle, gametes are usually the only haploid cells, and mitosis usually occurs only in the diploid phase.

The diploid multicellular individual is a diplont, hence a gametic meiosis is also called a diplontic life cycle. Diplonts are: 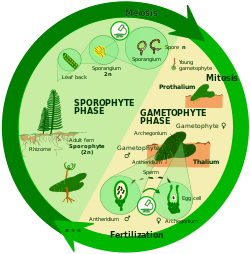 In sporic meiosis (also commonly known as intermediary meiosis), the zygote divides mitotically to produce a multicellular diploid sporophyte. The sporophyte creates spores via meiosis which also then divide mitotically producing haploid individuals called gametophytes. The gametophytes produce gametes via mitosis. In some plants the gametophyte is not only small-sized but also short-lived; in other plants and many algae, the gametophyte is the "dominant" stage of the life cycle.[ citation needed]

Some animals have a sex-determination system called haplodiploid, but this is not related to the haplodiplontic life cycle.

Some red algae (such as Bonnemaisonia [17] and Lemanea) and green algae (such as Prasiola) have vegetative meiosis, also called somatic meiosis, which is a rare phenomenon. [18] Vegetative meiosis can occur in haplodiplontic and also in diplontic life cycles. The gametophytes remain attached to and part of the sporophyte. Vegetative (non-reproductive) diploid cells undergo meiosis, generating vegetative haploid cells. These undergo many mitosis, and produces gametes.

A different phenomenon, called vegetative diploidization, a type of apomixis, occurs in some brown algae (e.g., Elachista stellaris). [19] Cells in a haploid part of the plant spontaneously duplicate their chromosomes to produce diploid tissue.

Parasites depend on the exploitation of one or more hosts. Those that must infect more than one host species to complete their life cycles are said to have complex or indirect life cycles. Dirofilaria immitis, or the heartworm, has an indirect life cycle, for example. The microfilariae must first be ingested by a female mosquito, where it develops into the infective larval stage. The mosquito then bites an animal and transmits the infective larvae into the animal, where they migrate to the pulmonary artery and mature into adults. [20]

Those parasites that infect a single species have direct life cycles. An example of a parasite with a direct life cycle is Ancylostoma caninum, or the canine hookworm. They develop to the infective larval stage in the environment, then penetrate the skin of the dog directly and mature to adults in the small intestine. [21]

A host in which parasites reproduce sexually is known as the definitive, final or primary host. In intermediate hosts, parasites either do not reproduce or do so asexually, but the parasite always develops to a new stage in this type of host. In some cases a parasite will infect a host, but not undergo any development, these hosts are known as paratenic [22] or transport hosts. The paratenic host can be useful in raising the chance that the parasite will be transmitted to the definitive host. For example, the cat lungworm ( Aelurostrongylus abstrusus) uses a slug or snail as an intermediate host; the first stage larva enters the mollusk and develops to the third stage larva, which is infectious to the definitive host—the cat. If a mouse eats the slug, the third stage larva will enter the mouse's tissues, but will not undergo any development.[ citation needed] 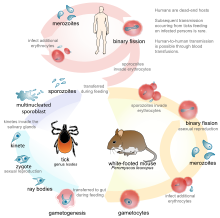 Life cycle of the apicomplexan, single-celled parasite Babesia, including infection of humans

Individual organisms participating in a biological life cycle ordinarily age and die, while cells from these organisms that connect successive life cycle generations (germ line cells and their descendants) are potentially immortal. The basis for this difference is a fundamental problem in biology. The Russian biologist and historian Zhores A. Medvedev [27] considered that the accuracy of genome replicative and other synthetic systems alone cannot explain the immortality of germ lines. Rather Medvedev thought that known features of the biochemistry and genetics of sexual reproduction indicate the presence of unique information maintenance and restoration processes at the gametogenesis stage of the biological life cycle. In particular, Medvedev considered that the most important opportunities for information maintenance of germ cells are created by recombination during meiosis and DNA repair; he saw these as processes within the germ line cells that were capable of restoring the integrity of DNA and chromosomes from the types of damage that cause irreversible ageing in non-germ line cells, e.g. somatic cells. [27]

The ancestry of each present day cell presumably traces back, in an unbroken lineage for over 3 billion years to the origin of life. It is not actually cells that are immortal but multi-generational cell lineages. [28] The immortality of a cell lineage depends on the maintenance of cell division potential. This potential may be lost in any particular lineage because of cell damage, terminal differentiation as occurs in nerve cells, or programmed cell death ( apoptosis) during development. Maintenance of cell division potential of the biological life cycle over successive generations depends on the avoidance and the accurate repair of cellular damage, particularly DNA damage. In sexual organisms, continuity of the germline over successive cell cycle generations depends on the effectiveness of processes for avoiding DNA damage and repairing those DNA damages that do occur. Sexual processes in eukaryotes provide an opportunity for effective repair of DNA damages in the germ line by homologous recombination. [28] [29]