From Wikipedia
https://en.wikipedia.org/wiki/Biodiversity_hotspot
Biogeographic region with significant levels of biodiversity that is threatened with destruction

A biodiversity hotspot is a biogeographic region with significant levels of biodiversity that is threatened by human habitation. [1] [2]

Norman Myers wrote about the concept in two articles in The Environmentalist in 1988 [3] and 1990, [4] after which the concept was revised following thorough analysis by Myers and others into “Hotspots: Earth’s Biologically Richest and Most Endangered Terrestrial Ecoregions” [5] and a paper published in the journal Nature, both in 2000. [6]

To qualify as a biodiversity hotspot on Myers' 2000 edition of the hotspot map, a region must meet two strict criteria: it must contain at least 1,500 species of vascular plants (more than 0.5% of the world's total) as endemics, and it has to have lost at least 70% of its primary vegetation. [6] Globally, 36 zones qualify under this definition. [7] These sites support nearly 60% of the world's plant, bird, mammal, reptile, and amphibian species, with a high share of those species as endemics. Some of these hotspots support up to 15,000 endemic plant species, and some have lost up to 95% of their natural habitat. [7]

Biodiversity hotspots host their diverse ecosystems on just 2.4% of the planet's surface. [2] Ten hotspots were originally identified by Myer; [1] the current 36 used to cover more than 15.7% of all the land but have lost around 85% of their area. [8] This loss of habitat is why approximately 60% of the world's terrestrial life lives on only 2.4% of the land surface area. Caribbean Islands like Haiti and Jamaica are facing serious pressures on the populations of endemic plants and vertebrates as a result of rapid deforestation. Other areas include the Tropical Andes, Philippines, Mesoamerica, and Sundaland, which, under the current levels at which deforestation is occurring, will likely lose most of their plant and vertebrate species. [9] 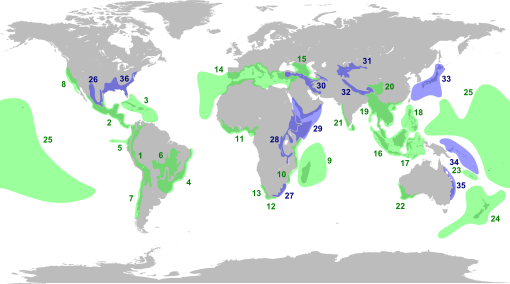 A recent series of papers has pointed out that biodiversity hotspots (and many other priority region sets) do not address the concept of cost. [19] The purpose of biodiversity hotspots is not simply to identify regions that are of high biodiversity value, but to prioritize conservation spending. The regions identified include some in the developed world (e.g. the California Floristic Province), alongside others in the developing world (e.g. Madagascar). The cost of land is likely to vary between these regions by an order of magnitude or more, but the biodiversity hotspot designations do not consider the conservation importance of this difference. However, the available resources for conservation also tend to vary in this way.