From Wikipedia
https://en.wikipedia.org/wiki/Beam_lead_technology
Technology used to deposit metal beams onto integrated circuits for connecting them 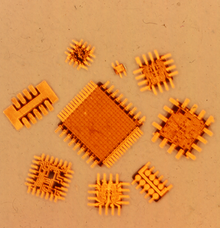 In the early 1960s, M.P. Lepselter [2] [3] developed the techniques for fabricating a structure consisting of electroforming an array of thick, self-supporting gold patterns on a thin film Ti- Pt Au base, hence the name "beams", deposited on the surface of a silicon wafer. The excess semiconductor from under the beams was removed, thereby separating the individual devices and leaving them with self-supporting beam leads or internal chiplets cantilevered beyond the semiconductor. The contacts served as electrical leads in addition to also serving the purpose of structural support for the devices.

This technology, also known as air-bridge technology, has established itself for its unsurpassed reliability in high-frequency silicon switching transistors and ultra-high-speed integrated circuits for telecommunications and missile systems. The beam lead devices, produced by the hundreds of millions, became the first example of a commercial microelectromechanical structure ( MEMS).