From Wikipedia
https://en.wikipedia.org/wiki/Baltic_region
Geographical region in North-eastern Europe
Not to be confused with Balkans. 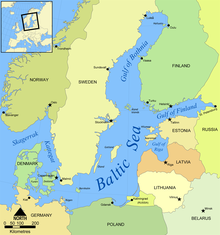 The terms Baltic Sea Region, Baltic Rim countries (or simply the Baltic Rim), and the Baltic Sea countries/states refer to slightly different combinations of countries in the general area surrounding the Baltic Sea, mainly in Northern Europe. The term " Baltic states" refers specifically to one such grouping.

The first to name it the Baltic Sea ( Latin: Mare Balticum) was 11th century German chronicler Adam of Bremen.

Depending on the context the Baltic Sea Region might stand for: