From Wikipedia
https://en.wikipedia.org/wiki/Baltic_languages
Balto-Slavic languages of the Indo-European language family
Not to be confused with Baltic Finnic languages or Balti language.

Scholars usually regard them as a single subgroup divided into two branches: Western Baltic (containing only extinct languages) and Eastern Baltic (containing at least two living languages, Lithuanian, Latvian, and by some counts including Latgalian and Samogitian as separate languages rather than dialects of the two aforementioned languages). The range of the Eastern Baltic linguistic influence once possibly reached as far as the Ural Mountains, but this hypothesis has been questioned. [3] [4] [5]

Old Prussian, a Western Baltic language that became extinct in the 18th century, has possibly retained the greatest number of properties from Proto-Baltic. [6]

Although related, the Lithuanian, Latvian and, particularly, Old Prussian lexicons differ substantially from one another, and as such they are/were not mutually intelligible. Relatively low mutual interaction for neighbouring languages historically led to gradual erosion of mutual intelligibility; development of their respective linguistic innovations that did not exist in shared Proto-Baltic and as well as substantial number of false friends and various uses and sources of loanwords from their surrounding languages are considered the major reasons for poor mutual intelligibility today.

Within Indo-European, the Baltic languages are generally classified as forming a single family with two branches: Eastern and Western Baltic. However, these two branches are sometimes classified as independent branches of Balto-Slavic itself. [7]

It is believed that the Baltic languages are among the most conservative of the currently remaining Indo-European languages, [9] [10] despite their late attestation.

Although the Baltic Aesti tribe was mentioned by ancient historians such as Tacitus as early as 98 CE, [11] the first attestation of a Baltic language was c. 1369, in a Basel epigram of two lines written in Old Prussian. Lithuanian was first attested in a printed book, which is a Catechism by Martynas Mažvydas published in 1547. Latvian appeared in a printed Catechism in 1585. [12]

One reason for the late attestation is that the Baltic peoples resisted Christianization longer than any other Europeans, which delayed the introduction of writing and isolated their languages from outside influence.[ citation needed]

With the establishment of a German state in Prussia, and the mass influx of Germanic (and to a lesser degree Slavic-speaking) settlers, the Prussians began to be assimilated, and by the end of the 17th century, the Prussian language had become extinct.

After the Partitions of Poland, most of the Baltic lands were under the rule of the Russian Empire, where the native languages or alphabets were sometimes prohibited from being written down or used publicly in a Russification effort (see Lithuanian press ban for the ban in force from 1864 to 1904). [13] 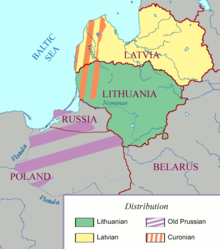 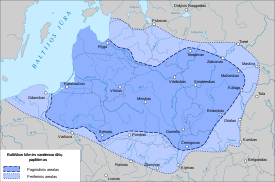 Map of the area of distribution of Baltic hydronyms.

Speakers of modern Baltic languages are generally concentrated within the borders of Lithuania and Latvia, and in emigrant communities in the United States, Canada, Australia and the countries within the former borders of the Soviet Union.

Historically the languages were spoken over a larger area: west to the mouth of the Vistula river in present-day Poland, at least as far east as the Dniepr river in present-day Belarus, perhaps even to Moscow, and perhaps as far south as Kyiv. Key evidence of Baltic language presence in these regions is found in hydronyms (names of bodies of water) that are characteristically Baltic. [14] [15] [16] [17] The use of hydronyms is generally accepted to determine the extent of a culture's influence, but not the date of such influence. [18]

The eventual expansion of the use of Slavic languages in the south and east, and Germanic languages in the west, reduced the geographic distribution of Baltic languages to a fraction of the area that they formerly covered. [19] [20] [21] The Russian geneticist Oleg Balanovsky speculated that there is a predominance of the assimilated pre-Slavic substrate in the genetics of East and West Slavic populations, according to him the common genetic structure which contrasts East Slavs and Balts from other populations may suggest that the pre-Slavic substrate of the East Slavs consists most significantly of Baltic-speakers, which predated the Slavs in the cultures of the Eurasian steppe according to archaeological references he cites. [22]

Though Estonia is geopolitically included among the Baltic states due to its location, Estonian is a Finnic language and is not related to the Baltic languages, which are Indo-European.

The Mordvinic languages, spoken mainly along western tributaries of the Volga, show several dozen loanwords from one or more Baltic languages. These may have been mediated by contacts with the Eastern Balts along the river Oka. [23] In regards to the same geographical location, Asko Parpola, in a 2013 article, suggested that the Baltic presence in this area, dated to c. 200–600 CE, is due to an "elite superstratum". [24] However, linguist Petri Kallio [ nn] argued that the Volga-Oka is a secondary Baltic-speaking area, expanding from East Baltic, due to a large number of Baltic loanwords in Finnic and Saami. [25]

Finnish scholars also indicate that Latvian had extensive contacts with Livonian, [26] and, to a lesser extent, to Estonian and South Estonian. [27]

The epigram of Basel – oldest known inscription in Prussian language and Baltic language in general, middle of 14th c

These scholars' theses do not contradict the close relationship between Baltic and Slavic languages closeness and from a historical perspective specify the Baltic-Slavic languages evolution.[ clarification needed] [36] [37]

Finally, there are a minority of scholars who argue that Baltic descended directly from Proto-Indo-European, without an intermediate common Balto-Slavic stage. They argue that the many similarities and shared innovations between Baltic and Slavic are due to several millennia of contact between the groups, rather than shared heritage. [38]

Place of Baltic languages according to Wolfgang P. Schmid, 1977.

The Baltic-speaking peoples likely encompassed an area in eastern Europe much larger than their modern range: as in the case of the Celtic languages of western Europe, they were reduced by invasion, extermination and assimilation. Studies in comparative linguistics point to genetic relationship between the languages of the Baltic family and the following extinct languages:

The Baltic classification of Dacian and Thracian has been proposed by the Lithuanian scientist Jonas Basanavičius, who insisted this is the most important work of his life and listed 600 identical words of Balts and Thracians. [46] [47] His theory included Phrygian in the related group, but this did not find support and was disapproved among other authors, such as Ivan Duridanov, whose own analysis found Phrygian completely lacking parallels in either Thracian or Baltic languages. [48]

The Bulgarian linguist Ivan Duridanov, who improved the most extensive list of toponyms, in his first publication claimed that Thracian is genetically linked to the Baltic languages [49] and in the next one he made the following classification:

"The Thracian language formed a close group with the Baltic, the Dacian and the " Pelasgian" languages. More distant were its relations with the other Indo-European languages, and especially with Greek, the Italic and Celtic languages, which exhibit only isolated phonetic similarities with Thracian; the Tokharian and the Hittite were also distant. " [48]

Of about 200 reconstructed Thracian words by Duridanov most cognates (138) appear in the Baltic languages, mostly in Lithuanian, followed by Germanic (61), Indo-Aryan (41), Greek (36), Bulgarian (23), Latin (10) and Albanian (8). The cognates of the reconstructed Dacian words in his publication are found mostly in the Baltic languages, followed by Albanian. Parallels have enabled linguists, using the techniques of comparative linguistics, to decipher the meanings of several Dacian and Thracian placenames with, they claim, a high degree of probability. Of 74 Dacian placenames attested in primary sources and considered by Duridanov, a total of 62 have Baltic cognates, most of which were rated "certain" by Duridanov. [50] For a big number of 300 Thracian geographic names most parallels were found between Thracian and Baltic geographic names in the study of Duridanov. [48] [51] [48] According to him the most important impression make the geographic cognates of Baltic and Thracian

"the similarity of these parallels stretching frequently on the main element and the suffix simultaneously, which makes a strong impression". [51] [49]