In contrast to the scarcity of sources in Egyptian mathematics, knowledge of Babylonian mathematics is derived from some 400 clay tablets unearthed since the 1850s. Written in Cuneiform script, tablets were inscribed while the clay was moist, and baked hard in an oven or by the heat of the sun. The majority of recovered clay tablets date from 1800 to 1600 BC, and cover topics that include fractions, algebra, quadratic and cubic equations and the Pythagorean theorem. The Babylonian tablet YBC 7289 gives an approximation to

"Babylonian mathematics" is perhaps an unhelpful term since the earliest suggested origins date to the use of accounting devices, such as bullae and tokens, in the 5th millennium BC. [9]

The Babylonian system of mathematics was a sexagesimal (base 60) numeral system. From this we derive the modern-day usage of 60 seconds in a minute, 60 minutes in an hour, and 360 degrees in a circle. [10] The Babylonians were able to make great advances in mathematics for two reasons. Firstly, the number 60 is a superior highly composite number, having factors of 1, 2, 3, 4, 5, 6, 10, 12, 15, 20, 30, 60 (including those that are themselves composite), facilitating calculations with fractions. Additionally, unlike the Egyptians and Romans, the Babylonians had a true place-value system, where digits written in the left column represented larger values (much as, in our base ten system, 734 = 7×100 + 3×10 + 4×1). [11]

The ancient Sumerians of Mesopotamia developed a complex system of metrology from 3000 BC. From 2600 BC onwards, the Sumerians wrote multiplication tables on clay tablets and dealt with geometrical exercises and division problems. The earliest traces of the Babylonian numerals also date back to this period. [12] 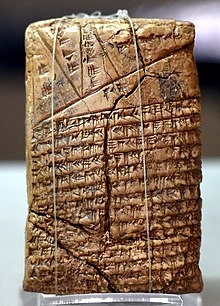 The Babylonians did not have an algorithm for long division. [13] Instead they based their method on the fact that:

together with a table of reciprocals. Numbers whose only prime factors are 2, 3 or 5 (known as 5- smooth or regular numbers) have finite reciprocals in sexagesimal notation, and tables with extensive lists of these reciprocals have been found.

Reciprocals such as 1/7, 1/11, 1/13, etc. do not have finite representations in sexagesimal notation. To compute 1/13 or to divide a number by 13 the Babylonians would use an approximation such as:

As well as arithmetical calculations, Babylonian mathematicians also developed algebraic methods of solving equations. Once again, these were based on pre-calculated tables.

where b and c were not necessarily integers, but c was always positive. They knew that a solution to this form of equation is:[ citation needed]

and they found square roots efficiently using division and averaging. [16] They always used the positive root because this made sense when solving "real" problems[ citation needed]. Problems of this type included finding the dimensions of a rectangle given its area and the amount by which the length exceeds the width.

Tables of values of n3 + n2 were used to solve certain cubic equations. For example, consider the equation:

Multiplying the equation by a2 and dividing by b3 gives:

which could now be solved by looking up the n3 + n2 table to find the value closest to the right hand side. The Babylonians accomplished this without algebraic notation, showing a remarkable depth of understanding. However, they did not have a method for solving the general cubic equation.

Babylonians modeled exponential growth, constrained growth (via a form of sigmoid functions), and doubling time, the latter in the context of interest on loans.

. The triples are too many and too large to have been obtained by brute force.

Much has been written on the subject, including some speculation (perhaps anachronistic) as to whether the tablet could have served as an early trigonometrical table. Care must be exercised to see the tablet in terms of methods familiar or accessible to scribes at the time.

[...] the question "how was the tablet calculated?" does not have to have the same answer as the question "what problems does the tablet set?" The first can be answered most satisfactorily by reciprocal pairs, as first suggested half a century ago, and the second by some sort of right-triangle problems.

Babylonians knew the common rules for measuring volumes and areas. They measured the circumference of a circle as three times the diameter and the area as one-twelfth the square of the circumference, which would be correct if π is estimated as 3. They were aware that this was an approximation, and one Old Babylonian mathematical tablet excavated near Susa in 1936 (dated to between the 19th and 17th centuries BCE) gives a better approximation of π as 25/8 = 3.125, about 0.5 percent below the exact value. [19] The volume of a cylinder was taken as the product of the base and the height, however, the volume of the frustum of a cone or a square pyramid was incorrectly taken as the product of the height and half the sum of the bases. The Pythagorean theorem was also known to the Babylonians. [20] [21] [22]

The "Babylonian mile" was a measure of distance equal to about 11.3 km (or about seven modern miles). This measurement for distances eventually was converted to a "time-mile" used for measuring the travel of the Sun, therefore, representing time. [23]

The ancient Babylonians had known of theorems concerning the ratios of the sides of similar triangles for many centuries, but they lacked the concept of an angle measure and consequently, studied the sides of triangles instead. [24]

The Babylonian astronomers kept detailed records of the rising and setting of stars, the motion of the planets, and the solar and lunar eclipses, all of which required familiarity with angular distances measured on the celestial sphere. [25]

They also used a form of Fourier analysis to compute ephemeris (tables of astronomical positions), which was discovered in the 1950s by Otto Neugebauer. [26] [27] [28] [29] To make calculations of the movements of celestial bodies, the Babylonians used basic arithmetic and a coordinate system based on the ecliptic, the part of the heavens that the sun and planets travel through.

Tablets kept in the British Museum provide evidence that the Babylonians even went so far as to have a concept of objects in an abstract mathematical space. The tablets date from between 350 and 50 B.C.E., revealing that the Babylonians understood and used geometry even earlier than previously thought. The Babylonians used a method for estimating the area under a curve by drawing a trapezoid underneath, a technique previously believed to have originated in 14th century Europe. This method of estimation allowed them to, for example, find the distance Jupiter had traveled in a certain amount of time. [30]