BBC Four is a British free-to-air television channel owned and operated by the BBC. It was launched on 2 March 2002, [1] and shows a wide variety of programmes including arts, documentaries, music, international film and drama, and current affairs. [2] It is required by its licence to air at least 100 hours of new arts and music programmes, 110 hours of new factual programmes and to premiere 20 foreign films each year. [3] [4] It broadcasts daily from 7:00pm to around 4:00am, timesharing with CBeebies (which starts at 6:00am). [5] 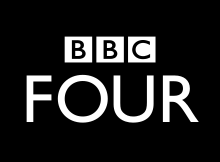 BBC Four launched on 2 March 2002 at 7:00 pm GMT, having been delayed from the original planned 2001 launch. BBC Four began originally as a late schedule to BBC Two, before it received its own channel, along with BBC Three. Curiously, BBC Four had to launch before BBC Three as a result of the government delaying approval plans. The channel replaced BBC Knowledge, an educational and cultural channel which had undergone many changes throughout its lifetime; in its final format it carried a schedule of documentaries and art programming, essentially a test of the new BBC Four schedule. BBC Four would rebrand this channel, and bring it into line with the well recognised BBC One and Two brands at the same time. Planning for the new channel, along with the new BBC Three, had been in progress since October 2000; however, the incumbent government delayed approving the new BBC digital plans. The BBC Four plans were approved earlier, and as a result launched before BBC Three.

BBC Four was different from the old BBC Knowledge: the channel would be more heavily promoted with more new and original programming and the channel would not be broadcast 24 hours a day. This was because on the Freeview digital terrestrial platform, BBC Four is broadcast in a statistically multiplexed stream in Multiplex B that timeshares with the CBeebies channel (which is on air from 06:00 until 19:00). As a result, BBC Four broadcasts from 19:00 to around 04:00 each night, with an hour's down-time and promotions for CBeebies before the start of that channel's schedule.

On 17 August 2018, BBC Four announced BBC 4.1, a special two nights of programming which would revolve around artificial intelligence (AI) selecting the programmes broadcast on the channel, based on "what BBC Four audiences might like, based on the channel's previous schedules and programme attributes." It would then "[rank] programmes it thought were most relevant [to what BBC Four viewers would like]." [8] The programming was aired on the nights of 4 and 5 September 2018. [9] This included a few special programmes about AI, [10] such as "Made by Machine: When AI Met The Archive", which documented how the AI works, [8] and "The Joy of AI", where "the emergence of machine learning" is discussed, as well as "why [AI] shouldn't spook us". [11] [12]

Due to the launch of BBC Scotland on 24 February 2019, BBC Four has been on a higher Freeview EPG number in Scotland than elsewhere, moving to 82 to make room for BBC Scotland. Following eventual closures, it moved to channel 75 there, and later to channel 68, and eventually channel 55. [14] On 4 November 2020, due to Ofcom proposals regarding certain PSB channels requiring greater prominence on each UK TV provider's channel listing, BBC Four moved to channel 24 in Scotland, while every channel from that number (ITV4) to channel 54 (5SELECT) moved up one place. [15]

In May 2020, the BBC submitted its annual general plan for 2020–21, which included a proposal for BBC Two to supplant BBC Four as its main outlet for specialist programmes. Under the plan, BBC Four would cease originating new programmes, and become a service showcasing the BBC's "rich archive". The plan also included the possibility of the BBC expanding BBC Four into a global brand, to "[take] our strengths in specialist factual to the world stage." [16] [17] [18]

On 9 April 2021, the day that Prince Philip, Duke of Edinburgh died, BBC Four was suspended for a whole day so the BBC could continue coverage of the Duke's death across its television, radio and online services. The next day (10 April) BBC Four resumed airing at the normal time of 7:00 pm. [19]

On 26 May 2022, the BBC announced plans to discontinue BBC Four as a broadcast channel within "the next few years", as part of plans to streamline and modify services to create a "digital-first" BBC. [20] [21] [22]

Channel Editors of BBC Four have been:

On 20 January 2016, Kim Shillinglaw announced that she had decided to leave the BBC as the Controller of BBC Two & BBC Four. As a result of the reorganisation, the post of BBC Two and Four control had closed after her departure later that year. [29]

On 16 July 2013, the BBC announced that a high-definition (HD) simulcast of BBC Four would be launched by early 2014. [30] The channel launched on 10 December 2013 at 18:58 GMT, and rolled out nationwide up to June 2014 (as did BBC News HD and CBeebies HD). [31] The channel broadcasts on the BBC's new HD multiplex on Freeview and shares its stream with CBeebies HD as they both air at different times. Prior to launch, the majority of BBC Four's HD output was broadcast on the BBC HD channel before its closure on 26 March 2013. In 2017 BBC Four HD along with CBBC HD and CBeebies HD launched in Ireland.

Main article: List of television programmes broadcast by the BBC

BBC Four's primary role is to reflect a range of UK and international arts, music and culture. It should provide an ambitious range of innovative, high quality programming that is intellectually and culturally enriching, taking an expert and in-depth approach to a wide range of subjects. 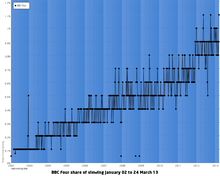 The first evening's BBC Four programmes were simulcast on BBC Two, [1] with the first programme being The Man Who Destroyed Everything, a documentary about conceptual artist Michael Landy and his installation Break Down. [32] BBC Four was also notable for first showing Larry David's Seinfeld follow-up, Curb Your Enthusiasm, [33] Armando Iannucci's cutting political satire, The Thick of It, The Chaser's War on Everything, Flight of the Conchords, Mad Men and Danish thriller The Killing.

The channel broadcasts a mixture of art and science documentaries, vintage drama (including many rare black-and-white programmes), and non-English-language productions such as films from the Artificial Eye catalogue, the French thriller Spiral and the Swedish detective series Wallander. [34] BBC Four further supports foreign-language films with its annual World Cinema Award which has been running since 2004.

Until the middle of 2020, BBC Four broadcast a global news bulletin on weekdays at 19:00 which most recently was a simulcast of Beyond 100 Days Monday–Thursday and an edition of World News Today on Fridays which was produced by BBC World News. This replaced The World and BBC Four News which aired in the slot from the launch of the channel. As of autumn 2020, BBC Four no longer broadcasts a news bulletin.

It screens a number of documentaries such as The Century of the Self and The Trials of Henry Kissinger. The channel is also home to many political travel shows such as Holidays in the Axis of Evil which features investigative journalism.

Drama has given the channel some of its most popular programmes, with The Alan Clark Diaries (2003) and Kenneth Williams: Fantabulosa! (2006) being among the highest rated, with over 800,000 viewers. The highly acclaimed Hattie, broadcast in 2011, holds the record for BBC4's best ever consolidated ratings of 2m / 8%. [35] Before that The Curse of Steptoe brought the channel its highest audience figures, estimated as 1.41 million viewers, a 7% share of multichannel audiences between 21:00 and 22:05, based on overnight returns. [36] The official audience figures for the broadcast, including time-shifting, were later published as 1,625,000. [37] Another notable production was a live re-make of the 1953 science-fiction serial The Quatermass Experiment, adapted from the original scripts into a single, two-hour version (though on the night it, in fact, underran considerably, lasting less than 1 hour 40 minutes), broadcast on the evening of Saturday 2 April 2005. Discounting BBC Four's previous live relays of theatrical Shakespeare productions, this was the first live made-for-television drama to be broadcast by the BBC for twenty years.

Another notable programme broadcast on BBC Four is Charlie Brooker's Screenwipe which contains reviews of current shows, as well as stories and commentary on how television is produced. The show is presented by broadcaster Charlie Brooker.

The channel is also curator and leader of the BBC Archive project whose aim is that the BBC's television archive is re-broadcast as much as appropriate so that the Archive can be enjoyed again and not isolated. [38]

Some output from BBC Four (documentaries rather than foreign films) was for a time repeated on BBC Two in a 'BBC Four on Two' branded area, although this was often in a late night broadcast slot after Newsnight and has since been discontinued.

According to BARB the comedy panel game QI has the highest ratings of any show on BBC Four. [39]

At the Edinburgh International Television Festival, BBC Four won the Non-Terrestrial Channel of the Year award in 2004, 2006 and 2012.

In 2012 Dirk Gently became the first continuing drama series produced for the channel. [40]

Since the initial closure of BBC Three as a linear TV channel, BBC Four is occasionally used to show live sports coverage. The channel aired games from the UEFA Euro 2016 and 2018 FIFA World Cup football tournaments when the final round of matches in the group stages took place (when matches in each group kick-off simultaneously). It has also been used to broadcast England women's football matches, as well as some matches from 2019 FIFA Women's World Cup. It also temporarily extended its broadcast hours to show live action from the 2016 Summer Olympics. [41]

As of 2022, BBC Four schedules still feature music programming (such as Top of the Pops and Neil Brand's documentaries) on a Friday night, [42] with drama imports on a Saturday (but not always foreign-language productions like Italian crime drama Inspector Montalbano) [43] [44] and usually an hour of 'archive' programmes (such as those by Bob Ross [45] and Fred Dibnah) [46] [47] [48] starting off the weekday schedule at 7pm. As well as programmes from the 1980s and 1990s, this early evening slot gives a chance for regional programmes to get a national airing with Cy Chadwick's Walking with... productions and Gareth Edwards’s Great Welsh Adventure (from BBC Wales) getting a repeat here and then again late night. [49] [50] In addition to these programmes, many hour long regional documentaries such as BBC Scotland's Rigs of Nigg, [51] [52] [53] [54] [55] about the 1970s North Sea oil drilling platform construction industry based around the Cromarty Firth, also received their national debut on the channel.

The following is a list of the ten most watched broadcasts on BBC Four since launch, based on Live +7 data supplied by BARB. [67] Number of viewers does not include repeats.

Availability outside the UK

BBC Four is widely available on cable, IPTV and digital satellite television in the Republic of Ireland, the Netherlands, Belgium, Switzerland and Liechtenstein. The channel is registered to broadcast within the European Union/EEA through the Luxembourg Broadcasting Regulator - ALIA. [68] [69]

When the channel first started airing, it used the slogan "Everybody Needs A Place To Think", but the BBC stopped using this several months after the launch. However the BBC Four logo and above slogan can be found, engraved on benches along the South Bank in London, between the London Eye and Waterloo Bridge.

On 10 September 2005, the channel began showing new idents comprising a central BBC Four logo surrounded by four quadrants which show different stages of the same footage thus making for a sort of optical illusion; for example, a swimming pool where a person on an inflatable ring appears in the bottom-left corner, though ripples don't enter the remaining quarters. Although the image appears as one at the start of the ident, by the end it is clearly four separate images.