From Wikipedia
(Redirected from Awkwardness)
https://en.wikipedia.org/wiki/Awkwardness
Emotional state that is associated with mild to severe levels of discomfort
For other uses, see Embarrassment (disambiguation).

Embarrassment or awkwardness is an emotional state that is associated with mild to severe levels of discomfort, and which is usually experienced when someone commits (or thinks of) a socially unacceptable or frowned-upon act that is witnessed by or revealed to others. Frequently grouped with shame and guilt, embarrassment is considered a “ self-conscious emotion,” and it can have a profoundly negative impact on a person’s thoughts or behavior. [1]

Usually, some perception of loss of honor or dignity (or other high-value ideals) is involved, but the embarrassment level and the type depends on the situation.

Embarrassment can be personal, caused by unwanted attention to private matters or personal flaws or mishaps or shyness. Some causes of embarrassment stem from personal actions, such as being caught in a lie or in making a mistake. In many cultures, being seen nude or inappropriately dressed is a particularly stressful form of embarrassment (see modesty). Personal embarrassment can also stem from the actions of others who place the embarrassed person in a socially awkward situation—such as a parent showing one's baby pictures to friends, having someone make a derogatory comment about one's appearance or behavior, discovering one is the victim of gossip, being rejected by another person (see also humiliation), being made the focus of attention (e.g., birthday celebrants, newlyweds), or even witnessing someone else's embarrassment.

Personal embarrassment is usually accompanied by some combination of blushing, sweating, nervousness, stammering, and fidgeting. Sometimes the embarrassed person tries to mask embarrassment with smiles or nervous laughter, especially in etiquette situations. Such a response is more common in certain cultures, which may lead to misunderstanding. There may also be feelings of anger depending on the perceived seriousness of the situation, especially if the individual thinks another person is intentionally causing the embarrassment. There is a range of responses, with the most minor being a perception of the embarrassing act as inconsequential or even humorous, to intense apprehension or fear.

The idea that embarrassment serves an apology or appeasement function originated with Goffman who argued the embarrassed individual "demonstrates that he/she is at least disturbed by the fact and may prove worthy at another time". [2] Semin and Manstead demonstrated social functions of embarrassment whereby the perpetrator of knocking over a sales display (the "bad act") was deemed more likable by others if he/she appeared embarrassed than if he/she appeared unconcerned – regardless of restitution behavior (rebuilding the display). [3] The capacity to experience embarrassment can also be seen as functional for the group or culture. It has been demonstrated that those who are not prone to embarrassment are more likely to engage in antisocial behavior – for example, adolescent boys who displayed more embarrassment were found less likely to engage in aggressive/delinquent behaviors. Similarly, embarrassment exhibited by boys more likely to engage in aggressive/delinquent behavior was less than one-third of that exhibited by non-aggressive boys. [4] Thus proneness to embarrassment (i.e., a concern for how one is evaluated by others) can act as a brake on behavior that would be dysfunctional for a group or culture.

Embarrassment can also be professional or official, especially after statements expressing confidence in a stated course of action, or willful disregard for evidence. Embarrassment increases greatly in instances involving official duties or workplace facilities, large amounts of money or materials, or loss of human life. Examples of causes include a government's failed public policy, exposure of corrupt practices or unethical behavior, [5] a celebrity whose personal habits receive public scrutiny or face legal action, or officials caught in serious personally embarrassing situations. Even small errors or miscalculations can lead to significantly greater official embarrassment if it is discovered that there was willful disregard for evidence or directives involved (e.g., see Space Shuttle Challenger). 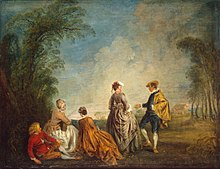 An embarrassing proposal by Antoine Watteau

Another typology, by Cupach and Metts, discusses the dimensions of intended-unintended and appropriate-inappropriate behavior, and four basic types of embarrassing circumstances:

The first known written occurrence of embarrass in English was in 1664 by Samuel Pepys in his diary. The word derives from the French word embarrasser, "to block" or "obstruct", [10] whose first recorded usage was by Michel de Montaigne in 1580. The French word was derived from the Spanish embarazar, whose first recorded usage was in 1460 in Cancionero de Stúñiga (Songbook of Stúñiga) by Álvaro de Luna. [11] The Spanish word comes from the Portuguese embaraçar, which is a combination of the prefix em- (from Latin im- for "in-") with baraço or baraça, "a noose" or "rope". [12] Baraça originated before the Romans began their conquest of the Iberian Peninsula in 218 BC. [11] Thus, baraça could be related to the Celtic word barr, "tuft". (Celtic people actually settled much of Spain and Portugal beginning in the 8th century BC) [13] However, it certainly is not directly derived from it, as the substitution of r for rr in Ibero-Romantic languages was not a known occurrence.

The Spanish word may come from the Italian imbarazzare, from imbarazzo, "obstacle" or "obstruction". That word came from imbarrare, "to block" or "bar", which is a combination of in-, "in" with barra, "bar" (from the Vulgar Latin barra, which is of unknown origin). [11] The problem with this theory is that the first known usage of the word in Italian was by Bernardo Davanzati (1529–1606), long after the word had entered Spanish. [14]

Embarrassing another person is considered to be a serious sin in Judaism. Rabbis quoted in the Babylonian Talmud state that embarrassing another person in public is akin to murder (literally "spilling blood"). Rabbi Naḥman bar Yitzḥak responds by noting how the analogy of "spilling blood" is apt since, when a person is embarrassed, their face becomes less flushed and more pale (after the initial flush). [15]

Wikiquote has quotations related to Embarrassment.