From Wikipedia
https://en.wikipedia.org/wiki/Attention_theft
Concept in marketing and psychology 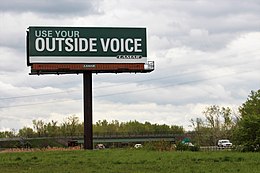 Billboards are a commonly cited example of attention theft.

Attention theft is a theory in economic sociology and psychology which describes situations in which marketers serve advertisements to consumers who have not consented to view them and who are given nothing in return. Perpetrators seek to distract targets with their advertising content, thereby commandeering their attention. [1] [2] [3]

Attention theft has been criticized as an example of unethical marketing. It is related to the concept of the attention economy, [1] which posits that attention is a scarce resource and applies economic theory to it. [3]

People are susceptible to attention theft because they tend by default to pay attention to whatever stimuli in their environment are most noticeable, a phenomenon known in psychology as exogenous orienting. [2] Advertisers are able to serve content deliberately engineered to be distracting, making it difficult to ignore. [2] [4] Examples of this type of content can include bold animations, crowded designs, and frequent or unnecessary notifications. [5] 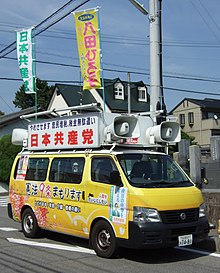 Sound trucks are frequently used in Japan to broadcast political or commercial messages.

Commonly cited examples of attention theft include billboards, apps that send out promotional notifications, sound trucks, email spam, and TV screens with mostly or entirely promotional content in locations with a captive audience, such as gas stations, airplanes, waiting rooms, and taxis. [1] [2] [6]

Critics of attention theft characterize it as a type of unethical marketing. [1] They argue that it contributes to information overload, leading to negative health outcomes, and infringes upon freedom of thought. [1] Writing in Wired in 2017, legal scholar Tim Wu urged municipal governments to pass laws prohibiting some instances of attention theft. [1] He and others fear that imminent technological advances may increase the pervasiveness of the phenomenon. [1] [2]