From Wikipedia, the free encyclopedia
Pattern of stars recognized on Earth's night sky 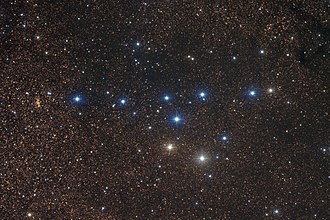 A picture of stars, with a group of appearingly bright blue and white stars. The bright stars together are identified as the asterism Coathanger resembling a coathanger, in the constellation Vulpecula.

Asterisms range from simple shapes of just a few stars to more complex collections of many stars covering large portions of the sky. The stars themselves may be bright naked-eye objects or fainter, even telescopic, but they are generally all of a similar brightness to each other. The larger brighter asterisms are useful for people who are familiarizing themselves with the night sky.

The patterns of stars seen in asterisms are not necessarily a product of any physical association between the stars, but are rather the result of the particular perspectives of their observations. For example the Summer Triangle is a purely observational physically unrelated group of stars, but the stars of Orion's Belt are all members of the Orion OB1 association and five of the seven stars of the Big Dipper are members of the Ursa Major Moving Group. Physical associations, such as the Hyades or Pleiades, can be asterisms in their own right and part of other asterisms at the same time.

Background of asterisms and constellations

In many early civilizations, it was already common to associate groups of stars in connect-the-dots stick-figure patterns; some of the earliest records are those of ancient India in the Vedanga Jyotisha and the Babylonians.[ citation needed] This process was essentially arbitrary, and different cultures have identified different constellations, although a few of the more obvious patterns tend to appear in the constellations of multiple cultures, such as those of Orion and Scorpius. As anyone could arrange and name a grouping of stars there was no distinct difference between a constellation and an asterism. e.g. Pliny the Elder (23–79 AD) in his book Naturalis Historia refers and mentions 72 asterisms. [3]

A general list containing 48 constellations likely began to develop with the astronomer Hipparchus (c. 190 – c. 120 BC ), and was mostly accepted as standard in Europe for 1,800 years. As constellations were considered to be composed only of the stars that constituted the figure, it was always possible to use any leftover stars to create and squeeze in a new grouping among the established constellations.[ citation needed]

Furthermore, exploration by Europeans to other parts of the globe exposed them to stars unknown to them. Two astronomers particularly known for greatly expanding the number of southern constellations were Johann Bayer (1572–1625) and Nicolas Louis de Lacaille (1713–1762). Bayer had listed twelve figures made out of stars that were too far south for Ptolemy to have seen; Lacaille created 14 new groups, mostly for the area surrounding South Celestial Pole. Many of these proposed constellations have been formally accepted, but the rest have historically remained as asterisms.[ citation needed]

In 1928, the International Astronomical Union (IAU) precisely divided the sky into 88 official constellations following geometric boundaries encompassing all of the stars within them. Any additional new selected groupings of stars or former constellations are often considered as asterisms. However, depending on the particular literature source, any technical distinctions between the terms 'constellation' and 'asterism' often remain somewhat ambiguous.[ citation needed] 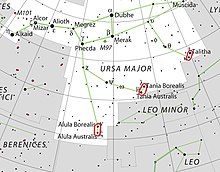 Three Leaps of the Gazelle asterism

Some asterisms refer to portions of traditional constellation figures. These include: 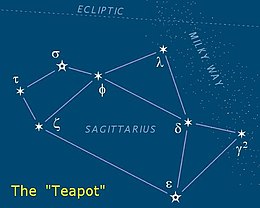 The "Teapot" asterism in Sagittarius. The Milky Way appears as "steam" coming from the spout.

Other asterisms are also composed of stars from one constellation, but do not refer to the traditional figures.

Other asterisms that are formed from stars in more than one constellation. 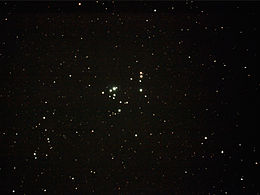 Asterisms range from the large and obvious to the small, and even telescopic.