From Wikipedia
https://en.wikipedia.org/wiki/Aspergillus
Genus of fungi

Aspergillus was first catalogued in 1729 by the Italian priest and biologist Pier Antonio Micheli. Viewing the fungi under a microscope, Micheli was reminded of the shape of an aspergillum (holy water sprinkler), from Latin spargere (to sprinkle), and named the genus accordingly. [1] Aspergillum is an asexual spore-forming structure common to all Aspergillus species; around one-third of species are also known to have a sexual stage. [2] While some species of Aspergillus are known to cause fungal infections, others are of commercial importance.

Aspergillus consists of 837 species of fungi. [3]

Aspergillus on a tomato in detail

Members of the genus possess the ability to grow where a high osmotic pressure exists (high concentration of sugar, salt, etc.). Aspergillus species are highly aerobic and are found in almost all oxygen-rich environments, where they commonly grow as molds on the surface of a substrate, as a result of the high oxygen tension. Commonly, fungi grow on carbon-rich substrates like monosaccharides (such as glucose) and polysaccharides (such as amylose). Aspergillus species are common contaminants of starchy foods (such as bread and potatoes), and grow in or on many plants and trees.[ citation needed]

In addition to growth on carbon sources, many species of Aspergillus demonstrate oligotrophy where they are capable of growing in nutrient-depleted environments, or environments with a complete lack of key nutrients. Aspergillus niger is a prime example of this; it can be found growing on damp walls, as a major component of mildew.

Several species of Aspergillus, including A. niger and A. fumigatus, will readily colonise buildings, [4] favouring warm and damp or humid areas such as bathrooms and around window frames. [5]

Aspergillus are found in millions in pillows. [6] 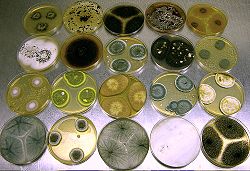 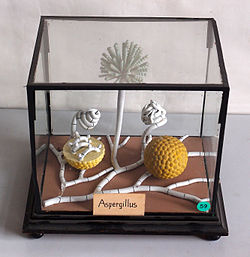 Species of Aspergillus are important medically and commercially. Some species can cause infection in humans and other animals. Some infections found in animals have been studied for years, while other species found in animals have been described as new and specific to the investigated disease, and others have been known as names already in use for organisms such as saprophytes. More than 60 Aspergillus species are medically relevant pathogens. [7] For humans, a range of diseases such as infection to the external ear, skin lesions, and ulcers classed as mycetomas are found.

Other species are important in commercial microbial fermentations. For example, alcoholic beverages such as Japanese sake are often made from rice or other starchy ingredients (like manioc), rather than from grapes or malted barley. Typical microorganisms used to make alcohol, such as yeasts of the genus Saccharomyces, cannot ferment these starches. Therefore, koji mold such as Aspergillus oryzae is used to first break down the starches into simpler sugars. [8]

Members of the genus are also sources of natural products that can be used in the development of medications to treat human disease. [9] Aspergillus spp. are known to produce anthraquinone which has commercial importance due to its antibacterial and antifungal properties. [10]

Perhaps the largest application of Aspergillus niger is as the major source of citric acid; this organism accounts for over 99% of global citric acid production, or more than 1.4 million tonnes (>1.5 million US tons) per year.[ citation needed] A. niger is also commonly used for the production of native and foreign enzymes, including glucose oxidase, lysozyme, and lactase. [11] In these instances, the culture is rarely grown on a solid substrate, although this is still common practice in Japan, but is more often grown as a submerged culture in a bioreactor. In this way, the most important parameters can be strictly controlled, and maximal productivity can be achieved. This process also makes it far easier to separate the chemical or enzyme of importance from the medium, and is therefore far more cost-effective.

Four three-day-old Aspergillus colonies. Clockwise from top-left: an A. nidulans laboratory strain; a similar strain with a mutation in the yA marker gene involved in green pigmentation; an A. oryzae strain used in soy fermentation; A. oryzae RIB40 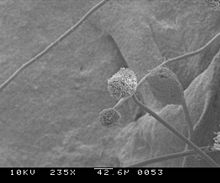 A. nidulans (Emericella nidulans) has been used as a research organism for many years and was used by Guido Pontecorvo to demonstrate parasexuality in fungi. Recently, A. nidulans was one of the pioneering organisms to have its genome sequenced by researchers at the Broad Institute. As of 2008, a further seven Aspergillus species have had their genomes sequenced: the industrially useful A. niger (two strains), A. oryzae, and A. terreus, and the pathogens A. clavatus, A. fischerianus (Neosartorya fischeri), A. flavus, and A. fumigatus (two strains). [12] A. fischerianus is hardly ever pathogenic, but is very closely related to the common pathogen A. fumigatus; it was sequenced in part to better understand A. fumigatus pathogenicity. [13]

Of the 250 species of aspergilli, about 64% have no known sexual state. [14] However, many of these species likely have an as yet unidentified sexual stage. [14] Sexual reproduction occurs in two fundamentally different ways in fungi. These are outcrossing (in heterothallic fungi) in which two different individuals contribute nuclei, and self-fertilization or selfing (in homothallic fungi) in which both nuclei are derived from the same individual. In recent years, sexual cycles have been discovered in numerous species previously thought to be asexual. These discoveries reflect recent experimental focus on species of particular relevance to humans.

A. fumigatus is the most common species to cause disease in immunodeficient humans. In 2009, A. fumigatus was shown to have a heterothallic, fully functional sexual cycle. [15] Isolates of complementary mating types are required for sex to occur.

A. flavus is the major producer of carcinogenic aflatoxins in crops worldwide. It is also an opportunistic human and animal pathogen, causing aspergillosis in immunocompromised individuals. In 2009, a sexual state of this heterothallic fungus was found to arise when strains of opposite mating types were cultured together under appropriate conditions. [16]

A. lentulus is an opportunistic human pathogen that causes invasive aspergillosis with high mortality rates. In 2013, A. lentulus was found to have a heterothallic functional sexual breeding system. [17]

A. terreus is commonly used in industry to produce important organic acids and enzymes, and was the initial source for the cholesterol-lowering drug lovastatin. In 2013, A. terreus was found to be capable of sexual reproduction when strains of opposite mating types were crossed under appropriate culture conditions. [18]

These findings with Aspergillus species are consistent with accumulating evidence, from studies of other eukaryotic species, that sex was likely present in the common ancestor of all eukaryotes. [19] [20]

The simultaneous publication of three Aspergillus genome manuscripts in Nature in December 2005 established the genus as the leading filamentous fungal genus for comparative genomic studies. Like most major genome projects, these efforts were collaborations between a large sequencing centre and the respective community of scientists. For example, the Institute for Genome Research (TIGR) worked with the A. fumigatus community. A. nidulans was sequenced at the Broad Institute. A. oryzae was sequenced in Japan at the National Institute of Advanced Industrial Science and Technology. The Joint Genome Institute of the Department of Energy has released sequence data for a citric acid-producing strain of A. niger. TIGR, now renamed the J. Craig Venter Institute, is currently spearheading a project on the A. flavus genome. [24]

Aspergillus is characterized by high levels of genetic diversity and, using protostome divergence as a scale, is as diverse as the Vertebrates phylum although both inter and intra-specific genome structure is relatively plastic. [25] The genomes of some Aspergillus species, such as A. flavus and A. oryzae, are more rich and around 20% larger than others, such as A. nidulans and A. fumigatus. Several mechanisms could explain this difference, although the combination of segmental duplication, genome duplication, and horizontal gene transfer acting in a piecemeal fashion is well-supported. [26]

Some Aspergillus species cause serious disease in humans and animals. The most common pathogenic species are A. fumigatus and A. flavus, which produces aflatoxin which is both a toxin and a carcinogen, and which can contaminate foods such as nuts. The most common species causing allergic disease are A. fumigatus and A. clavatus. Other species are important as agricultural pathogens. Aspergillus spp. cause disease on many grain crops, especially maize, and some variants synthesize mycotoxins, including aflatoxin. Aspergillus can cause neonatal infections. [27]

A. fumigatus (the most common species) infections are primary pulmonary infections and can potentially become a rapidly necrotizing pneumonia with a potential to disseminate. The organism can be differentiated from other common mold infections based on the fact that it takes on a mold form both in the environment and in the host (unlike Candida albicans which is a dimorphic mold in the environment and a yeast in the body).

Aspergillosis is the group of diseases caused by Aspergillus. The most common species among paranasal sinus infections associated with aspergillosis is A. fumigatus. [28] The symptoms include fever, cough, chest pain, or breathlessness, which also occur in many other illnesses, so diagnosis can be difficult. Usually, only patients with already weakened immune systems or who suffer other lung conditions are susceptible.

Fungal infections from Aspergillus spores remain one theory of sickness and untimely death of some early Egyptologists and tomb explorers. Ancient spores which grew on the remains of food offerings and mummies sealed in tombs and chambers may have been blown around and inhaled by the excavators, ultimately linked to the notion of the curse of the pharaohs. [31]

Aspergillosis of the air passages is also frequently reported in birds, and certain species of Aspergillus have been known to infect insects. [7]