An art centre or arts center is distinct from an art gallery or art museum. An arts centre is a functional community centre with a specific remit to encourage arts practice and to provide facilities such as theatre space, gallery space, venues for musical performance, workshop areas, educational facilities, technical equipment, etc. [1]

In the United States, "art centers" are generally either establishments geared toward exposing, generating, and making accessible art making to arts-interested individuals, or buildings that rent primarily to artists, galleries, or companies involved in art making.

In Britain, the Bluecoat Society of Arts was founded in Liverpool in 1927 following the efforts of a group of artists and art lovers who had occupied Bluecoat Chambers since 1907. [2] Most British art centres began after World War II and gradually changed from mainly middle-class places to 1960s and 1970s trendy, alternative centres and eventually in the 1980s to serving the whole community with a programme of enabling access to wheelchair users and disabled individuals and groups.

In the rest of Europe it is common among most art centres that they are partly government funded, since they are considered to have a positive influence on society and economics according to the Rhineland model philosophy. Many of those organisations started in the 1970s, 1980s and 1990s as squatted spaces and were later legalized. 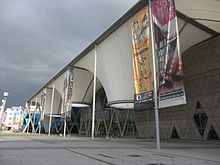