Ariadne ( /ˌæriˈædni/; Greek: Ἀριάδνη; Latin: Ariadne) was a Cretan princess in Greek mythology. She was mostly associated with mazes and labyrinths because of her involvement in the myths of the Minotaur and Theseus. She is best known for having helped Theseus escape the Minotaur but being abandoned by him on the island of Naxos; subsequently, she became the wife of Dionysus. (There are many other versions of her myth.)

The ancient Roman author Hyginus identified Ariadne as the Roman Libera/ Proserpina at approximately the same time as Libera was officially identified with Proserpina in 205 BC, these two names becoming synonymous for the same goddess. Hyginus equated Libera/Proserpina with Ariadne as bride to Liber whose Greek equivalent was Dionysus, the husband of Ariadne. [1]

Greek lexicographers in the Hellenistic period claimed that Ariadne is derived from the ancient Cretan dialectical elements ari (ἀρι-) "most" (which is an intensive prefix) and adnós (ἀδνός) "holy". [2] Conversely, Stylianos Alexiou has argued that despite the belief being that Ariadne's name is of Indo-European origin, it's actually pre-Greek. [3]

Linguist Robert S. P. Beekes has also supported Ariadne having a pre-Greek origin; specifically being Minoan from Crete. This being due to her name containing the sequence dn (δν), which is rare in Indo-European languages, indicating that it is a Minoan loanword. [4]

Ariadne was the daughter of Minos, the King of Crete [5] and son of Zeus, and of Pasiphaë, Minos' queen and daughter of Helios. [6] Others denominated her mother " Crete", daughter of Asterius, the husband and King of Europa. Ariadne was the sister of Acacallis, Androgeus, Deucalion, Phaedra, Glaucus, Xenodice, and Catreus. [7] Through her mother, Pasiphaë, she was also the half-sister of the Minotaur.

Minos put Ariadne in charge of the labyrinth where sacrifices were made as part of reparations either to Poseidon or Athena, depending on the version of the myth; later, she helped Theseus conquer the Minotaur and save the victims from sacrifice. In other narrations she was the bride of Dionysus, her status as mortal or divine varying in those accounts. [11] [12]

Because ancient Greek myths were orally transmitted, like other myths, that of Ariadne has many variations. [13] According to an Athenian version, Minos attacked Athens after his son was killed there. The Athenians asked for terms and were required to sacrifice 7 young men and 7 maidens to the Minotaur every 7 or 9 years. One year, the sacrificial party included Theseus, the son of King Aegeus, who volunteered to kill the Minotaur. Ariadne fell in love with him at first sight and provided him a sword and ball of thread (ο Μίτος της Αριάδνης, "Ariadne's string") so that he could retrace his way out of the labyrinth of the Minotaur.

Ariadne betrayed her father and her country for her lover Theseus. [14] She eloped with Theseus after he killed the Minotaur, yet according to Homer in the Odyssey "he had no joy of her, for ere that, Artemis slew her in seagirt Dia because of the witness of Dionysus". [15] Most accounts claim that Theseus abandoned Ariadne, and in some versions Perseus mortally wounds her. According to some, Dionysus claimed Ariadne as wife, therefore causing Theseus to abandon her. Homer does not elaborate on the nature of Dionysus' accusation, yet the Oxford Classical Dictionary speculated that she was already married to him when she eloped with Theseus. 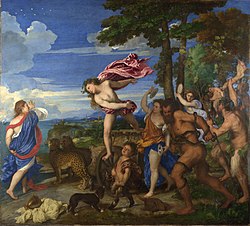 Bacchus and Ariadne by Titian: Dionysus discovers Ariadne on the shore of Naxos. The painting also depicts the constellation named after Ariadne.

In Hesiod and most other versions, Theseus abandoned Ariadne sleeping on Naxos, and Dionysus rediscovered and wedded her. In a few versions of the myth, [16] Dionysus appeared to Theseus as they sailed from Crete, saying that he had chosen Ariadne as his wife and demanding that Theseus leave her on Naxos for him; this had the effect of absolving the Athenian cultural hero of desertion. The vase painters of Athens often depicted Athena leading Theseus from the sleeping Ariadne to his ship.

She bore Dionysus famous children including Oenopion, Staphylus, and Thoas. Her wedding diadem was set in the heavens as the constellation Corona Borealis. Ariadne was faithful to Dionysus. Perseus killed her at Argos by turning her to stone with the head of Medusa during Perseus' war with Dionysus. [17] In the Odyssey, [18] it is told that Artemis killed her. In other myths she hanged herself from a tree, like Erigone and the hanging Artemis, a Mesopotamian theme.[ citation needed]. Dionysus then went to Hades, and brought her and his mother Semele to Mount Olympus, where they were deified. [19] Some scholars have posited, because of her associations with thread spinning and winding, that she was a weaving goddess, like Arachne, and support this theory with the mytheme of the Hanged Nymph (see weaving in mythology).[ citation needed] 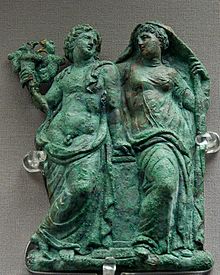 Ariadne as the consort of Dionysus: bronze appliqué from Chalki, Rhodes, late fourth century BCE, in the Musée du Louvre

Karl Kerenyi and Robert Graves theorized that Ariadne, whose name they thought derived from Hesychius' enumeration of "Άδνον", a Cretan-Greek form of "arihagne" ("utterly pure"), was a Great Goddess of Crete, "the first divine personage of Greek mythology to be immediately recognized in Crete", [20] once archaeological investigation began. Kerenyi observed that her name was merely an epithet and claimed that she was originally the "Mistress of the Labyrinth", both a winding dancing ground and, in the Greek opinion, a prison with the dreaded Minotaur in its centre. Kerenyi explained that a Linear B inscription from Knossos "to all the gods, honey ... [,] to the mistress of the labyrinth honey" in equal amounts, implied to him that the Mistress of the Labyrinth was a Great Goddess in her own right. [21] Professor Barry Powell suggested that she was the Snake Goddess of Minoan Crete. [22]

Plutarch, in his vita of Theseus, which treats him as a historical person, reported that in contemporary Naxos was an earthly Ariadne, who was distinct from a divine one:

Some of the Naxians also have a story of their own, that there were two Minoses and two Ariadnes, one of whom, they say, was married to Dionysos in Naxos and bore him Staphylos and his brother, and the other, of a later time, having been carried off by Theseus and then abandoned by him, came to Naxos, accompanied by a nurse named Korkyne, whose tomb they show; and that this Ariadne also died there.

In a kylix by the painter Aison (circa 425 to circa 410 BCE) [23] Theseus drags the Minotaur from a temple-like labyrinth, yet the goddess who attends him in this Attic representation is Athena. 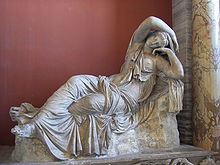 An ancient cult of Aphrodite-Ariadne was observed at Amathus, Cyprus, according to the obscure Hellenistic mythographer Paeon of Amathus; his works are lost, but his narrative is among the sources that Plutarch cited in his vita of Theseus (20.3-5). According to the myth that was current at Amathus, the second most important Cypriote cult centre of Aphrodite, Theseus' ship was swept off course and the pregnant and suffering Ariadne put ashore in the storm. Theseus, attempting to secure the ship, was inadvertently swept out to sea, thus being absolved of abandoning Ariadne. The Cypriote women cared for Ariadne, who died in childbirth and was memorialized in a shrine. Theseus, overcome with grief upon his return, left money for sacrifices to Ariadne and ordered two cult images, one of silver and one of bronze, erected. At the observation in her honour on the second day of the month Gorpiaeus, a young man lay on the ground and vicariously experienced the throes of labour. The sacred grove in which the shrine was located was denominated the "Grove of Aphrodite-Ariadne". [24] According to Cypriote legend, Ariadne's tomb was located within the temenos of the sanctuary of Aphrodite-Ariadne. [25] The primitive nature of the cult at Amathus in this narrative appears to be much older than the Athenian sanctioned shrine of Aphrodite, who at Amathus received "Ariadne" (derived from "hagne", "sacred") as an epithet.

Ariadne, in Etruscan Areatha, is paired with Dionysus, in Etruscan " Fufluns", on Etruscan engraved bronze mirror backs, where the Athenian cultural hero Theseus is absent, and Semele, in Etruscan " Semla", as mother of Dionysus, may accompany the pair, [26] lending an especially Etruscan air [27] of familial authority.