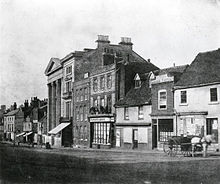 The first permanent photograph, View from the Window at Le Gras by Nicéphore Niépce, was also the first architectural photograph as it was a view of buildings. Similarly, photographs taken by early photographer William Henry Fox Talbot were of architecture, including his photograph of a Latticed window in Lacock Abbey taken in 1835.[ citation needed]

Throughout the history of photography, architectural structures including buildings have been highly valued photographic subjects, mirroring society's appreciation for architecture and its cultural significance. By the 1860s, architectural photography started to become an established visual medium.

By the early 1950s, architects were hiring more photographers for commissioned work, resulting in architectural photography being viewed as more of an art form than what it had been considered before. [1]

A tenet of architectural photography is the use of perspective control, with an emphasis on vertical lines that are non-converging (parallel). This is achieved by positioning the focal plane of the camera at so that it is perpendicular to the ground, regardless of the elevation of the camera eye. This result can be achieved by the use of view cameras, tilt/shift lenses, or post-processing.

Traditionally, view cameras have been used for architectural photography as they allow for the lens to be tilted or shifted relative to the film plane. This allows for control of perspective, as well as a variety of creative possibilities.

In a similar fashion to landscape photography, a deep depth of field is usually employed so that both the foreground and background (to infinity) are in sharp focus.

When shooting interior and exterior photography is important to shoot in a wide-angle lens.

Architectural photography typically shows either the exterior or the interior of buildings. The techniques used in each of these types of photography are similar, but do have some difference and sometimes require different equipment depending upon the requirements. 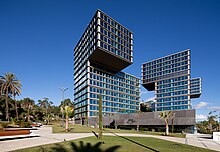 Example of an exterior architectural photograph

Exterior architectural photography usually takes advantage of available light by day, or at night it uses ambient light from adjacent street lights, landscape lights, exterior building lights, moonlight and even twilight present in the sky in all but the darkest situations.

In many cases, the landscaping surrounding a building is important to the overall composition of a photograph, and even necessary to communicate the aesthetic harmony of a building with its environment. The photographer will often include flowers, trees, fountains or statues in the foreground of a composition, taking advantage of their ability to help lead the eye into the composition and to its main subject, the building.

Aerial photography is trending as it shows different and unique perspectives of the structure being photographed. This can include getting level with the structure, showing property boundaries, revealing the location in a geographical view point, and putting context to surrounding scenery.

Interior architectural photography can also be performed with ambient light transmitted through windows and skylights, as well as interior lighting fixtures. Frequently though, architectural photographers use supplemental lighting to improve the illumination within a building. Either electronic flash "strobes" or incandescent "hot lights" are generally used. A feature of architectural photography is that the principal subjects almost always remains stationary. It is therefore possible to use post-processing editing to achieve a balanced lighting scheme, even in the absence of additional lighting.

This combination of using natural light and artificial light is sometimes described as "flambient lighting" - a combination of the words "flash" and "ambient". The key is not letting one of the light sources over power the other. If used properly and blended well in post-processing, the result is the best lighting possible for interior photography. [3]

The architectural detail of a building shows a closer view of the texture and material from which they are built. This type of closer framing provides additional information on the materiality, usability and finishes of the building or property.